"Game of Thrones": The magic of the Starks is survival

That which does not kill us makes us stronger. If that's true, the Starks are the hardest family in Westeros 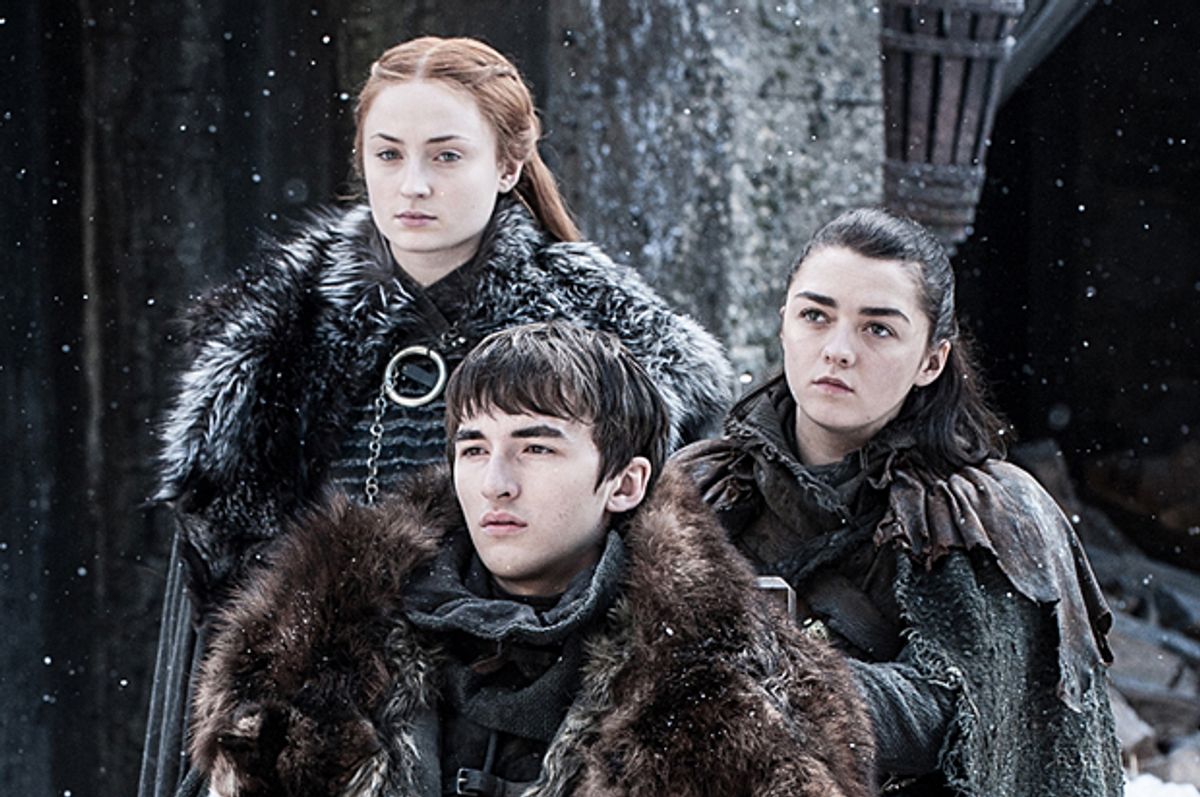 Many of us have had our Sansa Stark moment. Perhaps it hit you in the presence of family. Maybe yours struck while in the company of friends. But we’ve all witnessed or experienced what must have washed over Lady Stark (Sophie Turner) on a recent “Game of Thrones” episode, shortly after she reunited with her younger siblings Bran (Isaac Hempstead Wright) and Arya (Maisie Williams).

It’s that feeling that dawns on a person when she realizes that, despite the ways fate has twisted her, despite the constant drone of whispered curses from those demons nestled in the memory's crevices, compared to the rest of her relatives, she's the Marilyn Munster of the bunch. The normal one.

The weight of that knowledge can be suffocating.

The seventh season shows Sansa Stark coming into her own, insisting on being heard and respected by Jon Snow (Kit Harington), who she still believes to be her illegitimate half-brother. At his side Sansa has reclaimed her agency and asserts herself as a leader familiar with the enemy's tactics. Where Jon preaches diplomacy, Sansa is not having it. And when Sansa was left in charge of Winterfell, she rose to fulfill her duty by preparing for the terrors she knew were coming. She was on top of things and in charge for the first time in her tortured life.

Then her siblings come home.

First, Bran arrives with Meera Reed (Ellie Kendrick), and soon enough everybody can see he's not at all himself. He confirms this, announcing there is no Brandon Stark anymore, only the Three-Eyed Raven, and soon after Meera leaves in tears declaring, “You died in that cave."

Not long afterward comes Arya, whom the dimwitted guards at the gate mistake for a waif. She gets into Winterfell anyway, and when Sansa asks her what she's been up to she calmly replies, in so many words, "Oh, well . . .  training, chillin', killin'. You know, doing how I do. Doing me!"

Sansa has a lot to process and no time in which to do it.

This seventh season's plots revolve around survival more intensely than those of the previous season of "Game of Thrones," especially among key characters. When Jaime (Nikolaj Coster-Waldau) and Cersei (Lena Headey) reunite in the season premiere Cersei draws strength from knowing they’re all that’s left of the Lannisters — as far as the two of them know — while Jaime sees this as a warning. Daenerys (Emilia Clarke), meanwhile, makes a grand speech in the third episode enumerating all she’s endured.

“I spent my life in foreign lands. So many men have tried to kill me, I don’t even remember all of their names,” she smoothly tells Jon Snow as he stands before her in Dragonstone’s throne room. “I have been sold like brood mare. I have been . . . raped, and defiled. Do you know what kept me standing through all those years in exile? Faith. Not in any gods. Not in myths or legends. In myself. In Daenerys Targaryen.”

She speaks the truth: The Mother of Dragons suffers mightily in earlier seasons. No need to urge her on; she's already in flight. Watching her transform her pain into an instrument of will is a chief reason that many people continue to put up with this show's various aggravations.

Cersei, for her part, is marched through King’s Landing shorn, naked and shamed; the commoners cover her with garbage and spit. And yeah, that was terrible but, um, she brought it on herself . . . didn't she? Jaime hasn't emerged from King's Landing unscathed, either. In the field, an enemy cuts off his sword hand for sport, forcing him to reassess how much of his identity is wrapped him in his skills as a warrior. That was several seasons ago. Now, all of these characters qualify as survivors.

But the Starks are a different breed altogether, forged in the fire of betrayal and trauma, unjustly burdened with the stain of treason. The Sansa of earlier seasons sustains everything Daenerys speaks of and more: she was awarded a front-row seat to her father’s beheading and had the delicacy beaten out of her by two different psychopaths. Eventually she was raped on her wedding night as her father's ward, a boy she grew up with, was made to watch.

If survival is a superpower in Westeros, Sansa is a high-level player prepared to contend with anything fate and the long winter has to throw at her, including death. Sansa lived through these indignities, escaped, and psychologically regrouped.

But what leaders like Sansa don’t need are unpredictable factors in their midst. And season 7’s fourth episode, “The Spoils of War,” depicts Sansa's discovery that her little sister Arya, the tomboy with whom she squabbled in a past life, has matured into a cold-blooded killer herself.

During their first exchange, when Arya meets Sansa in the silent crypt beneath Winterfell, Arya mentions her kill list as casually as she’d chat about the weather and flatly admits to feeling angry when she heard someone had offed Joffrey before she could. “However long my list got,” Arya says, “he was always first.”

Coming out of the mouth of a skinny girl, that sounds farfetched. She has to be joking, right? Everybody to whom Arya reveals her intentions thinks so. (The only one who didn't was the Hound.) So Sansa giggles at what she assumes to be her little sister's dark fantasy. One of the pleasures of the current season is to see Williams mirror people as they laugh off her honest reports of all the murders she’s premeditating; the actress somehow makes Arya’s smile bright and girlish while maintaining a hard chill in her gaze.

Next to Wright’s Bran — also known as the Teen Formerly Known as Stark —Arya is lithe, lively and dangerous. Bran’s a key character designed to expedite the progression of certain game-changing plot points, but Wright's portrayal makes him the flattest emo oddball in school. If Sansa doesn’t seem starved for much togetherness time with him, we totally get it.

But a person can also understand if she’s contemplating who it is, exactly, that she's welcomed into her home.

Bringing Arya and Bran together at last raises the stakes for the Starks and for the seventh season plot, and it’s satisfying to see two first-hand practitioners of mystical abilities recognize each other’s power. Appropriately, Bran divines that his prodigal sister has returned before he lays eyes on her, since he literally saw her coming in his astral projections. And Arya expresses little in the way of shock at finding out her brother has otherworldly visions; the unusual is standard for Arya, a girl who wears the faces of dead people.

What can Sansa possibly say or do in the face of such extraordinariness? Watch, and assess. Some social media memes joked about Sansa looking jealous while watching Arya fight the tall, muscular Brienne to a draw using a much smaller sword and a dagger.

But I don’t believe it’s envy that informs Sansa’s expression in that scene. As the Lady of Winterfell observes her petite sibling demonstrate that she wasn't kidding about her kill list, maybe it dawns on Sansa that although she herself is harder than where she began, there’s another level of toughness she can't even begin to fathom.

That’s a look of concern in Sansa's eyes, maybe with a side of mortification.

By the end of “The Spoils of War,” Arya still hasn’t fully reported where she’s been and what she learned during her lost years. Sansa only reveals that her story is long and unpleasant, which Arya meets by saying hers was too.

Then they reassure each other that their stories aren’t over yet. Such a brief, simple line, but a fortifying refrain familiar to those who persevere.