Additional heat is responsible for 59,300 suicides since 1980 — causing financial hardships due to crop loss 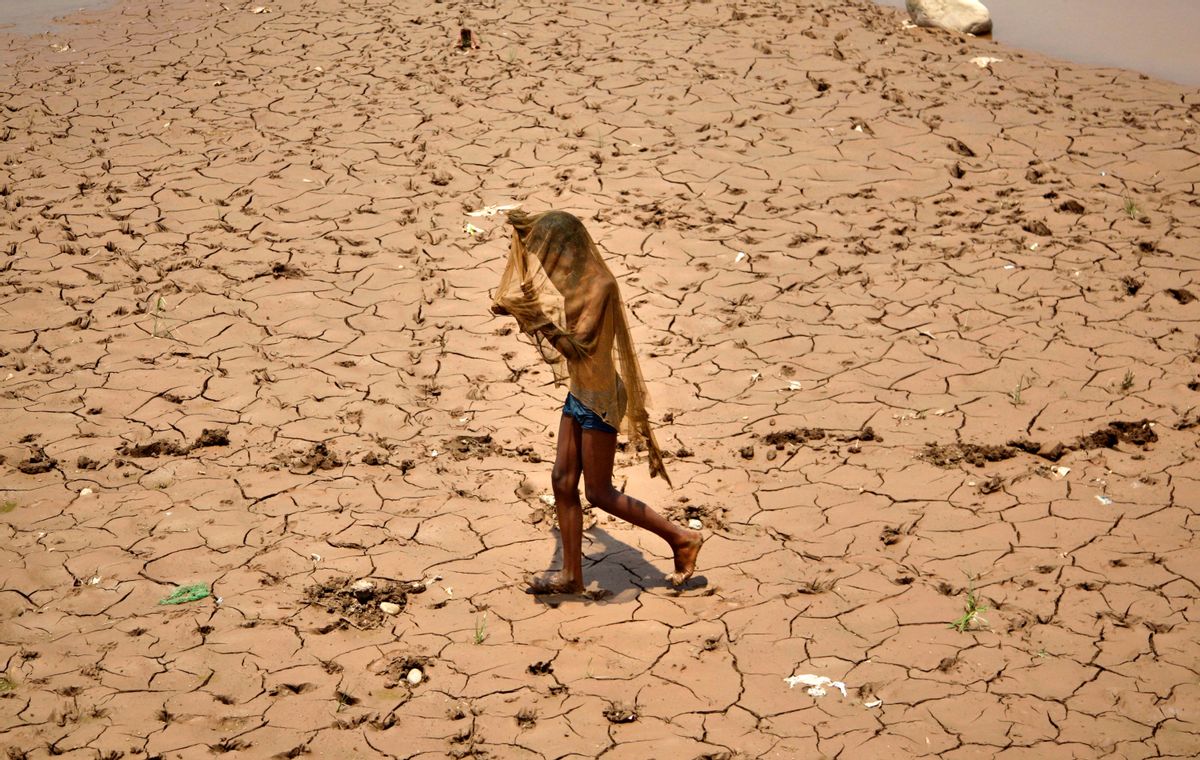 FILE - In this Saturday, June 1, 2013, file photo, a young Indian covers his face to protect from the heat as he walks on a dried bed of the River Tawi on a hot summer day in Jammu, India. India is launching programs to protect people from extreme heat in two high-risk cities, after a devastating heat wave killed at least 2,500 people across the country last year. (AP Photo/Channi Anand, file)
--

A suicide epidemic among India’s farmers has shaken the country and contributed to a doubling of the nation’s suicide rate since 1980.

It’s a widespread and intensely personal issue, one that has been difficult to tease out the root source. Debt, mental health, lack of social services, weather vagaries and even media coverage have all been put forward as part of the problem. Now, recent research published in the Proceedings of the National Academy of Sciences suggests that climate change could also be playing a role.

The findings attribute more than 59,000 suicides in India to rising temperatures since 1980. With the world expected to warm further, the results suggest that adaptation could play a key role in helping farmers.

“Suicide is a heartbreaking indicator of human hardship, and I felt that if this phenomenon were in fact affected by a changing climate, it would be essential to quantify its effect and consider this relationship as we build climate policy for the future,” Tamma Carleton, a PhD student at the University of California, Berkeley who authored the new study, said.

Agriculture makes up 14 percent of India’s GDP, but employs 230 million people or 32 percent of the rural population. Roughly two-thirds of those farmers have poor access to irrigation and rely on rainfed agriculture, itself a crapshoot tied to the Indian monsoon. That leaves them vulnerable to not just drought but other climate shocks like rising temperatures.

“These farmers and agricultural workers face extremely stressful and difficult conditions,” Carleton said. “In this risky environment where families are very poor, any additional shock can lead to extreme economic destitution, and some individuals may cope with that hardship by committing suicide. I find that the climate, and temperature in particular, causes crop losses while also elevating the risk of suicide.”

The study shows that there’s a strong link between high temperatures in the growing season and suicide rates. Carleton found that degree days above 68°F (20°C) was a key threshold for suicide rates in India. By looking at the increase in degree days above 68°F since 1980, she was able to tease out how many additional suicides across India have likely been due to rising temperatures. Her results show the additional heat is responsible for 59,300 suicides since 1980, accounting for about 7 percent of the overall increase.

Rising temperatures essentially act as a threat multiplier, similar to how the military views climate change. Rather than directly causing suicides just because it’s hot out, Carleton’s work suggests that hotter weather can have knock-on effects like reducing crop yields and increasing financial hardship.

Future warming will only further increase these risks. A World Bank report suggests that India may have to double its grain imports in order to cope with a 3.6°F (2°C) warming that could reduce yields 12 percent even as the population swells. With 7.2°F (4°C) of warming, agricultural production could be severely curtailed in parts of south India, the region Carleton’s research shows has had the biggest uptick in suicides in response to hot weather.

Outside researchers called the results a provocative addition to the discussion while also saying they’re in need of refinement.

“The notion that (climate change) will increase the rates of self-harm in India is likely correct,” Andrew Paul Gutierrez, a retired researcher who has studied farmer suicides extensively, said. “Climate change will affect crops production and may increase economic distress, and hence it is not unexpected that suicides would increase, especially in a society like India with its webbed nuance of social ecological, and economic factors of Indian agricultural society . . . but the situation is considerably more nuanced than climate warming.”

Gutierrez’s work has pointed to seven factors that influence farmer suicides in India. Chief among them is the arrival of Bt cotton, a genetically modified cotton, in India in 2002.The cotton costs more and requires different pesticides that increased the risk of farmers falling into bankruptcy.

While Bt cotton isn’t necessarily the main driver of farmer suicides, Gutierrez said the new study’s focus on temperature misses some of these important economics and social factors.

Anoop Sadanandan, a social scientist at Syracuse, called the findings “striking.” He noted, though, that the findings cover suicides across India and not just farmers, who account for for roughly 10 percent of all suicides in India.

“One has to be very careful when drawing conclusions,” he said. “It is plausible that the lower crop yields affect not merely the people directly engaged in the farm sector, but also the wider Indian population.”

Despite the criticism, he said the study showed a new pathway for research into the nuances of suicide not just among farmers but the population as a whole in India.

Carleton herself is well aware of the limitations of her approach. She said the study isn’t meant to be a panacea or suggest climate adaptation is the only way to address India’s farmer suicides.

“Suicide is an incredibly complex phenomenon, and any individual suicide is likely to have many causes,” she said. “This study shows that climate events elevate the risk of suicide in India, acting as a threat multiplier to all existing suicide drivers. This means that addressing climate change impacts is by no means the only focus one should have when seeking to reduce the number of suicides.”