Are robots moving sculptures? On Art, illusion and artificial intelligence

Art and AI have this in common: Traditionally, the more lifelike a work, the more skilled it was thought to be 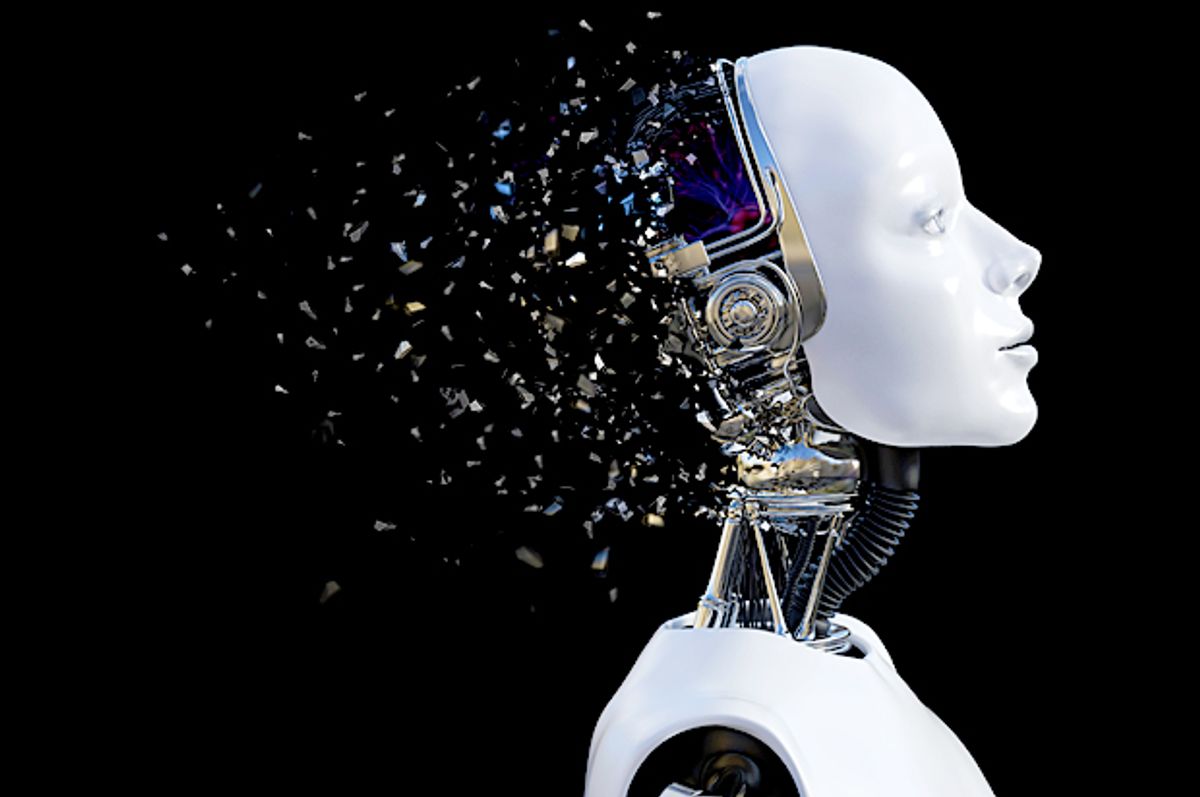 Traditional art has an element of illusionism to it. This has long been commented on, and is responsible for the prevalent thought (at least among the general public) that the more realistic the artwork, the more a man-made creation looks like a nature-made one, the better it must be. The ancient praised the lifelike naturalism of painters, with Pliny relating the famous story of a duel between two artists, one of whom was able to fool a bird into swooping in to peck at his painted grapes, whereas the other was able to fool the first artist, tricking him into trying to pull aside a curtain that was, in fact, his painting of a curtain. Fooling a human trumps fooling an animal, and the ability to inspire awe, wonder, the “how-did-they-do-that” expression, has long been the goal of most traditional art. Think of a tale of Pygmalion, in which an ivory sculpture of a naked woman was so realistic, and its sculptor’s love for it so strong, that it actually came to life.

And so it is with robots, particularly the latest generation of Artificial Intelligence, which strives for a human-like appearance, yes, but also an ability to make human-like decisions and responses. From films like "Ex Machina," "AI" and "I, Robot" to the AI that lives in our pockets and living rooms, like Siri and Amazon Echo, we want artificial intelligence to feel lifelike. But we also want to know how and why this works. If we cannot explain why, if the illusionism feels too real, it can frighten.

Perhaps the most famous of a sculpture come to life, a historical robotic AI conundrum, was a man-shaped machine called The Turk. This metal automaton was first unveiled in 1769, presented to the court of Empress Maria Theresa of Austria by one Wolfgang von Kempelen, a Hungarian inventor of, among other things, pontoon bridges, water pumps, steam turbines, a typewriter for a blind pianist, and a speaking machine that functioned like a mechanical model of the human vocal tract. This invention took 20 years to produce, and used bellows of the sort that would stoke a fire, reeds from bagpipes, the bell of a clarinet and other components to produce sounds on demand that were reminiscent of human speech sounds.

While many of von Kempelen's inventions are impressive, he is best known for his Turk, which was a full-sized manikin in the form and attire of a mustachioed Ottoman man, smoking a long pipe with one hand and seated behind a table upon which a chessboard sat. The automaton appeared to move on its own and consider its human opponents’ chess game, reacting appropriately and winning most of its matches during its existence, in constant use (it was destroyed in a fire at a Philadelphia theater, which damaged the neighboring museum in which it was stored, in 1854). The Turk was victorious against several famous opponents, including Benjamin Franklin and Napoleon Bonaparte.

Von Kempelen got the idea to build The Turk after seeing illusionist Francois Pelletier perform at Schonbrunn Palace in Austria. Von Kempelen promised to return to the palace with an illusion that would outdo Pelletier’s act. Return he did, with The Turk in tow. The automaton was designed with a stage magician’s style in mind, for viewers would logically think that there might be some human hidden inside. So when it was presented, von Kempelen would open a series of cabinet drawers to show the audience that the base of the table was empty. Doors on the left of the cabinet showed brass gears and mechanics that looked like the inside of a clock. The back doors of the left side could be opened to show the audience all the way through to the other side. The right side also included brass structures, but these could be removed. There were hidden doors beneath the manikin, and thus behind the table, showing further clock-like workings. In short, the entire base of the automaton could be shown to the audience, to assure them that there was no person hidden inside.

But this is where the magician’s sleight of hand came in. The middle of the table, beneath the chess set, did not open all the way to the far side. There was a compartment under the table that was not visible when the left and right cabinets were opened. Instead, there was a seat that could smoothly slide from side to side, where the chess master sat, rather contorted. When von Kempelen opened the left cabinet, the chess master would slide to the right. When he then closed the left cabinet to open the right, the chess master would slide left. Each time the seat slid, it automatically shifted fake gearworks into place to “fill” a cabinet that was otherwise empty when the cabinet doors were closed.

When the audience was satisfied that the base of the table contained nothing but gears, then the chess master would take his place on the right side, and use those same brass gears to manipulate the manikin’s arms and even his facial expressions. The chess master could “see” the board because each piece was magnetized, so the underside of the chess board had pieces on it that indicated where the real chess pieces sat on the board above.

As a further diversionary move, von Kempelen would place a small wooden box, in the shape of a coffin, on top of the table, adjacent to the chess board, when they game began, and would periodically look inside it, never showing the audience what it contained, but leading them to conclude that it contained some key to the functioning of the robot. Not only would the robot defeat opponents, react to them (even tsk-tsking them if they tried to cheat), it could also perform a complex chess puzzle called the “knight’s tour,” in which a player must move a knight so that it lands on every square on the board only once. To top it off, The Turk had a sort of Ouija board, through which it could “speak” to opponents and bystanders by spelling out its reply in German (though oddly not in Turkish).

In point of fact, The Turk was a hoax. Well, sort of. It was not a computer-programmed automaton, but rather a human-operated automaton. The trick was that a real (and preferably very small) human chess master was concealed inside the table component of the automaton, and would engage the chess opponents by manipulating the movements of The Turk through a system of levers. At least six known chess masters operated The Turk at some point (including a Bavarian rabbi and the very first chess Grandmaster).

Von Kempelen was not happy about his invention’s popularity, as word of it spread, books were written about it, and it was in demand across Europe. He tried to dismiss his creation as “a mere bagatelle,” and even once dismantled it to discourage invitations, while he plowed ahead on other projects. This is likely because of the logistical difficulties in procuring chess masters and the fear that showcasing it too often would lead to the unmasking of its workings. He only reassembled it on direct command of Emperor Joseph II, and he subsequently sent it on a tour of Europe.

While The Turk lost to several leading chess masters, it won almost all of its games, including the besting of Benjamin Franklin while he was American ambassador in Paris. Philip Thicknesse, Thomas Gainsborough’s dear friend, published a book on The Turk, trying to expose it as a hoax — he was almost right, in thinking that a “small child” was concealed inside it. After von Kempelen’s death, The Turk passed through various hands and was eventually sent to the United States, where Edgar Allan Poe’s personal doctor bought it.

The Turk is but one story among many of a high-profile automaton that captured the world’s imagination. It is a sculpture, and therefore a work of art, but one that had the illusion of life breathed into it, thus it was a proto-robot. Most who saw it considered it an act of illusionism, not a real automaton but some trick of the inventor’s which was deemed pleasurable to its audience. The game was to figure out how it worked, knowing that it was not actually a man-built machine that could think and act on its own.

The Turk was, of course, the precursor to Deep Blue, the computer chess program that actually is programmed to think for itself, without the need for the showmanship of the mechanical manikin. Immersion in the liveliness of The Turk made it feel not like an artwork, not a metal statue, but something new, a magician’s prop or clockwork mechanism. But of course it was both, art and artificial intelligence.

As is all AI, whether or not its creators feel the need to place it into a naturalistic shape, like a metal Ottoman. Today’s AI inhabits the realm of minimalist or abstract art, with Amazon Echo as a sort of Brancusian monolith. There’s even a new robot you can have sex with, meant not just as an object of lust-satisfaction, but also a companion. It’s the ancient story of Pygmalion, the sculptor who falls in love with his work, Galatea, only for it to come to life. AI is art: man-made approximations of nature, whatever the look of their skin.