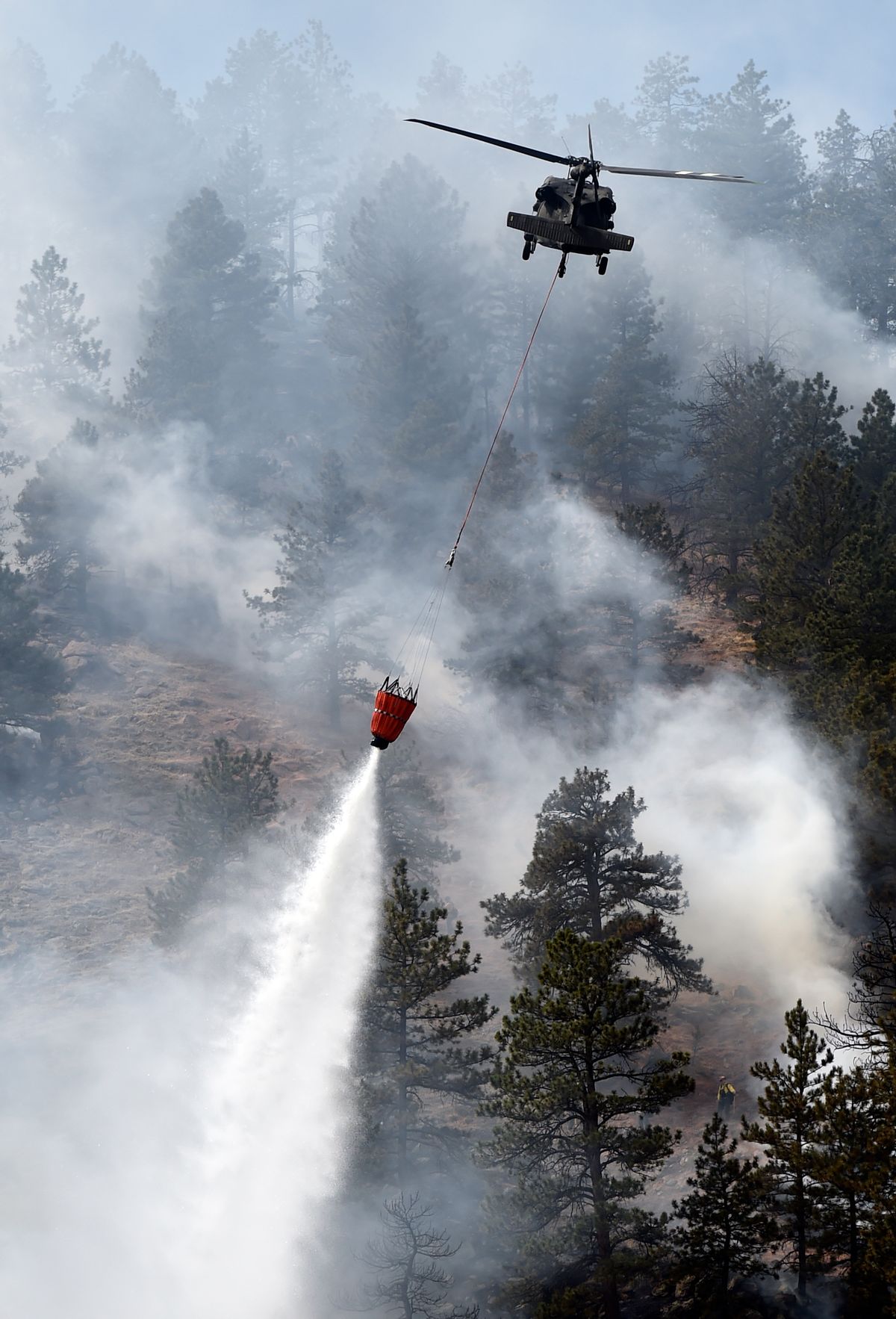 A helicopter drops water on the fire as crews battle the Sunshine Fire in the Sunshine canyon area of Boulder, Colo. on Sunday, March 19, 2017. (Jeremy Papasso/Daily Camera via AP) (AP)
--

It’s feeling a little apocalypse-y in the Pacific Northwest this week.

With excessive heat warnings and temperatures reaching the triple digits from northern California through Washington state (places where air conditioning is far from a given), it’s a bit hard to fathom that this week should have been even hotter.

All-time records could have been set up and down the coast, if it hadn’t been for the thick smoke streaming down from more than 100 massive forest fires in British Columbia, about 500 miles north.

You heard that right — the smoke in places like Portland, Seattle, and Vancouverwas so thick it changed the weather. At Seattle-Tacoma International Airport, smoke even kept flights from taking off. (From the air, you couldn’t even see the ground.) In Seattle on Thursday, the air quality was worse than in Beijing.

This interplay between fire and hot weather has inspired a bleak and eerie feeling for people in this part of the country. As climate scientist Sarah Myhre writes for Seattle’s alternative newspaper, the visceral experience of climate change in the future might feel a lot like it does this week in the Emerald City.

Hot temperatures increase evaporation rates and dry out the soil, resulting in even hotter temperatures. Drier weather makes wildfire more likely, and wildfires in a hot and dry environment can spark pyrocumulus clouds — freak thunderstorms borne literally of the heat of the fires themselves, whose lightning can spark new fires. (This actually happened in northern California on Wednesday.)

It’s no wonder it feels like a sneak peak at the end of the world.

It’s normally fairly dry this time of year from Sacramento to Juneau, but the last six weeks have been exceptional. This summer’s wildfires in British Columbia are the worst in more than half a century. If it doesn’t rain this weekend — and it’s not forecast to — Seattle will set a new a new all-time record for consecutive days without measurable rainfall.

In a normal year, Seattle reaches 90 degrees only three times. In this week’s heatwave alone, Seattle may reach that mark seven days in a row. In parts of southern Oregon, temps rose above 110 degrees this week even despite the smoke. And the latest forecast shows that the smoke might stick around for at least another week.

Overnight lows, in particular, were record warm this week — a classic signal of global warming. The changing atmosphere is effectively becoming a thicker blanket, preventing heat from escaping into space at night, making overnight temperatures warm even faster than daytime highs. That’s a worrying trend for public health.

At 1 a.m. on Thursday morning in Seattle, the temperature was still 77 degrees, equivalent to the average high for this time of the year. Without the smoke, the high on Thursday would likely have breached 100 for just the fourth time since weather records began in Seattle, back in 1894.

As the New York Times points out, only about one-third of Seattle’s homes have air conditioning. The inability to cool down is a public health hazard in extended heatwaves like this; studies of hyperthermia consistently show that it’s the lack of overnight recovery time that can become deadly.

A new study out this week projected that, should global carbon emissions continue unchecked, more than 500 million people in South Asia alone could be subjected to heatwaves so intense by the end of this century that they could kill even healthy people that happened to venture outdoors.

That’s exactly what scientists mean when they say climate change could render parts of our planet uninhabitable. This week’s weather, as mild as it is in comparison, is yet another warning sign.