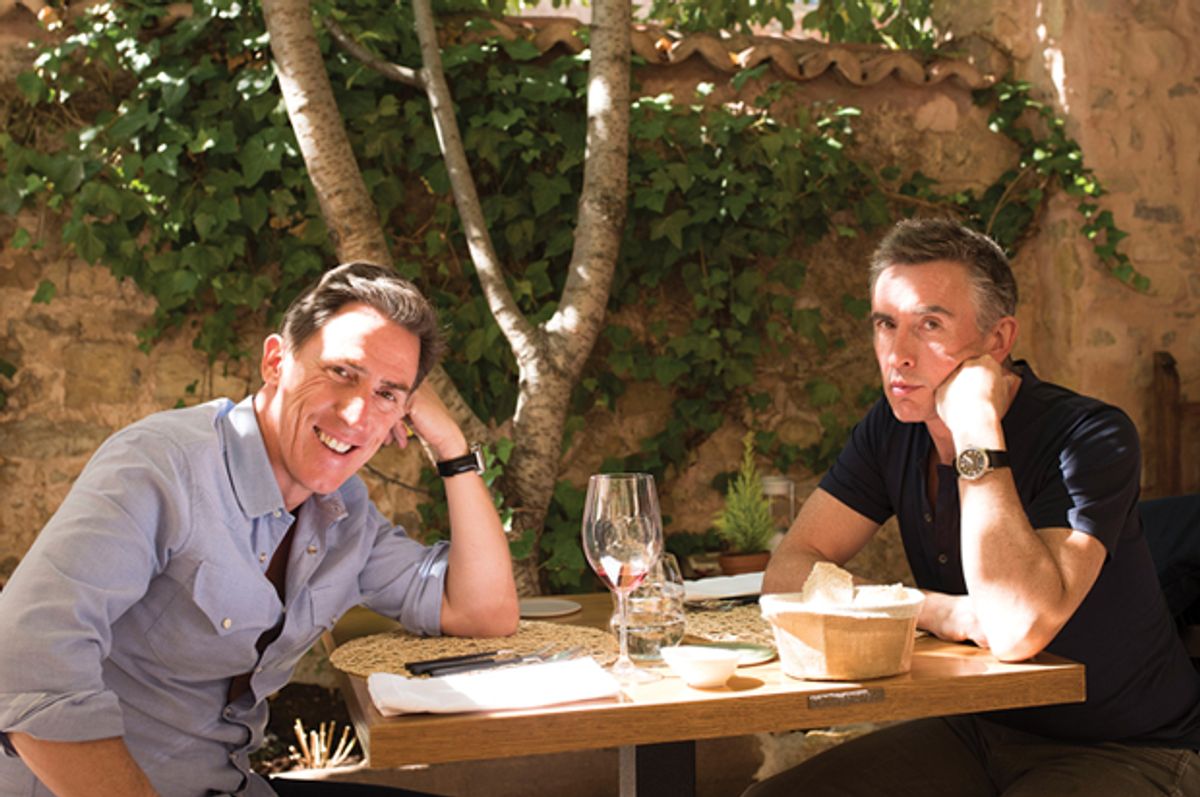 Replace the serious, humane leads of "My Dinner with Andre" with two droll British actors hamming it up as they travel through the gorgeous European countryside between exquisite meals, and you'd be getting close to "The Trip" series, which is releasing its third installment in theaters this week.

"The Trip to Spain," again starring old chums Steve Coogan ("24-Hour Party People," "Phliomena") and Rob Brydon (a lot of British TV shows you haven’t seen, "The Huntsman: Winter’s War"), follows 2010’s "The Trip," in which they bumbled through England's wooly North, and 2012's "The Trip to Italy," in which they sniped their way down Lo Stivale.

"The Trip to Spain" features many now-signature "Trip" gags, including impersonations of Michael Caine and various James Bonds, which may feel tired to some but still hilarious to the actors' loyal followers. The chaps cross swords as they impersonate Mick Jagger (doing Shakespeare) and do some epic spins on Spanish sacred cows such as the Inquisition and Cervantes, with Coogan as Don Quixote and Brydon as Sancho Panza. (Alas, there are no references to Almodovar.)

What rises above the romping is the underlying story of friendship between two middle-aged men, one married with kids and the other decidedly not, wrestling with being on the wrong side of 50.

Salon spoke with Michael Winterbottom ("The Claim," "24-Hour Party People," "The Road to Guantanamo"), the director of all three “Trip” installments, about being the third wheel on this well-oiled vehicle.

Each trip seems quite natural and, within the parameters of the films, authentic. How do you put them together?

We decide which country to go to and I go on trips there and do research over six months. And then I have six lunches back in London with Rob and Steve and we chat about things. And then I write a 60-page outline. And during filming, they just improvise.

So you don’t write any of the dialogue?

Over those lunches, we might discuss things that they might want to talk about, but it's more areas. They tend to find it frustrating if I write them dialogue, which happened more for the first one. And we’ll sometimes find that what was funny six months earlier at that lunch isn’t funny anymore.

Do Rob and Steve actually spend time together outside of these "Trip" films?

Not very much, really. Once they’ve spent a month together on the road, I think they like to take a break.

How real are these trips? What are we supposed to believe?

But this isn't standard fiction. These personas that Steve and Rob are playing are extensions of their actual selves, right?

How close are the character to the real Steve and Rob? They would say they are fictionalized characters. I'd say they are comic exaggerations of who they are: Steve as being ambitious and wanting to change the world and Rob as being happy to be home and to just to make people laugh and be easy. And that's what makes it possible for them to be spontaneous while shooting. It's what a lot of comedians do when they do standup. It's a comic persona that's a version of themselves. But it's an exaggeration.

Such as: Is Steve really so insufferably proud of his Oscar nominations for "Philomena"?

That’s a perfect example of the exaggeration of the truth. Quite right he should be proud of it, and quite right that Rob should be poking fun at him for it.

You have a truly WTF ending to the film. Let's not give anything away but how responsible do you feel to maintaining the façade that this is nonfiction?

For me, the ending is you can take it any way you want to. The reason I wanted go and end it that way is one of the aspects of Steve's character, and what Rob pokes fun about is that Steve thinks he wants to be this man of adventure who takes risks like George Orwell or Cervantes. Steve imagines himself as wanting these adventures but there’s the gap between what Steve wants to be and, "Oh shit!," him realizing he doesn't want to have that.

Where’s the next trip going to take you?

I don’t know. Three may be enough. Hopefully. Or maybe somewhere darker, like Scandinavia or the Arctic, where we can just leave Steve and Rob forever.