Older women, including their aunts and mothers, discouraged shoplifters from taking items from the grocery stores 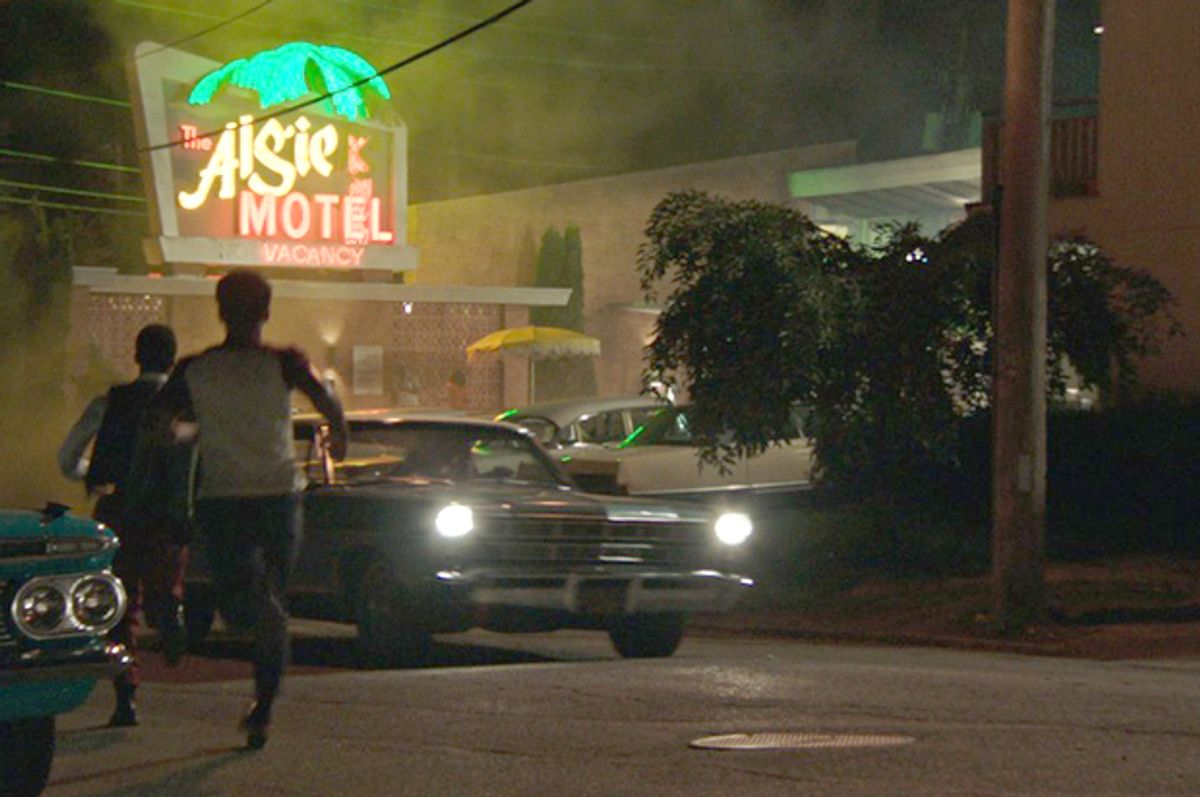 The movie “Detroit,” which tells the story of the 1967 Detroit rebellion, has received mixed reviews since its release. Some praised the film for tackling a complex, little-known story, while others criticized it for its representation of the the city, the historical events and actors involved. In many respects, the film is limited, with the voices and perspectives of women and girls lacking.

I moved to Michigan in the fall of 2013 to begin teaching theater for social change and performance studies at Michigan State University. As a Chicago native, I knew little about the history of Michigan and Detroit.

I began researching the 1967 Detroit rebellion to answer my own questions about what had happened. When I began to review the wealth of materials found in oral history collections and newspaper archives, I was struck by the lack of any sort of perspectives from the women and girls who witnessed and participated in the uprising.

In photo after photo, women and girls appear alongside men and boys. Of the over 7,000 people arrested from July 23 to July 28, 1967, between 10 and 12 percent were women or girls. (The youngest was 10 years old.) Forty-three people were killed, including two white women and one little girl, Tanya Lynn Blanding, shot and killed by the National Guardsmen who opened fire on her building.

Who were these women and these girls? What were they doing on the street? What roles and responsibilities did they take during and after the military occupation, and later, when industry and investments fled the city?

Those questions inspired me to develop a new play called “AFTER/LIFE,” which focuses on the experiences of women and girls in Detroit before, during and after the rebellion.

Rather than beginning that story with the raid on the unlicensed after-hours club on July 23, 1967 — as the film does — I decided to focus on the activism that emerged following the police murder of Cynthia Scott in Detroit four years earlier. Long before 1967, the issue of police brutality was at the forefront of Detroiters’ minds, with women and girls going on to play prominent and important roles in the rebellion and its aftermath.

The history of police brutality in Detroit is long and complex, but at no time have men or boys been the exclusive targets of their violence. In the early morning hours of July 5, 1963, police stopped Cynthia Scott and a male companion as they walked down John R Street near Edmond Place.

Scott was a young, African-American woman with a history of engaging in sex work to survive. According to several witnesses who spoke to the Detroit Free Press, despite Scott’s repeated assertions that she was with her boyfriend and that they had the right to walk down the street, Detroit police moved to arrest Scott on suspicion of prostitution. She broke away and officer Theodore Spicher shot her three times. She fell face down on the pavement dead.

Witnesses contested Spicher’s official statement that she had pulled a knife on him before he shot her. Local activists took up the case as a rallying cry. The Illustrated News, a grassroots circular published by civil rights leaders, carried a two-page story accompanied by detailed pictures of community members picketing the police headquarters.

On the front lines

Segregation in 1967 Detroit meant there were few opportunities for blacks to live, work or socialize freely. Racist public policies called for the overpolicing and underprotection of Detroit’s black communities. Underground bars called “blind pigs” filled a vital need for safe places for adults to relax, mingle and exchange ideas.

In the scorching hot, early morning hours of Sunday, July 23, 1967, Detroit police raided the “blind pig” run by William Walter “Bill” Scott II at 9125 12th Street. As the police slowly loaded the 80-odd partygoers into paddy wagons, neighbors gathered on the street to watch. A rumor circulated through the crowd that the police had manhandled at least one woman. For Scott’s 19-year-old son, William Walter Scott III, a lifetime of frustration over police misconduct fueled the first bottle he threw. The chaos spilled into the street, the police pulled back and looters broke into local stores. The disturbance would escalate as the crowds — and the response by law enforcement — would turn increasingly violent and deadly over the next several days.

In 1967, women worked in many of the businesses that were impacted by shoplifting and arson. Some of the women I spoke with — who were girls at the time – recalled that older women, including their aunts and mothers, discouraged shoplifters from taking items from the grocery stores and dry cleaners where they worked on 12th Street.

I learned from interview subjects that in other instances — recognizing that the food and goods would rot or be destroyed — women encouraged people to take what they could carry for themselves and their families. Many understood that 12th Street, one of the most vibrant corridors for black businesses, was being destroyed, and that it would take some time for these much-needed jobs and services to return, if they ever would.

Despite the fires and rampaging police and National Guardsmen, black women took to the streets and put their lives on the line. For some, this meant taking food and other items they needed for friends and family; for others it meant personally ensuring family members made it out alive.

During performances of “AFTER/LIFE,” patrons were asked to share their memories. One man recalled that his mother piled her children into a car to evacuate them out of the city. Another woman told us that her mother faced down a National Guardsmen’s rifle and bayonet to get her children home. Teaching their children to load weapons, to hit the floor and duck for cover to avoid getting shot by the police, and to be forever wary of men in uniform — all of these things became a necessary part of mothering during the rebellion.

As police and National Guardsmen escalated their attacks on black Detroiters and local businesses came under fire, black women also worked to deescalate the violence. Oral histories and archival materials reveal that they carried sandwiches and lemonade to guardsmen and police who were deployed without provisions in their communities. Most importantly, women activated longstanding community organizing networks to provide food, water and shelter to those Detroiters who had been displaced by the violence. Women in positions of influence, from Grace Episcopal and New Bethel Baptist churches to the Temple Beth El synagogue, rallied together.

This vital, “behind-the-scenes” work would have been impossible without a concerted effort on the airwaves. Martha Jean “The Queen” Steinberg, a prominent black radio host, convinced her station managers at WCLB-AM1400 to interrupt their regular programming and allow her to go on air. For the next 48 hours, she would urge calm while giving her majority-black listeners the latest updates, including how local, state and national leaders were responding to the crisis and where they might get help.

Some of the hardest tasks fell to women such as Margaret Gill, Rebecca Pollard and Viola Temple, the mothers of the teenage boys killed by police at the Algiers Hotel. Along with June Blanding, whose four-year-old daughter, Tanya, was murdered by National Guardsmen while she slept, these women organized immediate aid for the victims and led the longer-term charge for justice.

Women also played key roles in a “People’s Tribunal,” which was organized to hold the police and National Guard accountable. On August 30, 1967 at the Central United Church of Christ (later the Shrine of the Black Madonna), Rosa Parks, a veteran of civil rights organizing, sat as the lead juror in the mock trial that drew hundreds of spectators and ultimately found the police guilty of murder. While the tribunal would have no impact on the formal, criminal proceedings, it provided a necessary and important space for the community to tell the truth, express its anger and frustration, and receive a measure of social justice.

Fifty years later, Detroiters are engaged in a large-scale act of commemorating the 1967 Rebellion. Art and history museum exhibits, panel discussions, book releases and performances have been staged across the city by grassroots organizations and cultural institutions. Men continue to figure prominently in the coverage.

Curators at the Detroit Historical Museum acknowledged as much when they posted a sign in their exhibit that asked patrons, “What’s missing?”

Their answer: the perspectives of people of color and women. As long as our stories about the 1967 Detroit Rebellion overlook the knowledge and experiences of women and girls, they will continue to circulate half-truths and false representations of the city, the causes of the uprising and the world Detroiters inhabit today.