Want to understand white privilege? Look at college golf teams like mine 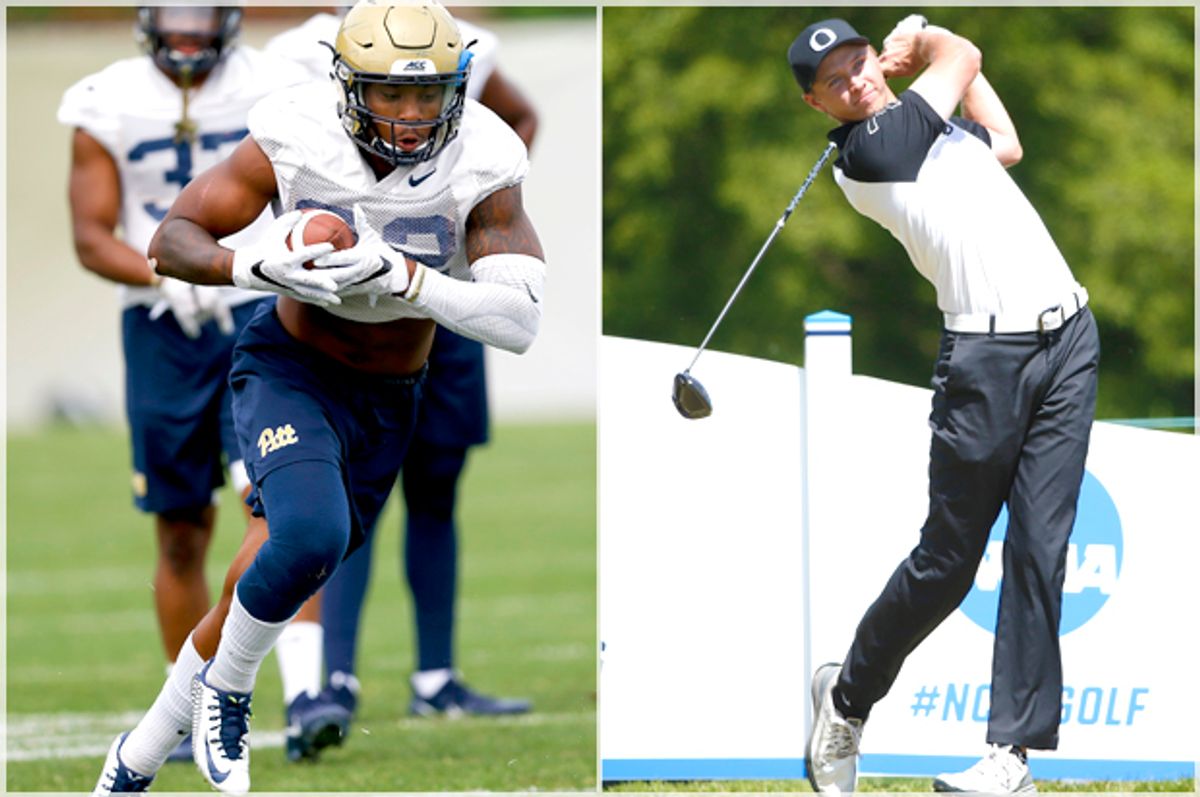 More and more discussion has become centered around what white privilege is. But very little dialogue has taken place around white privilege in college sports and the labor of African-American athletes on the football and basketball teams who make it possible for other sports to exist at universities.

So, as college football season begins in a couple weeks, I reflected back on my time at the University of Washington while playing on the women’s golf team.

For a good 20 years of my life, I was a competitive golfer. I played on a full athletic scholarship and eventually turned pro, playing a short while on the LPGA and developmental tours.

While it is no secret golf is made up of a majority of white men, I never fully recognized the privilege I had to play on a golf scholarship, and this realization came to me after reading a Facebook post from another white woman who I used to play on tour with: “If college is free for everyone, then it will be equivalent to a high school degree,” she lamented.

My first reaction was, “But you went to school for free on an athletic scholarship . . . also, your parents are millionaires.”

Then I wondered, “How do golf programs exist at universities?”

As one can imagine, when a basketball or football team wins a Bowl game or makes it into the Final Four, the financial stakes are considerably higher — not just for the schools, but for the NCAA itself.

So it should surprise no one that during March Madness in 2016, the NCAA raked in close to $1 billion in three weeks from ad revenue, ticket sales, corporate sponsorships and media rights.

While it is no secret that the basketball and football programs at universities can make a ton of money for schools, there are also plenty of athletic programs that cost the universities and colleges money. Golf happens to be one of those programs.

This was just the cost of me as a student, not as an athlete.

I called my coach, Mary Mulflur, and asked, “How much did I cost the university to play on the team per year?”

The cost of playing on the women’s golf team included my equipment, travel to tournaments, physical therapy and insurance on me. In total, my time at the university cost the school around $424,000.

When I asked how the school could afford to have a golf program, without hesitation she responded, “Well, the football and basketball program, of course.”

Knowing this I quickly realized that in essence I was the freeloader that America loathes, the one we hear about so often in elections, one of those who takes advantage of a system set up to make people feel entitled.

In particular, other university sports like tennis, golf, swimming and gymnastics (mostly made up of white athletes) ride off the backs of mostly African-American athletes. According to a study conducted by University of Pennsylvania researcher Shaun R. Harper, black men only make up 2.5 percent of undergraduate students, but comprise 56 percent of college football teams and 61 percent of college basketball teams.

While it’s not completely fair to paint all golfers with a broad stroke, I would be remiss to say that in the confines of our perfectly manicured golf courses it becomes easy to forget that 43 million Americans live in poverty and it becomes easier to turn a blind eye to our privilege.

Many people are surprised to learn that several LPGA players support Donald Trump. And why do they support him? Because he has supported the LPGA throughout the years. Their support for him was rooted in the fact that he couldn’t possibly be that bad of a guy if he supported the LPGA tour (never mind the fact that he benefitted from from supporting the tour). It is also a blind spot on their part to think that Trump’s support of the LPGA equates to support of women, as we can see with programs he has overturned or dismantled so far.

LPGA professional Natalie Gulbis gave a glowing speech about Trump at the Republican National Convention, stating, "I believe this is the greatest time to be a woman in the greatest country in the history of the world, but I have no delusions that there isn't a mess to clean up. And we desperately need someone to clean up that mess. That person is Donald Trump."

A few months later, Gulbis penned a piece for espnW about what it was like to support Donald Trump. The essay was written after he signed the executive order banning refugees and immigrants from seven Muslim majority countries.

“And while Donald's aggressive stand on immigration has been controversial, the LPGA is a very international tour, and LPGA officials say there have been no visa issues so far,” she wrote.

Well, of course there haven’t been any issues, because there are no players on the tour from the banned countries.

Talk about a real disconnect.

Another issue that presents itself is that entitlement is embedded in golf.

As I have further separated myself from the world of golf, focusing on writing about the sport rather than playing, I have a better sense of awareness of the privilege afforded to me to play a sport that is inaccessible to most.

Growing up, I was often the only girl at the golf course when practicing, and to my memory, I only met two black junior golfers in my area, both of whom were from the same family. While this should have stood out to me, as an adolescent my mind hyper-focused on being the best golfer, not on societal issues.

(Since the LPGA tour's beginning in 1950, it has had only eight African-American golfers join the tour. The PGA tour has only had seven African-Americans participate since its founding in 1929.)

Upon entering high school, though, I began to see more clearly the divide still engrained in the sport. My high school golf team was filled with girls who came from upper-middle class families. Of the 10 girls on the team, none were minorities, except me, although I did not fully identify as Mexican.

I have a vivid memory of one girl’s father who flew his private plane to pick her up from an event when she decided she didn’t want to be in Ardmore, Oklahoma. I roomed with her when she made that phone call to her father to pick her up, and the thought that came to mind was, “You’re sitting here crying about not liking this town, but we get to play golf! Like how cool is it that we get to skip school to play golf, paid for by our school?”

During this time my mother was cleaning houses as a way to support me and my sister. She started cleaning houses because of the flexibility it provided. After scrubbing toilets (and inevitably, the toilets that belonged to the family of one of my golf teammates), she would take me to the golf course and sit in the snack bar for upwards of five hours, watching me through the window as I chased my dreams.

While there were certainly families that also made sacrifices to give their child the opportunity to play golf competitively, they were very few and far between. I wore cheap clothes from Walmart, and my mother drove a beat up 10-year-old Toyota Corolla, which left me feeling like an outsider.

The sacrifices my mother made so I could earn an athletic scholarship have left me feeling eternally grateful. However, while I loved college golf, there is a sense of guilt that I have zero debt from college for playing a sport that in all honesty does little to nothing promote a university. A good golf program only matters to the golfer playing on the team, and it is only because of the labor of mostly African-American athletes that we are able to play.

As my political and societal views have begun to evolve over time, the privilege and past discriminatory practices embedded in golf have weighed heavily on me. In particular, I notice how it has shaped the views of my golfing companions who have lived in a world of privilege.

I don’t consider myself fully “woke,” as people say these days. Moments come and go where I surprise myself for thinking a particular thought, and I can’t help but wonder if my time spent in such an elite world contributed to my ignorance.

Perhaps my views were shaped by wanting to feel like I belonged, and belonging meant ignoring that the golf community, which is mostly still white and male, does little voluntarily to make the sport more inclusive and accessible.

One thing is clear though: Golf is a perfect example of the world we live in terms of the haves and have nots. But whether through golf or through something else, my hope is that one day everyone will have access to the same indulgence of happiness and opportunity.