Yes, "dog anti-vaxxers" is a thing. In Brooklyn. But they might not be as crazy as you think

Your pooch won't get autism from the rabies shot. But there are legitimate concerns about over-vaccinating pets 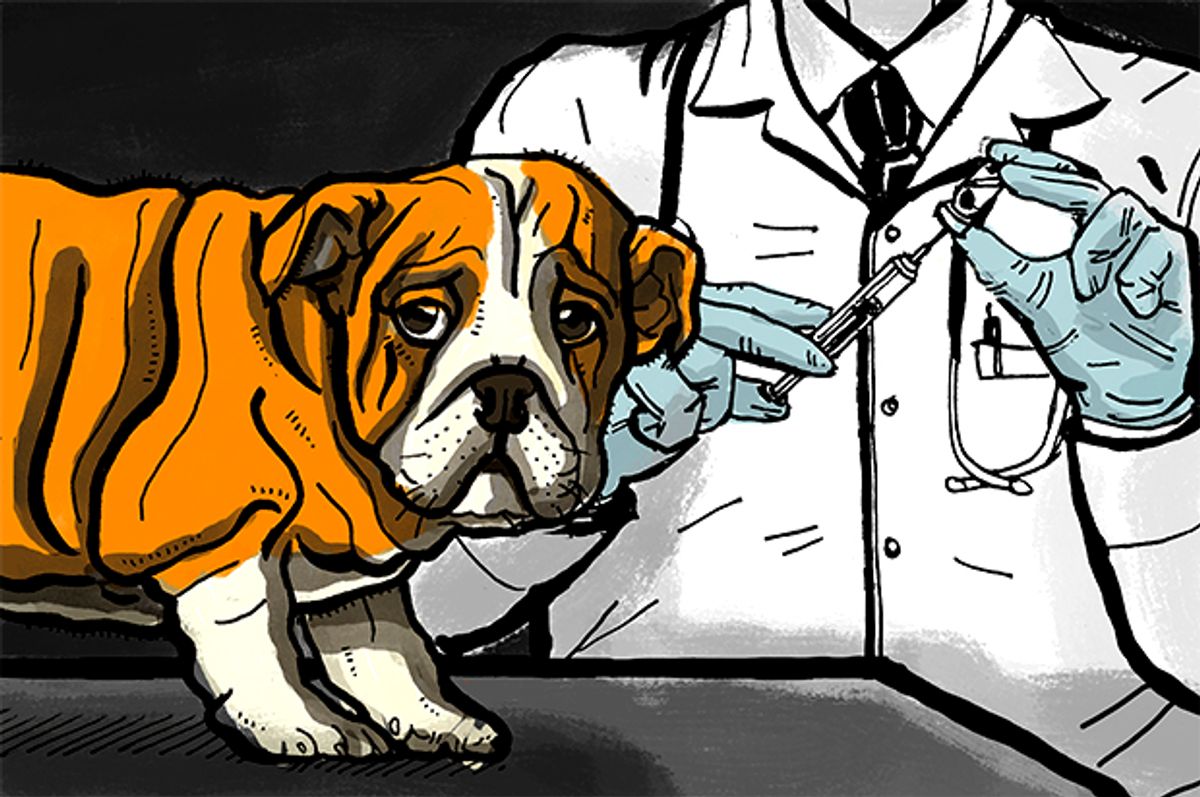 A story appeared in New York’s Brooklyn Paper last week claiming that “hipster-y” pet owners are withholding vaccinations from their animals due to fears of autism.

The story set off a flurry of incredulous pieces about how the anti-vaccination movement has jumped across the species barrier, and how this trend could put dogs and cats in danger of contracting lethal diseases.

To a point, I agree. I am not an anti-vaxxer — and not wanting to vaccinate your dog at all because you’re afraid it might become autistic is pretty terrible reasoning.

But if we take hipster Brooklynites out of the equation here, these stories are obscuring a real problem.

When it comes to pets, it’s not vaccinations, per se, that are the problem. It is over-vaccination. None of the stories I read following the outbreak of incredulity mentioned this.

Many highly experienced veterinarians are now warning that vaccinating our pets for the same diseases every single year is unnecessary and can actually lead to health problems.

Those recommendations are “completely arbitrary,” according to Dr. Richard Ford, a professor of medicine at North Carolina State University. Ford was part of a task force set up by the American Animal Hospital Association that evaluated data from studies that showed that the core vaccines had a minimum duration of immunity of at least seven years. Not one, not three, but seven. Some vets even believe one shot of certain vaccines can produce disease immunity for an animal's lifetime.

So where did we get the idea that we should be vaccinating dogs and cats every year of their lives?

Studies to assess duration of immunity are expensive, so vaccine manufacturers decided the best thing to do would be to suggest annual vaccinations on their labels. That was easier and less expensive. Plus, the more we vaccinate, the more money they make. For the most part, vets seem to adhere to these protocols, despite the fact that they are not based on science. I’m not coming down on all vets here, but the truth is, the more we all vaccinate our pets, the more money they make, too.

But it’s not just that we’re vaccinating animals too often. When it comes to dogs in particular, there’s another issue: dosages and adverse reactions.

A Chihuahua receives the same vaccine dosage as a Great Dane. There are conflicting opinions on this in veterinary medicine. Some experts believe that the size of the animal is irrelevant, while other studies suggest that smaller dogs could be at greater risk of adverse reactions to vaccines than larger dogs. For the most part, vets administer the same dosage regardless of size. In some cases, the law precludes them from doing anything else.

A vet in Connecticut, Dr. John Robb, recently received veterinary licensure probation because he reduced dosages of the rabies vaccine for small dogs. He was accused of endangering the lives of pets due to under-vaccination. Here he is pleading with the state board of Connecticut for a change in the laws regarding rabies vaccines.

Robb presented officials with 45 documents suggesting that vaccines are dose-dependent, that too large a dose can be fatal and that booster vaccines are often unnecessary and provide no additional protection to an animal. But Robb has now been forbidden from vaccinating another animal for rabies for 25 years and must work under the supervision of an approved colleague for 18 months.

Robb is not an anti-vaxxer and to the best of my knowledge he’s not a Brooklyn hipster either. He believes in vaccinating against rabies, distemper and parvo -- and dosing according to weight to produce a protective antibody in the dog.

The worst thing about all this is that there is a potential way around this problem — though there is controversy here, too. Many vets advocate a blood test, known as a "titer" test, to assess whether or not your pet has immunity to a certain disease.

For example, if your dog had its core puppy vaccinations last year, you could run a titer test instead of blindly giving another vaccine. If your dog has maintained its immunity since its last vaccine, then it doesn’t need another shot. The problem is that laws vary widely and sometimes a vet will be required to comply with the law and administer a new vaccine anyway, regardless of what the titer says. Furthermore, some vets doubt the reliability of titer tests.

Rabies researchers at Kansas State University are trying to remove uncertainty behind titer tests by developing standards that specify which antibody titers are protective against rabies.

If it turns out that a simple blood test could indeed prove that an animal is immune to a certain disease and does not need another vaccine, where is the sense in pumping more into them when we know it is potentially dangerous to do so? Just because your dog didn’t react to its first vaccine, doesn’t mean they won’t to the second — or third, or fourth. Again, it’s over-vaccinating that is potentially the biggest problem.

Dr. Margo Roman, a California-licensed veterinarian, saw her own dog die following its second rabies vaccination at 17 months old. The poodle went into liver failure and developed facial myositis, losing all the muscles in her head, her eyes shrinking into their sockets until she died.

At the time of vaccination, Roman had run a titer test out of curiosity, just to check the dog’s level of immunity before the second vaccine. She said that test came back showing that the dog already had 10 times more protection than it needed for a rabies response — but it was too late by then.

“My dog's antibodies were protecting her from the deadly disease of rabies," Roman said. "Giving her another vaccine did not make her more protected but instead drove her body into an auto-immune reaction attacking her own body.”

Informing the public about horrible outcomes like this is not a scare tactic. No one is saying this will happen to your puppy when you take it for its first vaccination. The rabies vaccine is probably the most important vaccine you could get for your dog. It is the only one that is monitored and required by law in most places. Reactions like the one Roman’s dog suffered are rare, but they happen — and the more we over-vaccinate, the more likely they are to happen.

Vaccines stimulate an immune system response in pets. Problems occur when the immune system goes into overdrive. Some vets believe that over-stimulation can later lead to inflammatory bowel disease, arthritis, diabetes, dermatitis and even cancers. Which brings us to another issue: combination shots. We give animals vaccines for multiple deadly diseases in one needle prick.

“The number of pathogens plus toxic and carcinogenic chemicals that the animals are exposed to all at once generate an enormous toll on the immune system," wrote Catherine J.M. Diodati, author of a book on animal vaccines, in a recent online article. "The results can be devastating.”

What’s more, if your dog reacts to one of the antigens in the combination shot, there is no way to determine which one it was — so you won’t know which one to avoid in the future.

There’s no need to go totally anti-vaxxer on your pets. Vaccinations save lives. They have all but eradicated certain diseases in many areas. Vets who warn about over-vaccination are not anti-vaxxers. They are anti-over-vaccination.

Some dogs are more susceptible to adverse reactions than others. If you’re worried, ask your vet about titer testing. Ask where he or she stands on administering smaller doses for smaller animals. There should be room for debate here. If they look at you like you’re some crazy anti-vax hipster, maybe it’s time to find a new vet.

The reaction to the Brooklyn Paper story has been disappointing. It was a missed opportunity to examine a bigger issue. Ridiculing vets and pet owners who actually have some science on their side makes no sense. A few Brooklynites refusing to ever vaccinate their pets due to ludicrous worries about "dog autism" are the minority. Lumping them into a group with pet owners and vets who are worrying for the right reasons is unhelpful.

An NBC report looked into all of this in 2005: the arbitrary recommendations, the research suggesting that immunity lasts much longer than we’re told, the option of titer testing instead of re-vaccinating. It’s about time we take another look.

Think about it: We don’t go to the doctor to receive booster vaccines for the same diseases every year of our lives. Why do we think our pets need to?