Despite Trump's unpopularity, Democrats face long road back into power

There are a handful of hopeful signs for 2018, but the GOP's grip is deep and vast 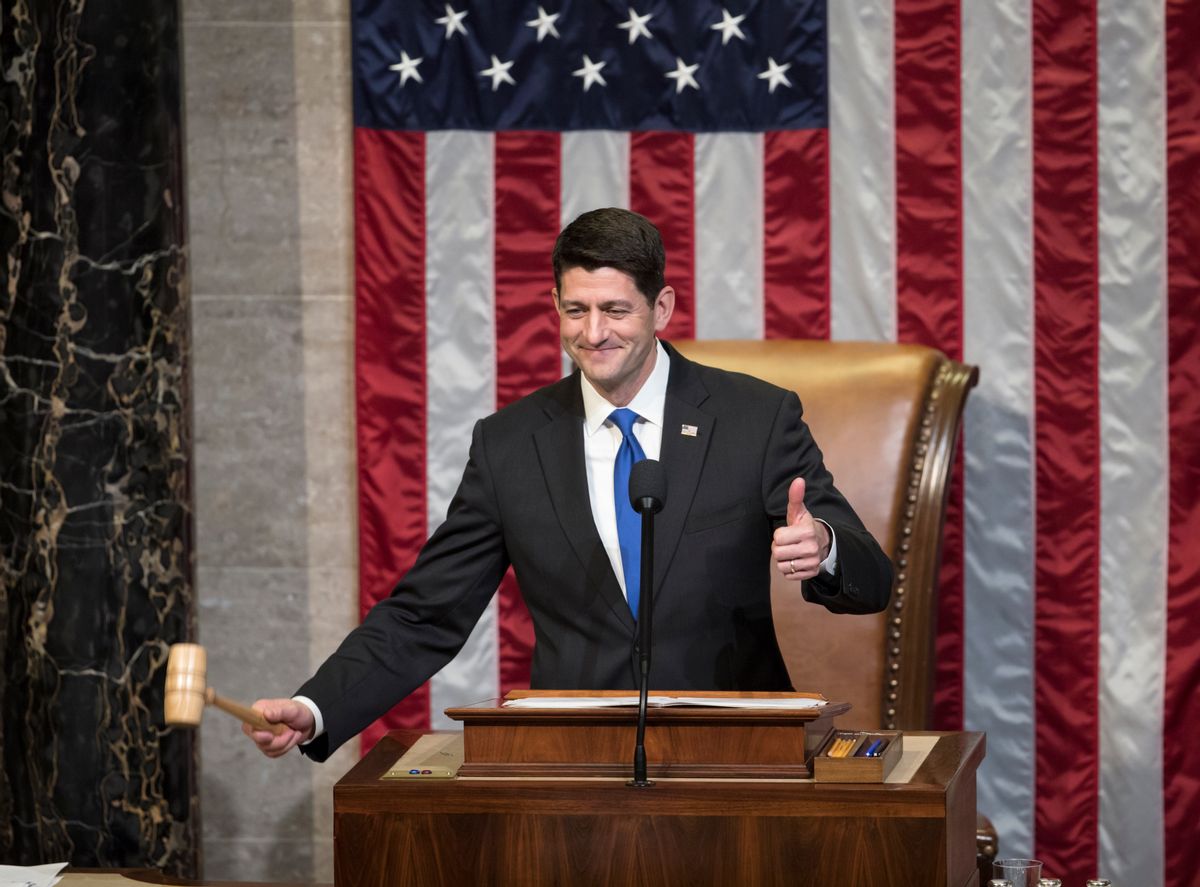 House Speaker Paul Ryan of Wis. gavels in the members of the House of Representatives after administering the oath as the 115th Congress convenes on Capitol Hill in Washington, Tuesday, Jan. 3, 2017. (AP Photo/J. Scott Applewhite)
--

The political forecasting industry has turned into a seesaw over the Democrats’ future.

Nate Silver says Trump’s base has maxed out, lifting blue hopes. The Cook Report’s congressional editor David Wasserman counters that the GOP has locks on states, the House and Senate, deflating the prognosis. The Washington Post says not so fast, citing polls finding that Democrats are not losing any ground by embracing the Bernie Sanders and Elizabeth Warren wing, offering progressives new hope.

The forecasters and their data are not contradicting each other. They have different points of departure, big picture frames, fine-print arguments and historic contexts. But what is clear is that Democrats are in a very deep ditch, and while there are some signs of hope, their pathway back into national power is anything but assured.

The good news is pegged to the politics of the moment. As Silver observes, “Trump’s problem is that there aren’t many voters who could plausibly be persuaded to join the Trump train, at least not on short notice.” And no wonder! Beyond being endlessly offensive to blue America, he and Congress’ Republicans don’t know how to lead, coordinate and execute. Hence 58 percent of the country disapproves.

“It’s not like Republicans have begun impeachment proceedings or Sean Hannity has abandoned Trump,” Silver concludes. “But in his time as president so far, Trump has found more ways to lose supporters than to gain them.”

Silver’s pragmatism suggests Democrats have an opening. Indeed they do. The latest national poll by Quinnipiac University found, “if the 2018 Congressional elections were held today, voters say 52 - 38 percent, including 48 - 37 percent among independent voters, they would like the Democrats to win control of the U.S. House of Representatives.”

Indeed, a majority also wanted a Democratic Senate. “Voters say 53 - 39 percent, including 49 - 40 percent among independent voters, they would like to see the Democrats win control of the U.S. Senate,” Quinnipiac reported, saying the public believes that Democrats can do a better job on health care, concerns raised by the working class, and equal numbers believe each party can do a better job on taxes.

What’s the problem, then? These figures might reflect the nation’s voters as a whole, but they do not reflect the blue-red breakdowns among voters in state and federal electoral districts across the country. How steep a climb it is to actually win power is not conveyed in the latest emails and fundraising blasts from blue political committees aimed at party loyalists—such as the Democratic Legislative Campaign Committee (state races) or Democratic Governor’s Association (which just launched UnrigTheMap.com).

How steep is the climb? Well, depending where you look — state legislative majorities, governors, control of the U.S. House and Senate—it sadly spans from bad to worse.

When it comes to statehouses, 32 of the 50 states have trifectas, where one party controls both state legislative chambers and the governor’s office. This is why it accurately feels like Americans live in two separate countries — because, politically, we do. Twenty-six of these monopoly states are red. (West Virginia’s governor left the Dems last week.) Six — Rhode Island, Hawaii, Connecticut, Delaware, Oregon and California — are blue.

These red-state legislators are the tribe who created the political maps in 2011 giving the GOP its lock on statehouses and the U.S. House for this decade, as well as launched the lawsuits challenging Obamacare, climate change, abortion rights, LGBT equality, etc. They are not going away. Instead, they define 2018’s and 2020’s political landscape.

“Democrats, who at the beginning of the Obama presidency held 28 governorships, have seen their ranks dwindle to just 15,” wrote the Washington Post’s Dan Balz after Justice flipped. “At some point over the past decade, according to the Republican Governors Association, there has been a Republican governor in 46 of the 50 states,” he said. “Eight years ago, Democrats held the upper hand, controlling 17 states to nine for the Republicans.” That loss of seats means no one vetoes bad right-wing bills.

When it comes to Congress, the task is more than daunting. Why? Because those extreme gerrymandered maps, created by GOP monopoly legislatures in 2011, erased competitive districts and gave the GOP roughly 20 seats more than fair-minded contests would have yielded. That’s according to new analyses — from the Associated Press (22 more seats) to the Brennan Center for Justice at NYU School of Law (16-17 seats).

As redistricting expert David Daley recently told AlterNet about 2018, “I see a really tight map. Democrats need to take back 24 seats and my challenge to people who say the Democrats can take back the House is, name those districts. And you better name more than just 24 because you're not going to win all of them. Where are the 60 districts that can be targeted, in order to have a fighting chance of taking back half of them?”

What people need to understand about redistricting is GOP mapmakers segregated each party’s reliable voters. As the Supreme Court’s spring 2017 ruling on North Carolina’s congressional gerrymander noted, that state’s Republicans routinely won House seats with 56 percent of the vote, compared to Democrats routinely getting about 70 percent. The GOP ‘cracked’ and ‘packed’ that state’s reliable voters to get this result.

For Democrats to get a numerical majority in gerrymandered districts, they typically need between 56-to-58 percent of their reliable voting base to turn out. The GOP’s starting line advantage is before other voter suppression tactics shave off an additional two-to-three percent from Democrats, such as enacting stricter ID laws to get a regular ballot.

This is the political reality that’s on the ground in Ohio, Michigan, Indiana, Florida, Pennsylvania, Virginia and Wisconsin, which, were it not the case, would make the U.S. House blue.

This is where and how Democrats are stuck. Yes, it’s good news that Trump’s popularity keeps falling and 58 percent of the nation thinks ill of his performance. That’s because federal midterm elections tend to reflect the public’s feelings about the party in power, wrote David Cook of the The Cook Political Report.

“It’s fashionable these days to say that Democrats have to stand for something if they’re going to win a House majority and break even in the Senate,” he wrote. “Balderdash. I have never seen a party win a midterm [federal] election on the issues; midterms are always a referendum on the party in power.”

But Democrats face multiple layers of bad luck in Congress, as Cook’s colleague David Wasserman noted in another recent piece.

“Even if Democrats were to win every single 2018 House and Senate race for seats representing places that Hillary Clinton won or that Trump won by less than 3 percentage points — a pretty good midterm by historical standards — they could still fall short of the House majority and lose five Senate seats,” Wasserman wrote, citing the gerrymanders as setting the stage for the House races, and plain old bad luck for the Senate side of the story. (Senate races are statewide and thus not susceptible to gerrymanders.)

“Democrats have been cursed by a terrible Senate map in 2018: They must defend 25 of their 48 seats, while Republicans must defend just eight of their 52,” he wrote. The long-term prognosis for Democratic control of the Senate is also pretty bleak, he explained.

“In the last few decades, Democrats have expanded their advantages in California and New York — states with huge urban centers that combined to give Clinton a 6 million vote edge, more than twice her national margin,” Wasserman wrote. “But those two states elect only 4 percent of the Senate. Meanwhile, Republicans have made huge advances in small rural states — think Arkansas, North and South Dakota, Iowa, Louisiana, Montana and West Virginia — that wield disproportionate power in the upper chamber compared to their populations.”

Where does this leave Democrats in mid-2017? Many in the national political press, from the Post’s Balz to NPR, are saying the Republicans “have never been so dominant — or vulnerable.”

That assessment is a bit fanciful. When you are this far down, there’s nowhere to go but up. Winning a few state legislative or congressional seats is not taking back majority power. Being a few points ahead of the GOP in recent national polls isn’t enough of an edge to overcome the GOP’s 10-point starting-line advantage conveyed by their gerrymanders and voter suppression tactics in what should otherwise be purple states.

The country’s political divisions are vast, deep, historic and daunting. In short, while Trump might be losing support and struggling to build a border wall, Democrats are struggling to tear down political wall and structural advantage created by GOP this decade.

“The United States has split into two political nations,” wrote Richard E. Cohen for the Cook Political Report’s upcoming new edition of its Almanac of American Politics. “In each of those distinct coalitions, the majority Republican or Democratic Party separately controls at least two-thirds of the presidential Electoral Votes, the seats in Congress, and the governorships. That leaves the balance of power with roughly 20 percent of the states and voters . . . [where] the nation’s political control is determined. For the foreseeable future, significant shifts in the overwhelming numbers on each side seem unlikely.”