Fall movie preview: The 10 films we’re most excited for 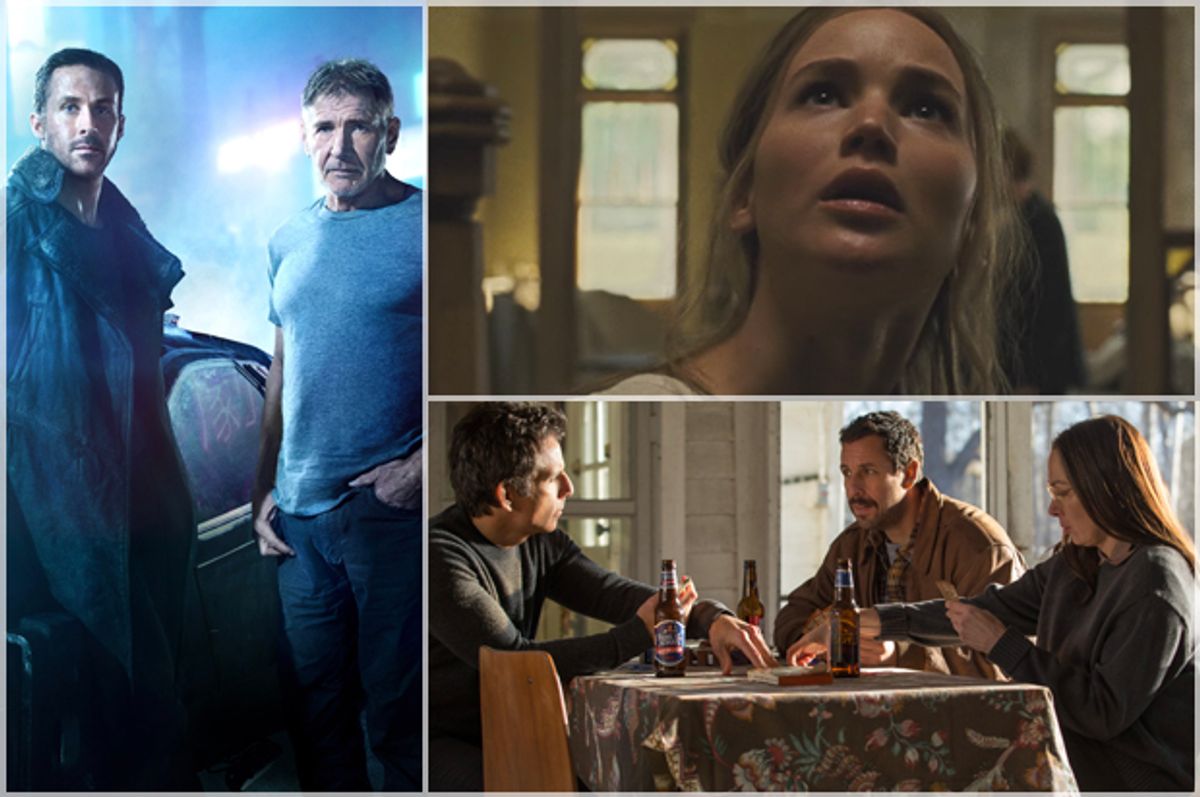 The leaves are about to change and the movies — which have already been quite good this year — are about to get stellar. Coming this fall to a movie theater — or streaming site — near you are films from the best veteran directors in the biz, as well as exciting new projects from young talents. Precocious six-year-old Floridians, a shrunken Matt Damon, the mid-20th century London fashion world: it’s all happening. It’s never too early to fantasize about the fall movie slate, so here, in the middle of August, is our Fall Movie Preview, in which we pick the ten films we are most looking forward to.

Name a living director better at putting audiences at the edge of their seats and keeping them there than Darren Aronofsky. His best films have an unparalleled intensity running through them. "Mother!", which stars Jennifer Lawrence, Javier Bardem and Ed Harris, is a film I can’t wait to want-to-but-not-want to look away from.

Two fashion designers, the sisters Kate and Laura Mulleavy, team up for a Kirsten Dunst pic about a girl who takes a drug and suffers from intense paranoia. It is sure to be visually sumptuous, if nothing else.

Remember the guy who made a film about Los Angeles transgender sex workers on his iPhone? He’s back and headed to Florida. And this time he’s focusing his camera on a group of ragtag six-year-olds who spend their summer doing things like begging strangers for ice cream money.

With Denis Villeneuve at the head, the new “Blade Runner” is what you want to see from a sequel or a remake: a franchise brand being used as cover for an ambitious artist to make a giant, no-cost-barred piece of cinema.

Yorgos Lanthimos, who you probably know as the director of “The Lobster,” makes exquisitely odd films. This one, which also stars Colin Farrell, is about a boy’s attempts to hook his mom up with a brilliant surgeon. Also, the boy (Barry Keoghan) asks the surgeon (Farrell) to show him his chest hair. Which he does.

Noah Baumbach’s last four movies have either starred Greta Gerwig or Ben Stiller. The difference has amounted to one of enchantment: The Gerwig movies, which I am partial to, have been light and romantic, where the Stiller films have been more cynical. Baumbach’s latest stars neither actor. It is about a family that reunites in New York to celebrate the patriarch’s artistic work. And the cast is perhaps the best Baumbach has worked with. It is stacked from top to bottom, with the likes of Adam Sandler, Grace Van Patten, Dustin Hoffman, Elizabeth Marvel and Emma Thompson at the top of the call sheet and stellar character actors (plus Adam Driver and Sigourney Weaver) further down. I don’t know what to expect tonally. But I do know this much: There’ll be some great performances.

Also this fall comes “Lady Bird,” Gerwig’s solo debut as a writer-director. It is about a student (played by Saoirse Ronan) at a conservative Catholic Sacramento high school who wants to flee the suburbs and hightail to the Big Apple. Gerwig’s track record, both as an actor and as a co-writer and co-director, is pretty outstanding. So I have high hopes.

Essentially Alexander Payne’s take on “Honey I Shrunk the Kids,” in which Matt Damon is the shrunken. You probably have a lot more questions. So do I.

9. Yet to be titled Paul Thomas Anderson film (December)

Two separate Los Angeles noir thrillers. The first of which comes from David Robert Mitchell, maker of “It Follows.” The second, from Aaron Katz, I saw at BAMCinemaFest, and it is one of my favorite films of the year.