From "All Lives Matter" to the terror in Charlottesville: How the media's phony fairness got us here 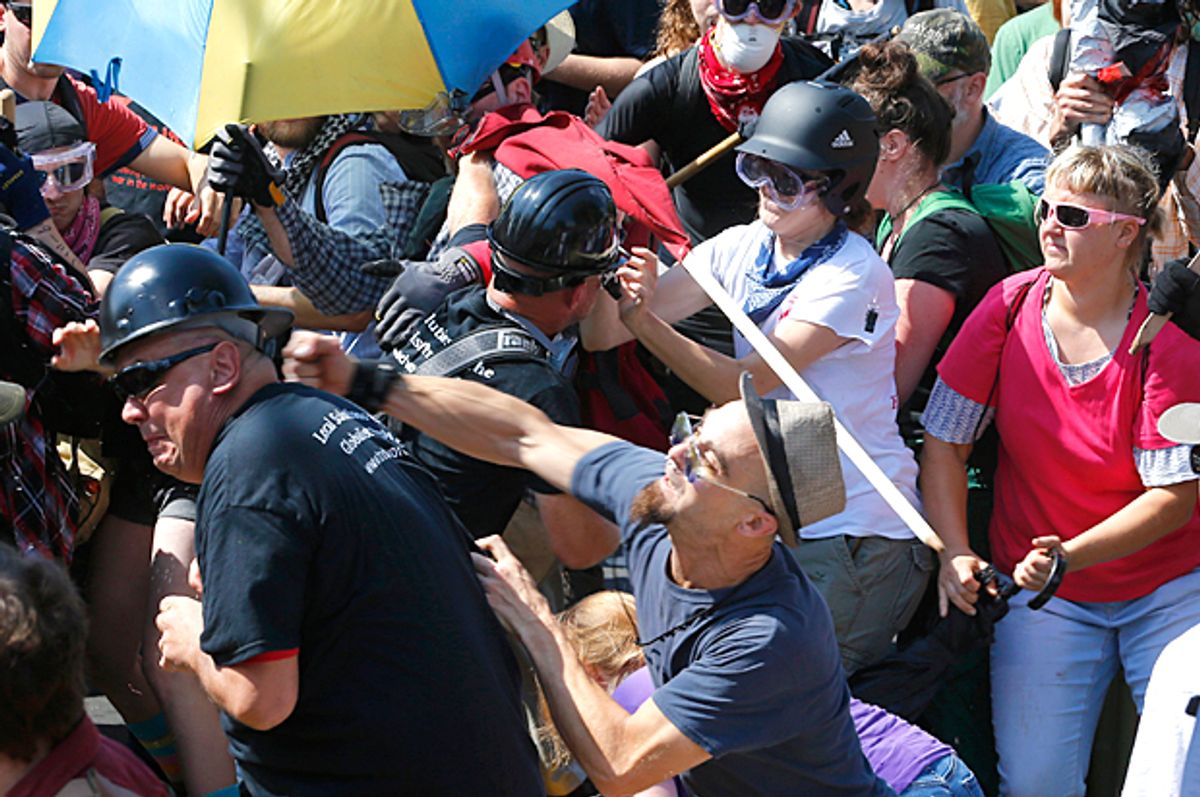 The Ku Klux Klan wears white robes because its members are channeling the ghosts of the Confederacy. The Ku Klux Klan burns crosses as a way of intimidating African-Americans and other groups who they deem to be their enemies.

The white supremacists who ran amok in Charlottesville, Virginia, last weekend do not wear white robes. Nor do they cover their faces. Instead, this new generation of white supremacists wears a uniform that consists of khaki pants, white shirts and red "Make America Great Again" hats in emulation of their idol, the current president of the United States.

Their regalia may differ from that of the white supremacist terrorists who killed at least 50,000 black Americans in the decades following the Civil War, but the threats and intimidation are very much the same.

The neo-Nazis, Kluxers, members of the so-called alt-right and the other white supremacists who descended upon Charlottesville to "Unite the Right" attacked anti-racist counter-protesters with bats, clubs, poles and sticks.

They threatened people with assault rifles and pistols. They threatened to burn down a black church. They assaulted members of the clergy. This was no minor donnybrook or fracas. It was a rampage. And the police did little to stop the attacks.

The effort to unite the right around a politics of hate would culminate in an ISIS-style terrorist attack that killed a 32-year-old woman named Heather Heyer and injured dozens of other people.

The white supremacist terrorist attack in Charlottesville should not come as a surprise: It is the logical and predictable culmination of the violence, racism, intolerance, prejudice and hatred that Donald Trump used to win the 2016 presidential election. Bathing in these social ills was his political baptismal rite. The Republican Party and its voters poured this water over Trump's head. Their embrace of white supremacy from the "Southern strategy" of the 1960s to birtherism made his victory possible.

Of course, white supremacy is not new in America. It is a primal force that existed well before the founding of the country. Its influence has modulated and evolved over time. It remains all too powerful in the post-Civil Rights era.

The mainstream American news media was complicit with Trump's rise to power. It is estimated that he was given at least $5 billion worth of free coverage. During the 2016 presidential campaign they made excuses for Trump by focusing on his imagined intentions as opposed to the vile things he actually said and did. The mainstream media was obsessed with how and when Trump would inevitably become "presidential." Further gutting its own tenuous legitimacy, the Fourth Estate also slavishly followed old rules and expectations regarding "fairness" and "balance" and "objectivity" in their discussions of Trump -- a man who has no respect for democracy, despises the very idea of a free press and holds the truth in contempt. And of course, too many in the mainstream American news media were drunk -- and still are -- on the delusion that Mr. Trump led a "populist" campaign that spoke to "white working class economic anxiety." In reality, Trump's white voters were largely motivated by racism and bigotry.

Too many voices in the mainstream American news media continued those dangerous and irresponsible habits in their coverage of the Charlottesville white supremacist attacks.

Many in the media repeatedly used the words "white nationalists." This implies a difference where none really exists. White supremacists and "white nationalists" both believe that nonwhites -- especially black people -- are inferior.

Many in the media repeatedly talked about the "alt-right." That label was born of an effort to normalize the abnormal and the foul. The so-called alt-right are white supremacists, neo-Nazis, "white nationalists," right-wing militia members and wannabe domestic terrorists.

Many in the media described the white supremacists and their allies running amok in Charlottesville as part of a right-wing "fringe" movement. This supposed "fringe movement" shares many of the same attitudes and beliefs held by rank-and-file Republican voters as well as the party's leaders.

These habits are, of course, not new. They were previewed several years ago when Trump began his political crusade for the White House. These habits also have antecedents, which at the time seemed reasonable and benign to many members of the mainstream American news media specifically and White America more generally.

But others -- especially students of the color line and those of us who have to navigate white racism in order to survive -- understood the deeper and more menacing implications of these "reasonable" questions.

Several years ago, the human rights campaign Black Lives Matter emerged in response to the continued abuse of black and brown Americans by the country's police and other institutions. The movement's slogan is both an existential observation about the value of black people's lives and a demand for justice and equality in American (and global) society. The statement that "Black Lives Matter" is also an affront and provocation to whiteness because the latter is a social and political identity prefaced on domination and power over people of color.

Thus it was no surprise that "Black Lives Matter " was rebutted by "White Lives Matter." This is the new "Sieg Heil!"

Thus it was no surprise that "Black Lives Matter " was rebutted by "All Lives Matter." This is the new "White Power!"

Thus it was no surprise that "Black Lives Matter" was rebutted by "Blue Lives Matter." This is an assertion that America's police have the inherent right to engage in thuggery, murder and brutality against people of color without consequence.

The American news media coughed up many "thinkpieces" and "hot takes" on Black Lives Matter -- both the phrase and the movement -- speculating about whether "White Lives Matter" and "All Lives Matter" were more appropriate and "less confrontational" ways of talking about social injustice. Such work legitimates white supremacy and protects white privilege as the status quo in American society and life.

To write favorably about "All Lives Matter," "White Lives Matter" or "Blue Lives Matter" is to accept the premise that white Americans are disadvantaged in America because of the color of their skin. To assert the obvious value of white lives in a country that was literally built on the murder and enslavement of nonwhites is intellectually and morally perverse. It is also redundant: Every major social, political and cultural institution in American society exists to affirm the inherent value of white people's lives.

The writers, journalists, editors, websites and publications who trafficked in the bloody currency of "All Lives Matter," "White Lives Matter," or "Blue Lives Matter" owe the American people an apology. They helped to elect Donald Trump. They also share responsibility for the white supremacist terror that was unleashed in Charlottesville over the weekend.

Those members of the Fourth Estate who are willing to reevaluate their role in the national calamity of Donald Trump's regime can learn an invaluable lesson from the past.

During the Civil Rights movement, many white journalists were on the front lines of a life-and-death struggle to end Jim and Jane Crow. These American heroes, through their words and photographs, shamed White America before the world and by doing so helped to bring down Jim and Jane Crow's reign of terror. These journalists (both white and black) knew that one could not be "objective" or "fair" in the face of evil. To tell the truth meant that "balance" and "neutrality" were by definition not possible. Ultimately, reality and the truth are scales of a sort, but they do not treat both sides equally. This is a lesson that too many members of the American news media have apparently forgotten.

These lessons will need to be relearned -- by journalists and by the American people -- if they are to be on the right side of history in the struggle against Donald Trump and what he represents.