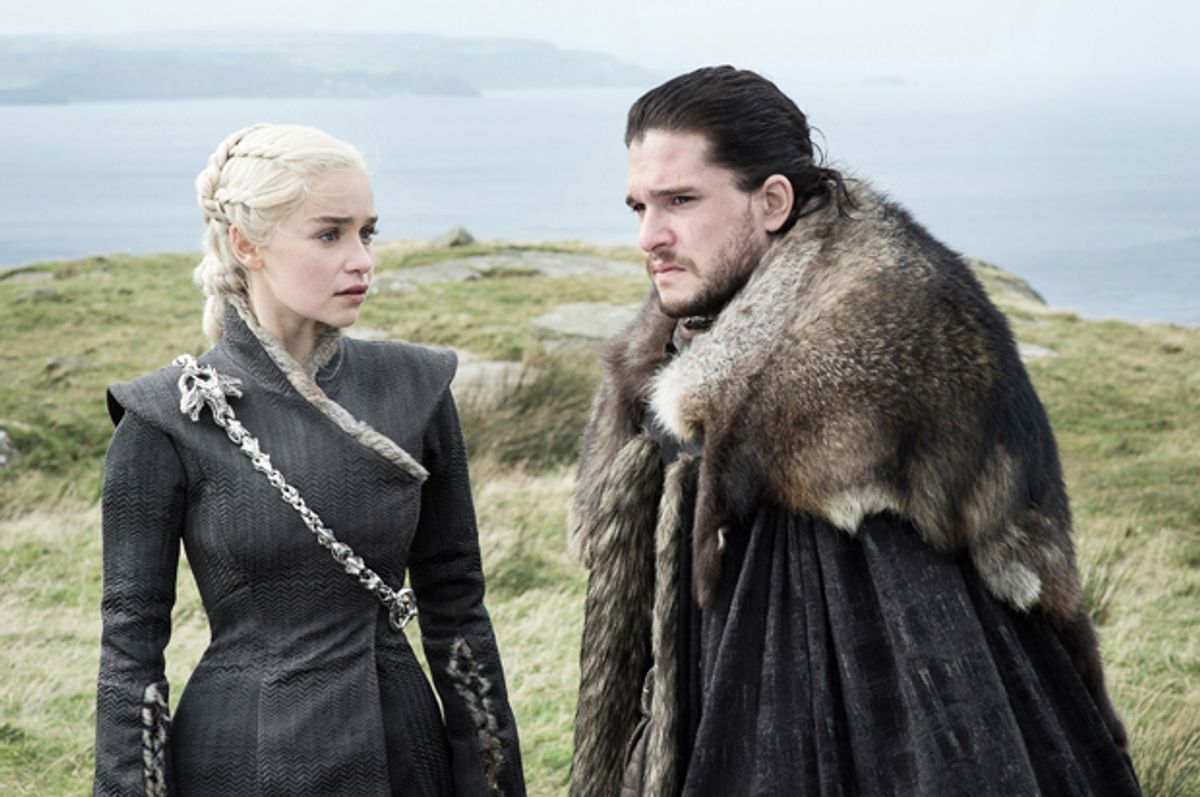 Chaos may be a ladder, but the road to the end of every “Game of Thrones” season usually contains a bridge. The seventh season’s is named “Eastwatch,” an episode designed as a link between the exposition-laden first portion, handily split in two with dragonfire, and the last two episodes.

Every season’s penultimate episode has a technically challenging and visually impressive battle as its centerpiece. We already enjoyed one of those in the current set of episodes with “The Spoils of War” and are due to get at least one more next week, in the form of a Westerosi version of “The Dirty Dozen.”

After Bran (Isaac Hempstead Wright) has a raven-assisted vision of the Night King’s army closing in on Eastwatch, Tormund Giantsbane (Kristofer Hivju), Jon Snow (Kit Harington), Ser Jorah (Iain Glen), Beric Dondarrion (Richard Dormer) and Sandor Clegane (Rory McCann) and what appears to be a few other Wildling red shirts head North of the Wall to snatch themselves an undead former person. Why? They want to show it to Queen Cersei (Lena Headey) so she will finally believe the tales of White Walkers on the move. And there’s nothing rich ladies like better than free samples of rare items.

As exciting as the scenes from next week make this adventure appear to be, it’s also an incredibly dumb plan. Even though it’s a scheme concocted by Tyrion (Peter Dinklage), we’re talking about Cersei here, a woman who’s knocked up yet again by her twin and doesn’t intend to hide it. Cersei is the fantasy world’s Janice from accounting: she doesn’t give a f—k.

Why are people still taking Tyrion’s advice? Daenerys Targaryen (Emilia Clarke) has only made progress in her campaign to retake the Iron Throne by not listening to him.

“We want to help people. We can only help them from a position of strength,” Dany explains to Jon Snow following her triumphant return to Dragonstone, adding: “Sometimes strength is terrible.”

She’s right. These words also explain the conundrum posed by the patchwork plotting of “Eastwatch”: every plot thread is important, and no single one drove this episode. “Eastwatch” featured very few secondary stories, save for Ser Davos’ (Liam Cunningham) retrieval of Gendry (Joe Dempsie). There are now only characters we know well facing odds we can’t quite wrap our heads around. Each set of characters faces the common threat separately, and while contending with their own distinct set of obligations and the twin fetters of honor and pride.

Even Samwell Tarly (John Bradley-West) knows the Citadel storyline is flatter than pressed parchment. Once the maesters refuse to heed Bran’s call for assistance from Winterfell, Sam decides he has had it, officially. Thank god. He grabs Gilly (Hannah Murray) and stacks of books from the library, and beats cheeks out of Old Town to get back to the thick of the action.

Meanwhile, Jorah has returned to his Queen and the Onion Knight has retrieved the hidden bastard son of Robert Baratheon. Everybody loves Gendry (Joe Dempsie) who has been quietly channeling his rage into forging weapons, including an impressive maul he uses to take out a couple of guards on his way out of town.

What’s left for us is to closely follow the plots as they unfurl at Dragonstone, King’s Landing, Winterfell and the Great Wight North. This episode tightens up the laces prior to the season’s main events; we took in a great many important details writ small in service of the great war to come, albeit one that’s taking its sweet time to get here. But the little things mean everything in the aggregate, so let’s look at each part separately.

“There are no easy choices in war,” says Randyll Tarly (James Faulkner) before choosing honor over life as a loyal subject of the last Targaryen, and letting Drogon roast him alive, along with his himbo of a favorite son Dickon.

In the Reach Daenerys solidified her reputation as a force to be reckoned with by flambéing the Lannister army with a side of crispy fried Tarlys.

But back on Dragonstone, she’s just a girl standing in front of a boy she doesn’t realize is her nephew and asking herself, "Why is he able to touch my dragon?" Clarke and Harington each do some tremendous acting through their eyes or around the edges of their lips, in such a way that Dany and Jon display their attraction to one another while saying little.

“Eastwatch” dropped the most definitive confirmation of the magnetic pull of Jon's Targaryen DNA, when Drogon nears Jon — aggressively at first, but then with curiosity and what appeared to be a recognition of kinship. Somebody has to ride one of those other dragons.

More significant was that throwaway nattering from Gilly that Samwell ignores as she reads from the journal of a high septon who recorded everything, including his bowel moments. Gilly blathers on about a small but important kernel in the turds about said septon’s annulment of Rhaegar’s union with Elia Martell and immediate marriage to somebody else — Ned Stark’s sister Lyanna, according to one of Bran’s previous visions — in a secret ceremony in Dorne. Sam interrupts Gilly with a frustrated outburst. But we didn’t miss it because we now the little people in Westeros say and do the most important things.

Season 7 has left Jaime Lannister (Nikolaj Coster-Waldau) much worse for wear but perhaps more humane than ever. In “The Spoils of War” he witnesses his men reduced to ashes only a few feet away from him. At last Jaime feels what it’s like to be among the conquered.

Cersei, meanwhile, is content to orchestrate it from a distance, never really getting her hands dirty. And she does not appreciate it when truth stares her in the face through her twin’s eyes, letting her know that they’re outmatched. When he tells Cersei than the Dothraki and Drogon cut through his men like rendered boar fat, Cersei calmly answers that they have the gold to buy more.

“So we fight and die, or submit and die. I know my choice,” she hisses, adding with an insulting tone, “A soldier should know his.”

Ah, but then there’s the matter of Tyrion, who is unable to prevent the flame-broiling of the Tarlys for refusing to bend the knee. Tyrion is steadfast in his loyalty to Dany but visibly chafes at the realization that she cannot appeal to her sense of mercy when a stubborn foe is too proud to admit defeat.

Once again Dinklage proves he’s one of the best actors on this show by connecting viewers to Tyrion’s frustration through his stinging winces and frustrated squints. Varys (Conleth Hill) doesn’t do much to make Tyrion feel better, as he points out that failing to stop a ruler from burning people alive may make him as culpable in their execution as the person a counselor serves.

Thus, in order to prevent himself from feeling even less guilty, Tyrion sneaks into King’s Landing to parley in secret with Jaime to persuade their Mad Queen sister to agree to a temporary armistice so everyone can join together and face the incoming horde of blue eyed devils slowly shambling Southward.

The Queen can do what she wants, including threatening Bronn (Jerome Flynn), the man who saved Jaime’s life and has been giving him advice on how to remain alive, if only he’ll take it. But with dreams of another golden-haired baby in his sister's evil oven Jaime may be truly, deeply whipped.

Arya and Sansa . . .  and Littlefinger

Season 7’s writers never slack on reminding us that Sansa Stark (Sophie Turner) is a thirsty lass, and in case a person wants to relax her vigilance, the scheming Petyr “Littlefinger” Baelish (Aidan Gillen) is always within whispering distance. In “Eastwatch,” Lord Baelish’s smirk looks particularly unctuous; it’s the grin of a man tuning up his marks like violinist lovingly adjusting a Stradivarius, with the goal of conquest via division.

When the Northern lords and the knights of the Vale tempt Sansa with flattering remarks about her leadership, Sansa graciously reminds them that Jon is still King in the North and she’s just keeping the family seat warm. She’s compelled to do this because Arya, the family assassin (Maisie Williams), is watching her every footfall. Later on Lil’ Killer Elite confronts Sansa on her elitism and her desire for “nice things” like, say, control of Winterfell.

Sansa attempts to reassure Arya that she only wants to keep everyone in a collaborative mood to hold everything together.

“And if Jon doesn’t come back, you’ll need their support,” Arya observes. “So you can work together. To give you what you really want.”

“How can you think such a horrible thing?” Sansa says, and Arya replies, “You’re thinking it right now. You don’t want to be. But the thought just won’t go away.”

Sansa doesn’t appreciate Arya’s creepy insight. And Littlefinger doesn’t appreciate Arya creeping around, so he makes a show of obtaining a scroll for Arya to conveniently find in his mattress. Said scroll happens to be the message Cersei made Sansa write to her family claiming their father Ned was a traitor who aspired to take the throne. At best, it makes Sansa look like a craven pretender more concerned with keeping Joffrey happy.

Or maybe Arya’s smart enough to see through it. We’ll see, hopefully in that penultimate episode we’ve been waiting for.