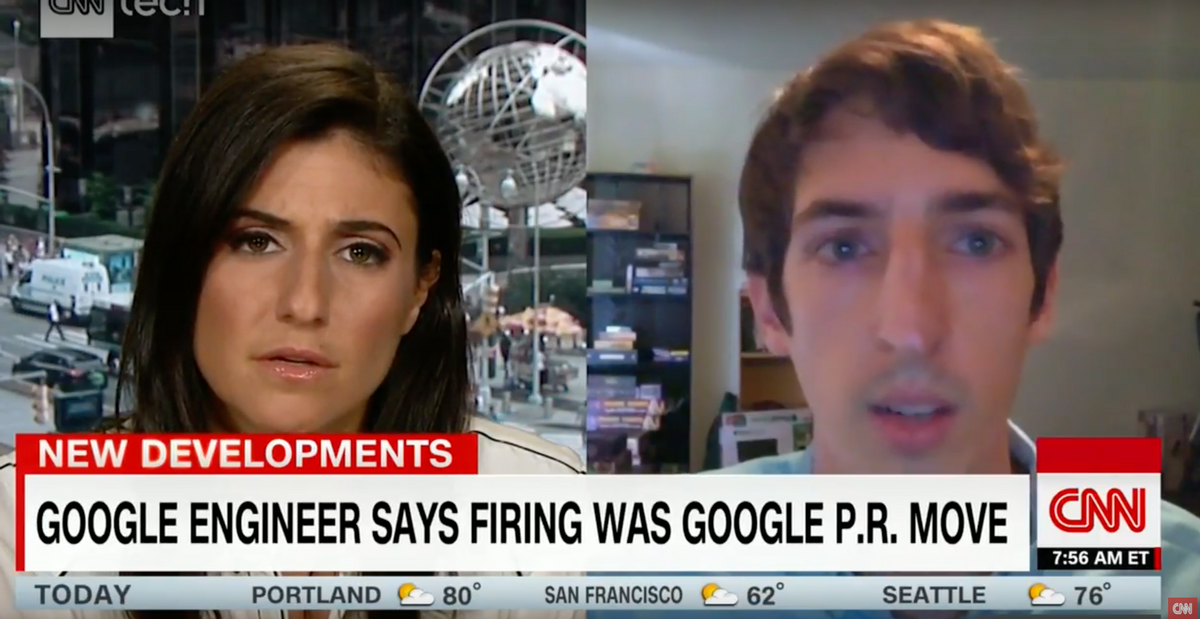 In an interview aired Tuesday on CNN, James Damore — the former Google engineer recently fired for his controversial comments on diversity in the workplace — said "he does not support the alt-right."

"Just because someone supports me doesn’t mean that I support them,” Damore said. He called himself a "centrist."

Damore was fired after his memo — which argues that men are better represented in tech than women because they have a "higher drive for status" — was widely spread online last week.

Damore was pressed by the accuracy of his assertions, though, by CNN's Laurie Segall. “Computer science, it hasn’t always been dominated by men," Segall asked. "It wasn’t until 1984 that the number of women studying computer science started falling. So how does that fit into your argument as to why there aren’t more women in tech?”

Damore said the decline in women in the tech industry was because jobs were "more like accounting rather than modern day computer programming. It wasn’t as lucrative, so part of the reason so many men go into tech is because it’s high paying. I know of many people at Google who weren’t exactly passionate about it, but it was what would provide for their family and so they still work there.” But Segall once again pushed back:

Look at Grace Hopper, who pioneered computer programming. Margaret Hamilton, who created the first ever software, which was responsible for landing humans on the moon. Catherine Johnson, Mary Jackson, Dorothy Vaughn, they were responsible for John Glenn accurately making his trajectory. Those aren’t accounting type jobs?

There are competent women programmers. There are many at Google. The women at Google aren’t any worse than men at Google. I’m saying is that there were many positions that were listed as "coding" that are different than what coding currently is.

Other than speaking with alt-right YouTube personalities and interviewing on CNN, Damore said he's still unsure about his future. “There’s been book deals and things but I’m still very new to this.”