Netflix's "The Defenders" isn't the best Marvel series, but it may be what we need right now

When real leaders refuse to call evil by its name, there's some solace in watching heroes fight against it 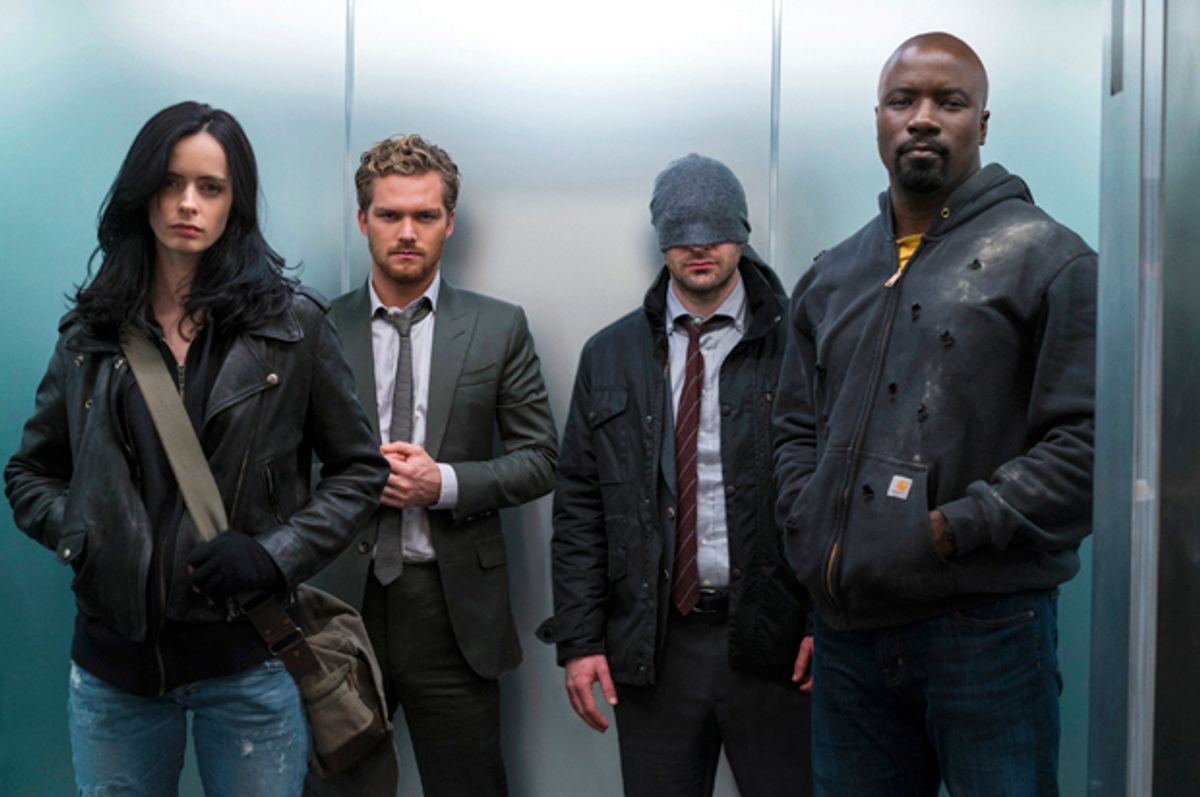 Before diving into a review of “The Defenders,” rolling out this Friday on Netflix, I am compelled to state that watching live TV can be unbearable right now. I’m not referring to the unscripted competition series frosting the prime time schedule or other lackluster summer programming. I’m talking about the hateful reality that’s slapping all of us in the face.

Plenty has been and will be written about the atrocities that occurred over the weekend in Charlottesville, Virginia — the footage of torch-wielding mobs of white supremacists on the University of Virginia's campus last Friday, the constantly replaying clip of that sports car plowing into a crowd of people, injuring at least 19 and killing Heather Heyer on Saturday. These, I believe, are images we are obligated to absorb and discuss and above all, remember.

Television, history teaches us, played an important role in motivating complacent white moderates to support the Civil Rights movement in the 1960s, when ninety percent of Americans owned a set for the first time in American history. Television brought the Vietnam War into American living rooms.

Viewers in the 1960s and ‘70s weren’t dealing with sustained, prevalent and technologically-assisted attacks against the media. Networks weren’t brazenly devoted to enabling and cementing political and social tribalism. But a number of them are now.

In the Civil Rights and Vietnam era, viewers weren’t spoon-fed hours upon hours of chirping rationalizations for white supremacy and half-baked defenses of slaveholders such as those spewed on Fox, whether by Tucker Carlson or Jesse Watters on “Fox & Friends” or by President Donald Trump himself. None of that is shocking, but in the aggregate, it gnaws away at the spirit.

Go ahead and watch Monday night’s Vice News episode “Charlottesville: Race and Terror,” because it is frightening and blunt and devastating. I also guarantee that what you’ll see isn’t anything people of color in this country haven’t had nightmares about throughout their lives. Forgive us if we don’t leap to watch it with you. Many of us are heading out on road trips soon and don’t want to add to our already sizable fears of breaking down in rural areas.

And yes, watching the late-night hosts laugh at the devil or, in Jimmy Fallon’s case, publicly acknowledge its corrosiveness for the first time, can be cathartic. Unless you’re past believing any aspect of this lengthy joke on the United States is still funny.

So I have to wonder, how will everything we’ve seen on television since last Friday impact Americans? Any immediate embrace of unity is too much to ask for — we’re a long way down the road from that promised land and honestly, we may never get there. But will what TV is hitting us with finally awaken complacent, decent Americans who, to quote an indisputably great citizen, are “more devoted to order than to justice and prefer(s) a negative peace which is the absence of tension” to face hard truths about what this nation actually is, right now, versus what we dreamed that it stood for?

The honest answer to that question depresses me.

This is why I can’t wait to turn it all off for a while and binge “The Defenders.”

Nothing about “The Defenders” is more political than any of the series leading up to it, the viewing of which is not required to enjoy the team-up Marvel and Netflix have promised since “Daredevil” successfully debuted in 2015. There’s no hidden meaning in the fact that it's premiering a week after armed white supremacists invaded an American town and assaulted citizens as law enforcement officials stood by and watched. Netflix set its debut date months ago.

The assumption is that if you’re tuning in, you at least know who Matt Murdock, aka The Devil of Hell’s Kitchen (Charlie Cox) is. Even if you don’t know much about leathery, hard-drinking private investigator Jessica Jones (Krysten Ritter), Luke Cage (Mike Colter) or the impressively annoying billionaire Danny Rand (played by the impressively unimpressive Finn Jones), what matters is that they’re the good guys standing against evil in the streets of New York City, home to Lady Liberty. Only one of them wears a costume, and each has a disparate motivation to seek justice. Two would rather stay out of the spotlight altogether. But they step up, even the reluctant ones among them, to stand against a common enemy: The Hand.

The Hand is a fellowship dedicated to the destruction of flourishing cities and civilizations. Sound familiar? The cultist crime organization threads through all of the pre-“Defenders” series, and here we receive a glimpse at its all-star line up, including Madame Gao (Wai Ching Ho) and its agent Elektra Natchios (Elodie Yung), two of this section of the Marvel TV universe’s more dynamic villains.

This probably reads like a description of an “insert piece A into slot B” kind of show, and indeed, that pretty much sums up “The Defenders.” It's a fun diversion, albeit a simple one. Nothing in the four episodes sent out for review rises to the level of thoughtful tension fueling “Marvel’s Jessica Jones” or the finest episodes of the empowering if uneven “Marvel’s Luke Cage.” Then again, it’s nowhere close to resembling the debacle that is “Marvel’s Iron Fist,” even if Jones’ Danny Rand remains the weakest link in this fellowship.

“The Defenders” manages to overcome Rand’s initially central role in this plot by leaping between the narratives of his more compelling teammates without spending an excessive amount of exposition on their backstories. Ritter, Colter and Cox are still wonderful in their roles, though some may miss the wit that pervaded “Jessica Jones” and the first season of “Daredevil.”

Jones remains horrendously miscast, although this time around Iron Fist’s stunt double gets an admirable workout in the action sequences. Indeed, most of the fight choreography in “The Defenders” lends the story a welcome velocity that keeps its detractions from weighing things down too much. Yung, especially, attacks her scenes with the appropriate mixture of gusto and a cafard that defines her character, a bookend to Cox’s brooding, seething Daredevil, a former lover.

But the star of this sinister cabal is a woman named Alexandra, played by Sigourney Weaver. Weaver's character isn’t blessed with snappy, profound dialogue because none of the heroes and villains in “The Defenders” are. The writing in this series is best described as economic, in the sense that it is designed to get the story where it’s going without much artful flair. Nevertheless, Weaver sells her queenpin with a cool slickness that raises the energy of her scenes.

For all of their flaws, a few chapters of Netflix's Marvel pantheon have constructed antagonists in ways that deceptively soften them, masking their criminal viciousness. Weaver embodies that manner in a way that rivals Vincent D’Onofrio’s exemplary portrayal of Daredevil’s archenemy Wilson Fisk. Just as he made the first season of “Daredevil” consistently exciting, Weaver’s presence truly provides one of the best reasons to watch “The Defenders.”

Another one is simpler, though. Right now, many of us may be emotionally vacillating between completely disconnecting from the bloody, violent message that is our American reality and punching something really hard. Doing the former solves nothing; doing the latter could worsen our problems.

Catharsis, however, is healthy and necessary to keep moving forward — even the vicarious variety. Especially that, if you’re exhausted and frightened and would simply rather not leave the house for say, eight straight hours. Maybe the antidote to those feelings of helplessness is watching Jessica Jones, an assault survivor, lift a car, or seeing bullets bounce off of Luke Cage’s dark brown skin. Maybe we’ll feel inspired by the sight of a blind attorney disrupting violent attacks on weaker victims with the use of his hand-to-hand combat skill and his athleticism.

Sufficiency, not excellence, may be the legacy of “The Defenders,” and that may be precisely what we need right now. We have leaders refusing to name the malevolence within our borders getting plenty of airtime on live television. We have brave people whose contributions are insufficiently acknowledged, if not outright dismissed or twisted. You’ll have to forgive and understand those of us who seek solace in a fictional version of our world where corruption isn’t qualified or re-framed, and the scrappy protagonists are outmatched but battle to stop it anyway. A world where everybody knows that when destruction and chaos are breaking down one’s front door, there’s no such thing as “many sides.” There’s only good and evil, and which of these we choose to uphold.