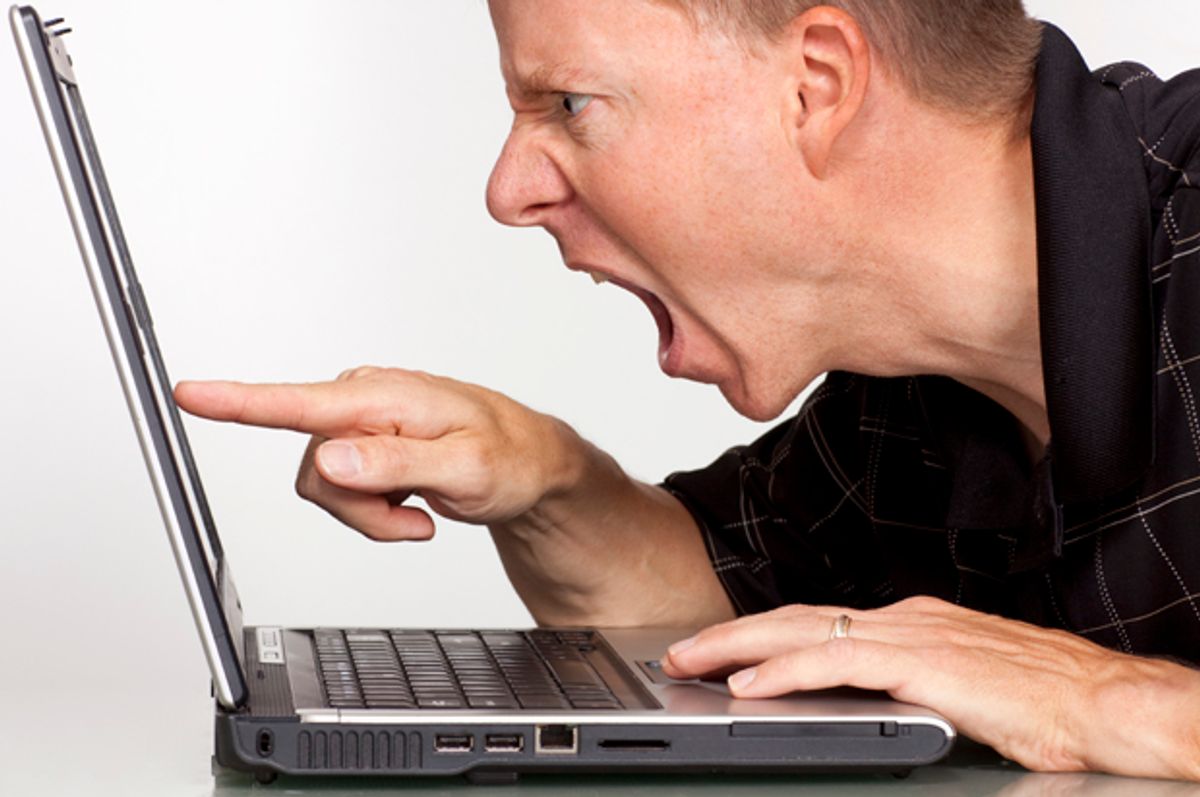 In award-winning journalist and activist Laurie Penny's new collection of essays, “Bitch Doctrine: Essays for Dissenting Adults,” she covers the issues of our age, pulled from her work for a number of publications, including here at Salon, where she's an occasional contributor.

Not much escapes her purview, including politics, pop culture and feminism. On this episode of "Salon Mix," Penny sat down with Salon’s Amanda Marcotte to talk about identity politics, the so-called "alt-right" and why the left would have been better prepared to handle them if they had better listened to feminist writers and writers of color who had been targeted for harassment. [Note: This conversation took place before the events in Charlottesville last weekend.]

I feel like, at least in the United States, we're seeing a lot of people arguing that things like identity politics and feminism are a distraction from that kind of way of thinking. I feel like you are really good at replying to that argument, so I want to hear your analysis now.

Okay, yeah . . . you can just see me go whenever anybody says identity politics in that way, and I appreciate that that's probably not what you think. This idea that gender and race and issues of identity are somehow at odds with the real leftist agenda or of class and economics, it's not just offensive. It's factually incorrect. That's what gets me about is that you cannot have a proper analysis of class and economic power without looking at gendered labor and without looking at race.

It doesn't make sense. It doesn't make economic sense in any country in the world, but particularly not in the United States where the entire class system is predicated on slavery and predicated on that kind of annexation of human labor. The entire way that jobs and wage labor works is predicated on the fact that a lot of people do a great deal of the work that needs to be done in society for free, mainly women, often women of color, and this is basic economics.

It's not a matter of cultural politics. It's economically idiotic to argue that you can talk about class only through an objective lens, which obviously means white guys. I mean, as it relates to the white working class which is this phrase we've seen tossed around a lot here and in the UK. All politics are identity politics is the second point. All politics are identity politics, especially the politics of the far right.

They are about this idea of white identity, this idea of male identity that feels so under attack at the moment. When people attack identity politics, they are attacking politics that prioritizes or even includes women, people of color, queer people, and I just don't understand how a socialist politics that doesn't put people who aren't white and male front and center can get anything done. Actually, if you look at what's happening on the ground, if you look at the actual organizing that's being done, it is women, it's people of color, it's queer people actually doing the organizing in their communities. It's just that you don't . . . people who are the loudest voices in the left often want to kind of obviate that.

I get quite upset about this because I'm obviously an emotional lady and nobody should listen to anything I say, but . . . [Laughs.]

Well, I couldn't agree more. Speaking of something kind of hilarious and fun, we have something in common. We have both had fairly publicly-watched encounters with Milo Yiannopoulos.

— do those people exist anymore?

He's a [former] Breitbart writer who is basically trying to put a fun, gay — like actually gay — presence in the sort of fascist movement now.

Well, no. He's a sociopath who is making a career off the alt-right and this cult of personality that he's kind of glommed onto, and a deeply unhappy person, not that that matters too much because he's actually making a lot of other people unhappy by proxy, which matters more. But yeah, the . . . oh, god. Milo, I really don't want to talk about him ever, ever again.

Okay, we can move on.

No, no. It's all right because people will ask me about this; the essays about Milo are not actually in the book. I deliberately left them out because if people are going to find them, they can find them, but I don't want to be the person who writes about Milo.

But I find it interesting that . . . because I knew him before he was "Milo," when he was just some vaguely right wing, young, conservative dude running around the UK, trying to get on the TV, and he burned all his bridges in the UK because everybody realized he was completely nuts in a bad way and didn't want to work with him. So he came to the U.S. where nobody realizes that he's joking. Everybody takes him seriously, and that's, for somebody . . . it's exactly what people in the Trump administration do, it's this weaponized trolling. The point is that just because somebody doesn't mean the evil things they say seriously, it doesn't mean that people aren't out there taking them seriously —

Well, it's certainly his followers.

— and it doesn't mean that they don't leave damage. Of course, yeah, it's this howling void of moral affect. This guy, he will say anything. He'll say anything. It doesn't matter to him what he says and who . . . because I don't think he has a real sense . . . I don't think a lot of them have a real sense of the damage they do, but that doesn't matter at all. I think, if they cared to know, they would find out quite easily, but as with so many people who do political work on the right, there are things you deliberately choose not to know because if you chose to know them, you would have to change your outlook on everything. You probably wouldn't be able to do the work you've chosen to do with your one bloody life. It's really upsetting.

I mean, setting him aside, it struck me as interesting, and the way you wrote about these followers. Also, just generally, you have a number of essays in the book where . . . because I think there's the "alt-right" and all these angry young men really kind of go after women like you, especially, who are science fiction writers and involved in —

They came for the nerd girls first, which was . . . it started with Gamergate, which — I don't think we have a need to explain, actually, do we? That campaign of harassment against women in the games industry — and it started with Gamergate and with anti-feminist trolls in general, the harassment of women online. And this started years ago, years and years ago. I've spent years, and so many other people I know have spent years saying, "This is serious. These people really mean us harm, and they are doing harm —"

Yeah, we were told, "Oh, just get off the internet. You're overreacting, silly women. It's just words. Words can't hurt you." And now, these people are taking power around the world, this canny weaponized trolling, and we don't have . . . I feel like it's not something I enjoy being right about, actually. It's not a kind of "I told you so" that gives any of us any pleasure, but I feel like if more attention had been paid to the tactics and techniques that were being used against women and writers of color and minority activists five or six years ago, not necessarily the election would've been different, but the left wouldn't be so much on the back foot right now. But it was just ignored because it was only women and people of color being targeted, so . . .

Why do you think that the right has become so nihilistic in that way? I mean, it started with Gamergate, and it's this kind of politics of trolling like you said. I mean, it feels like they're only out to destroy.

Yeah. I think it gives them satisfaction. I think it's an easy . . . look, I'm not actually, myself, a gamer. Many of my best friends are gamers, but I'm not a gamer, myself. I know many gamers. Sometimes, we hang out and do gamer things like watch "Game of Thrones," but no, I never learned it as a kid. We weren't allowed to play games when I was growing up. It's a gaming mentality, and it's a mentality of winning. They see the entire world as a series of boss battles and a series of fights, and that's how they understand politics. It is a way of doing electoral politics, a vicious, evil way of doing it, so you see everybody else, particularly when you're behind a computer screen, as a set of obstacles, a set of featureless, faceless, not-really-real people who you can line up and knock down. You set your own win conditions, and they decided that the win conditions the big boss battle, was getting Trump elected.

Now, they're not quite sure what to do because actually, one of the interesting things that's happening and one of the things that gets the most upset if you point it out is that there was a sense of frustrated underdog society . . . there was a feeling that they were the real overlooked people in society and they were the Rebel Alliance, and they were bravely fighting back — I know, it's true — against the forces of feminism which had taken over the world. Leaving aside how quite they got to this unbelievable point of view, their guy is in power now.

They're not the resistance anymore, if they ever were. They're not underground. They're not alternative. They're just the right. They're just the same old right, and a lot of people are . . . that's actually quite existentially threatening for a lot of these people who are often very young guys who all see themselves as the heroes of their own story, bravely fighting this resistance battle. I think, look, a lot of it — and this is something we do say in the book — is that you understand a great deal more about politics when you understand that everybody believes they're the hero of their own story, and very few people believe that they're the baddies. You know?

If you point that out to people, they usually don't turn around and say, "Oh, my god. We've been wrong this whole time." I've very rarely seen that happen. The kind of work I'm doing at the moment is about giving people . . . not necessarily offering the hand of friendship but pointing out ways back across that divide because I don't think it's too late for a lot of people. People disagree with me on this, right? I'm not going to tell anybody how it organize. Absolutely not, a politics based on militant understanding up to a point of no return, I think, has a lot to say for it because you can't write off everyone who has been seduced as a young kid into this evil mindset. It's much, much easier to write off ideas than people, morally easier. I think there is still space for us to distinguish.