Carlson says that slavery is evil, before comparing white American slaveholders to native Americans and Plato 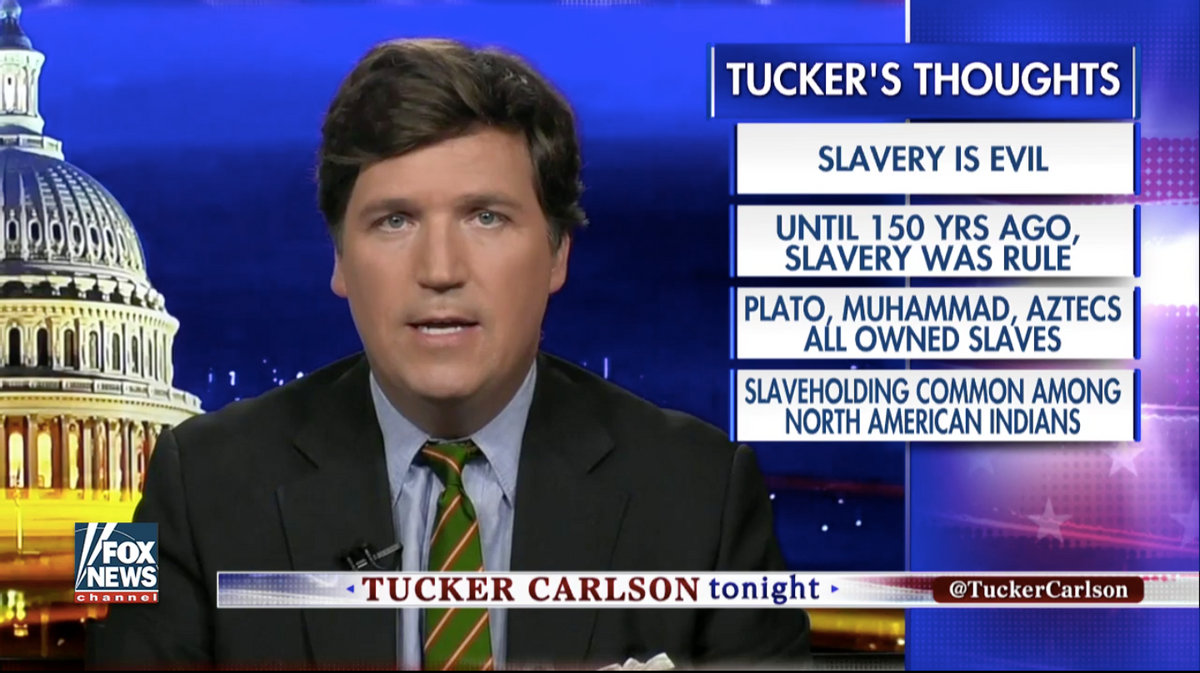 In Tucker Carlson's mind, the left's zero tolerance for racism and hate speech is the real danger to America — not the violent white supremacists who no longer feel compelled to hide in the shadows.

The Fox News host put up a graphic on his show, "Tucker Carlson Tonight," Tuesday to explain to his audience that everyone around the world practiced slavery to a certain extent, so that renders the white American colonists exculpated from their incredible wrongdoing.

"Slavery was the rule rather than the exception around the world," Carlson said. "Indians were holding and trading slaves when Christopher Columbus arrived. And, by the way, he had slaves too."

"The point is if we are going to judge the past by the standards of the present, if we are going to reduce a person's life to the single worse thing he participated in, we had better be prepared to face the consequences of that," Carlson added.

Carlson decried the left's attempt to rid this country of monuments to Confederate soldiers. "There is literally no limit when you start thinking like this," he said.

Apologists of white nationalists and white supremacy, such as Carlson and President Trump, have revealed a pattern. First, they quickly condemn racism and bigotry. But then they go on long tangents that whitewash America's racist history. Carlson argued that the founding fathers could not have been "simply racist villains" because that would mean the society they created was "as evil as they were."

Confederate sympathizers have a right to march and protest the removal of their past, according to Carlson, but black people demonstrating against the murder of their friends and family is immoral and reverse racism.

"There's no racism on the left. They are just sincere people concerned about hate," Carlson sarcastically said at one point of his monologue.

Carlson warned his viewers that liberals were coming for America's past and said that it was up to the Fox News audience to fight for "the absolute right to say and believe anything you choose."

Carlson has officially made a bigger fuss over the removal of a couple of Confederate statues than he has over the death of an innocent woman at the hands of a white supremacist.