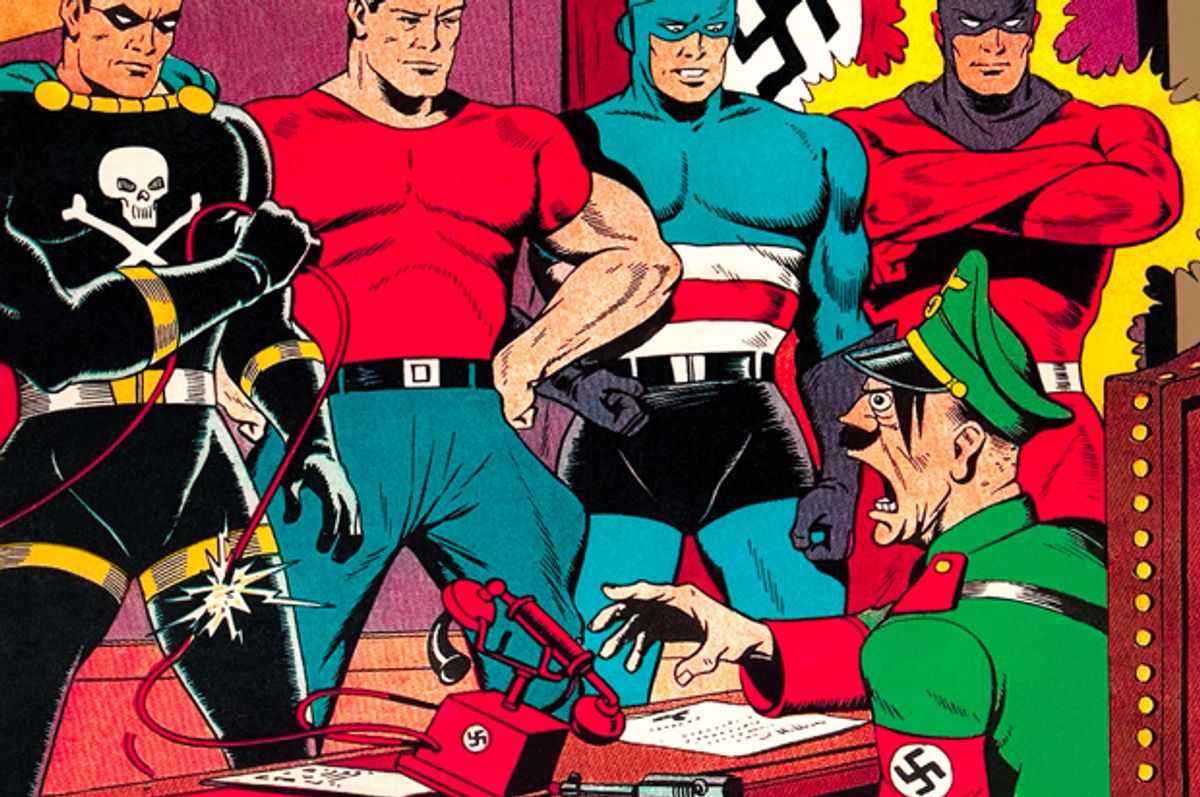 One of the most famous covers in comic book history is Captain America #1 — featuring Cap punching Hitler in the face, months before we entered World War II. Cap co-creators Joe Simon and Jack Kirby (who would have turned 100 this month) would both go on to serve in that war.

But Kirby and Simon’s classic cover was only the tip of the anti-fascism-berg. Though comics have long been known as a vehicle for escapism, during the 1940s dozens of creators and companies produced a slew of covers and stories aimed right at the head of Hitler and the other Axis Powers. Mark Fertig’s gorgeous book “Take That, Adolf!: The Fighting Comic Books Of The Second World War,” released in April, documents and analyzes over 500 of these covers. Given the infuriating events in and after Charlottesville, these images are no longer just a historical treasury. Anyone looking for inspiration in the fight against white hate can find plenty in these exuberant and defiant images.

Not many people would think of Hitler as a comic book villain, but as Fertig found, Hitler appeared on more covers than perennial villains the Red Skull or the Joker in the Golden Age of comics. Martin Goodman — a Jewish son of Russian immigrants and the publisher of Timely Comics, which would eventually become Marvel — was the prime mover behind the genre collected in “Take That, Adolf.” Goodman began, somewhat tentatively, with the December 1939 cover of Marvel Mystery Comics #2, featuring the Angel in battle with some fighter planes: their logos not-quite swastikas, but the meaning is clear.

Fertig describes how the comic book industry’s response to the Nazis and other Axis Powers grew from tentative (a 1940 issue of Daring Mystery Comics changed “Hitler” to “Hiller”) to overwhelming, with just about every character getting in on the fight. Following Timely’s lead, other publishers began launching war-centric covers, and soon just about every character was fighting Nazis or pushing war bonds, including Captain Marvel, Green Lantern, Donald Duck, the Justice Society, Superman, Batman and Robin, Bugs Bunny, Joe Palooka, and even Little Orphan Annie, in addition to lesser known characters such as the Blue Beetle, Captain Midnight, Super Rabbit, and Catman, who is strangling Hitler in a particularly vivid cover from 1943.

It’s no accident that comics became a powerful source of anti-Nazi propaganda: the heavily Jewish industry had more to fear than most from Hitler. In an email interview, Fertig spoke of the bravery and creativity of Jewish creators who not only took on the Nazis but transformed a fledgling industry into something significant. Fertig praised “all the Jewish kids . . . who were there at the beginning and transformed comic books from a momentary curiosity into a lasting cultural phenomenon. Will Eisner, Simon and Kirby, [Jerry] Siegel and [Joe] Shuster, Stan Lee, Gil Kane, Charles Biro, Bill Finger, Charlie Gaines, the list goes on and on . . . We were very much an isolationist country in those days; it took real guts to take on Hitler and the Nazis with America still so many months away from entering the war. If the writers, artists, editors, and publishers hadn’t been predominantly Jewish, eager to create heroes who could kick the stuffing out of arch-villain Hitler, comic books might have remained the province of funny animals, jungle queens, and he-man adventurers, and consequently faded away.”

Fertig records many delicious details that might surprise today’s comic fans: including the fact that Captain America was not the first patriotic superhero. He was preceded by the suspiciously similar Shield 14 months earlier. Post Captain America, the genre of patriotic heroes exploded, including V-Man, Captain Battle, Man of War, the Lone Warrior, the American Crusader, Major Victory, Mr. Liberty, Mr. Justice, Yankee Doodle Jones, plus the Flag and Flag-Man. Refreshingly, the fad of patriotic heroes wasn’t all fellas. Miss Victory, Miss America, Pat Patriot and the incredibly named War Nurse, who should have her own movie franchise. Wonder Woman was a patriotic hero too: the female Captain America in many ways.

But of course the forties weren’t some egalitarian paradise, and Fertig doesn’t gloss over the racism of the era, which he refers to as “overwhelming.” Some of these covers — in particular, ones depicting the Japanese as human-rat hybrids — are exactly what you would expect from a society that had internment camps. Fertig says, “Early on I realized that there was no honest or ethical way I could do this book without confronting the issue head on. The ugly irony of the World War II period comic book business is that while covers and stories preached to readers about the flaws inherent in the Nazi’s racist ideology, writers and artists continued to present African Americans as bumbling comic relief and Asians as fanged yellow monsters.” He adds, “I wish that the industry had done more to challenge the crude stereotypes — and there are a few isolated moments where creators tried — but in the end, we have to accept that wartime comic books did more to reinforce a racist zeitgeist than upend it.”

The racism of some covers is as disgusting as the anti-Nazism of others is inspiring: both aspects are, to put it mildly, relevant in 2017. Fertig didn’t intend this book to be anything more than a historical document and “celebration of art,” but it’s become something more in a country where white-power rallies are apparently becoming a regular thing.

We need all the anti-Nazi inspiration we can get, and Fertig thinks we can find plenty in these covers and the people behind them: “In late 1940, when Joe Simon and Jack Kirby created the first Captain America comic — the one with Cap landing a haymaker square on Hitler’s jaw — the hate mail and death threats rolled in. Members of the pro-Nazi German American Bund began to shadow the pair around Manhattan; eventually the police had to be called in. Those young idiots in Charlottesville with their tiki torches are nothing new in this country; people like them have always been with us. But back in 1941, when the Japanese invaded Pearl Harbor and America was drawn fully into the war, the nation galvanized around defeating Hitler and his cronies. The would-be Nazis in our midst crawled back under their rocks, but they didn’t vanish. This administration has given the bigots among us tacit approval to crawl out and spew their hate. It’s up to the rest of us to do something about it.”