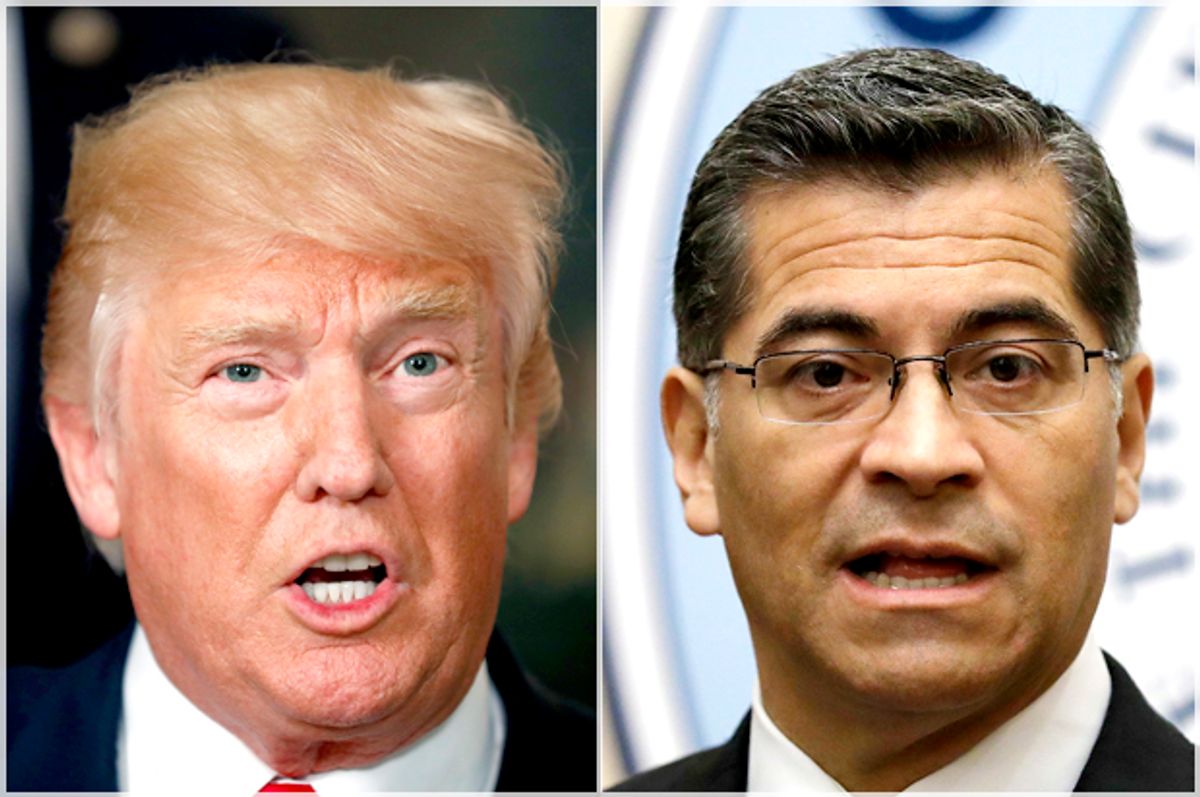 After Donald Trump's shocking meltdown on Tuesday afternoon, it's even clearer that progressives need effective strategies to blunt the effect of having a conspiracy-theory-driven, racist authoritarian in the Oval Office, backed by a congressional majority that is still too afraid to offer meaningful checks on his worst behavior. The good news is that some of the nation's biggest cities and states remain controlled by Democrats. Activists and politicians in those states are looking for meaningful ways to throw wrenches in the Trump agenda.

At the top of that list is California, which not only has the largest population of any state but is controlled by progressive Democrats (relatively speaking) who seem ready and eager to fight Trump, especially on the issues of climate change and immigration. (New York is the next biggest state controlled by Democrats, but intra-party warfare has crippled the ability of progressives to get much done.)

California fired a significant shot across the bow at Trump on Monday, when state Attorney General Xavier Becerra declared that the state would sue the Trump administration over threats to withdraw law enforcement grants if the local and state police refuse to cooperate with federal efforts to deport immigrants. The lawsuit will be joined with an earlier one filed by the city of San Francisco.

“The government’s plan for deporting millions of people in this country is to coerce local law enforcement to be their force-multipliers," explained Jennie Pasquarella, director of immigrants' rights for the ACLU of California.

Pasquarella noted that most deportations currently occur because of an encounter with local law enforcement. By resisting pressure to step up efforts to persecute undocumented immigrants, she said, California can make it safe for people to "access basic services that are vital to our state and communities without fear of deportation, like schools and hospitals and libraries and health clinics.”

Some Democrats in the state are trying to take this idea even further, backing SB 54, titled the California Values Act. According to The Los Angeles Times, the bill would prohibit "state and local law enforcement agencies, including school police and security departments, from using resources to investigate, interrogate, detain, detect or arrest people for immigration enforcement purposes."

While SB 54 is still being worked over in the legislature, California has already made progress in resisting the Trump administration's efforts to repeal Obama-era actions to fight climate change. In July, Gov. Jerry Brown signed a bill extending a cap-and-trade program to reduce carbon emissions until 2030. The bill passed by a two-thirds majority in both the State Assembly and Senate.

Many environmentalist groups have come out against the bill, arguing that it doesn't go far enough. Still, compared to the federal government's evident retreat, it's progress in the right direction. California has the largest state economy in the country, and demonstrating that climate action does not have to undermine economic growth could go a long way towards convincing other states to take similar action. This, in turn, could help the country meet the goals set by the Paris Accords, defying Trump's efforts to pull the United States out of the historic climate change agreement.

This strategy to resist right-wing policies and protect California residents predates Trump, to be clear. While much of the country was experiencing an unprecedented rollback of reproductive rights — with numerous red states passing alarming new abortion restrictions while anti-choice activists fought insurance coverage of contraception in the courts — California moved to make birth control and abortion easier and safer to get.

In 2013, responding to research showing that abortions provided by nurse practitioners and midwives are safe, Brown signed a law giving those groups authority to offer abortion services. Brown has also signed off on three provisions to make it easier for women to get birth control: Letting pharmacists dispense it without a doctor's prescription, requiring that health care plans cover contraception without a co-pay, and allowing women to get a full year's worth of birth-control pills at a time.

These policies were already in place before Trump's election, but they are all the more necessary now that the president is backing conservative efforts to make contraception more expensive and harder to get. It has also helped create a model for progressive cities and states to resist reactionary policies pushed by the federal government, which is already inspiring Democrats in other states. Chicago, for instance, is also suing the federal government over the threat to sanctuary cities.

There's a deep philosophical irony here, because for decades now conservatives have claimed they wanted to reduce the power of the federal government and hand more decision-making authority to the states. That was always a disingenuous pose, of course. This conservative "principle" was largely invented to justify state resistance to Supreme Court decisions and federal legislation legalizing abortion, desegregating schools and protecting voting rights.

Still, it's nice to see states like California calling the Republican bluff and showing that their supposed devotion to "small government" dries up the second states and cities move to protect human rights, instead of to attack them. Trump's attorney general, Jeff Sessions, has always held himself out to be a small-government conservative, for instance. But his reaction to state and local officials who claim the power to set law enforcement priorities for themselves has been to accuse those officials of being law-breakers. This hypocrisy is already obvious, and it may soon be exposed in court.