I'd rather drive on Highway McHighwayface than another Jefferson Davis Highway

Alexandria, Virginia is considering renaming a highway to sound less secessionist-y. Go for it 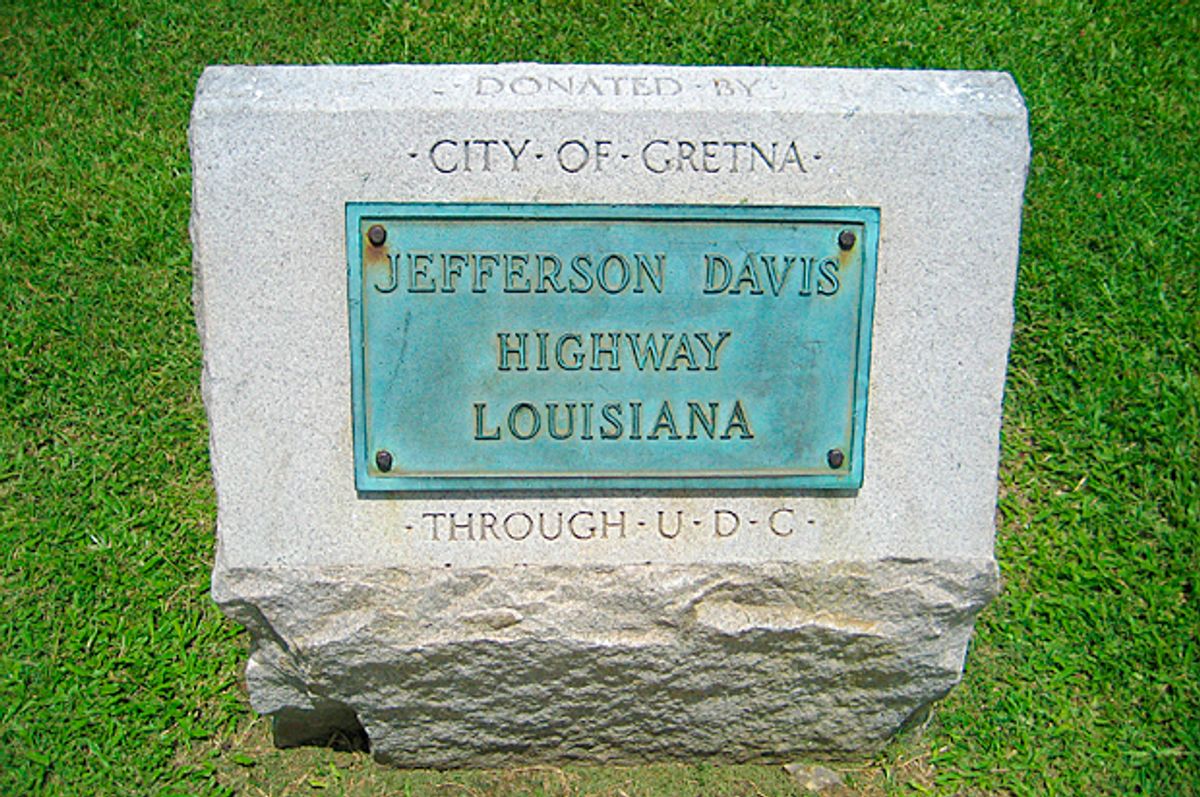 The city council of Alexandria, Virginia is asking the public whether Jefferson Davis Highway should be renamed. The move comes a year after the city council approved a measure to rename the route that connects the city to the outskirts of Washington, D.C.

The council has set up a survey page to seek feedback about removing this roadway memorial to a loser Confederacy president and his treasonous effort to break up the country. Since the naming is being left open to the internet, there are likely to be lots of ridiculous suggestions. And then there will be nasty emails. And there, somewhere in amongst the refuse, will be the future name of the road, also currently Route 1 — which is, itself, a perfectly good name for a roadway.

But defenders of Southern pride and history: Relax. Virginia is absolutely packed with monuments, roads, avenues and neighborhood streets honoring your beloved heroes.

You can buy a house on one of dozens and dozens of streets, boulevards or avenues named after slavery-defending Confederate Gen. Pierre Gustave Toutant-Beauregard. There are highways, streets, roads and drives honoring Southern politician John C. Calhoun, Confederate cavalry commander John Singleton Mosby, Confederate Maj. Gen. George Edward Pickett, and other figures once willing to destroy the nation in order to defend the right of whites to own black people and profit from their unpaid labor. (A very complete list of these routes can be found over at Al Jazeera.)

According to the Southern Poverty law Center, Virginia also hosts 223 monuments to the Confederacy.

In addition to statues and memorial parks, there’s the Confederate Memorial at Arlington National Cemetery and the Confederate Monument in Portsmouth, which is on the National Register of Historic Places — good luck taking those down. And then, of course, there’s Washington and Lee University in Lexington, named after the first U.S. president and Gen. Robert E. Lee, who served as president of the university after the Civil War.

Even if Alexandria officials rename the highway, fans of the slave-defending president can be comforted in knowing that there are still a lot of Jefferson Davis Memorial Highways out there, sections of which run through 11 states.

According to the Federal Highway Administration, private organizations or individuals played key roles in determining route names in the early years of national roadway expansions.

In 1913, the United Daughters of the Confederacy proposed the Jefferson Davis Memorial Highway to run contiguously from Arlington, Virginia, to San Diego. At the same time, Indiana entrepreneur Carl Fisher was pushing his proposal to establish the Lincoln Highway from Manhattan’s Times Square to downtown San Francisco. Portions of both routes still exist today.

So, internet, name this road whatever you want. Because it's bound to be an improvement.