The humans versus the machines: Broadcast and cable face the Silicon Valley invasion 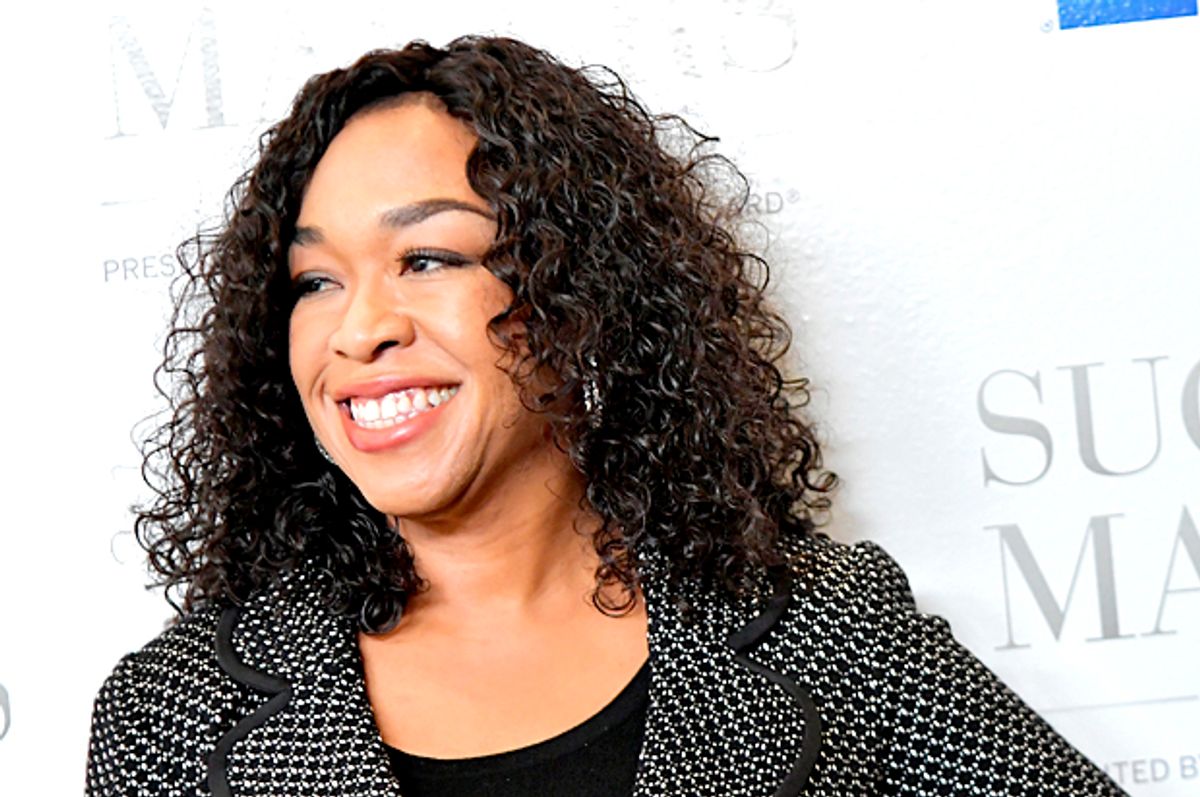 “I want the humans to be able to hold their own against the emerging strength of the machines.”

You can be forgiven for wondering if that line was lifted from an early version of “The Matrix” or one of the chapters in the “Terminator” franchise. Actually, the quote’s source is very much grounded in our reality and was referring to the state of culture and a looming shift in media consumption as we know it. FX CEO John Landgraf said it at a press conference in Los Angeles last Wednesday in reference to Silicon Valley’s invasion of the entertainment industry.

Landgraf’s executive presentations have become a Press Tour tradition, anchored by fascinating yet sobering data dumps. A past presentation birthed the term Peak TV, as Landgraf confirmed what people who write about TV already know, that there are simply too many series premieres in a given year for a sane and healthy human being to keep up with.

In case you’re curious, as of a week ago, 342 scripted series have debuted this year across all of broadcast, cable and streaming video on demand. At this time last year, 325 series had premiered.

These press conferences have led to one reporter nicknaming Landgraf the Mayor of Television. But his most recent address proved him to also be something of a sociologist and one of the industry’s more reliable Cassandras. At the heart of it was a prediction that Netflix, Amazon and eventually Apple will crumble the television industry structure as we know it.

“There’s ample evidence to demonstrate that Silicon Valley’s model is a winner take all or winner take most or a monopoly, duopoly structure,” Landgraf said. “. . . It’s about being able to bring billions upon billions of dollars even at loss to bear on conquering markets. And I think that’s a very stiff headwind, I would say, for anybody who’s not in Silicon Valley and not on that side of that business model.”

Later in the press conference he told the assembled journalists, “By the way, wait for the epic titanic battle for talent that’s coming. It’s a good time to be talent because there’s a lot of money coming your way, right?”

Proving the truth of that statement didn’t take long. On Sunday Netflix announced it has lured Shonda Rhimes and her production company Shondaland away from ABC Studios, where she created hits such as “Grey’s Anatomy,” “How to Get Away with Murder” and “Scandal” for the broadcast network over the past 15 years.

“Ted [Sarandos] provides a clear, fearless space for creators at Netflix," Rhimes said in a Netflix press release outlining her new partnership with the company and its chief content officer. "He understood what I was looking for — the opportunity to build a vibrant new storytelling home for writers with the unique creative freedom and instantaneous global reach provided by Netflix’s singular sense of innovation."

Rhimes also stated she’ll continue to be involved in the production of her existing series, including steering “Scandal” through its final season. Not disclosed was how much this deal was worth, although Netflix has a reputation for offering significantly higher salaries than other networks and studios. Reports indicate that ABC paid Rhimes around $10 million per year.

Prior to that, “The Walking Dead” creator Robert Kirkman jumped from AMC's ship to make a two-year overall deal with Amazon. Even as Landgraf spoke to reporters, news broke that Joel and Ethan Coen’s first series, a Western anthology titled “The Ballad of Buster Scruggs,” would debut on Netflix. (There was another whimper amidst all this bang: NBCUniversal’s comedy streaming service SeeSo, which launched in 2016, announced it would shut down later this year.)

In years past the only places established directors would have deigned to roll out their products would have been HBO or AMC or, yes, FX. These channels remain top pitch destinations, but as they and their broadcasting cohorts are quickly learning, legacy broadcasters simply don’t have the budgets or the global pervasiveness to compete on an equal playing field with tech's mountains of cash.

Netflix expects to spend $6 billion on content in 2017. In the company’s second quarter letter to investors, executives stated that it will burn through $2 and $2.5 billion in free cash flow this year alone — a number dwarfed by the headline-grabber that the company is carrying $20.54 billion in long-term debt in its quest to crank out more original content.

This is why Landgraf is saying, “I’m raising my hand on behalf of not only me and my team at FX but, frankly, HBO and AMC and many others who are saying, you know, we think there’s value in the curation we bring.”

Strange, how quaint and noble that sounds.

Knowing that that FX, HBO and AMC spend more money in the creation and promotion of a single series than most human beings will see in a lifetime may not earn much sympathy from consumers tired of paying exorbitant monthly cable bills. But there is an aspect to Landgraf’s argument to which the average viewer, and citizen, would be wise to pay attention.

Landgraf connected the rising power of tech over legacy TV brands to four decades of market deregulation that affects every sector, including entertainment, politics and economics. That may be an odd connection for to him to make, but the common link is consumer innovation pricing.

“Why would investors extend seemingly infinite lines of credit to businesses which lose money while simultaneously devaluing businesses that are profitable?” he asked. “The answer, those investors must believe the government has lost its ability or will to regulate monopolies, and therefore, the key determinate of a business’s current value is its progress towards achieving an unassailable dominant future position, even if there are current losses rather than profits.”

In layman's terms, Silicon Valley can take over entertainment by smothering consumers and competitors in options. Their options.

As a reminder, last year’s final count of scripted debuts was 455, which felt mindboggling at the time. But Landgraf conservatively predicts that by the close of 2017 more than 500 series will have premiered. Streaming debuts make up the majority of that number.

The FX CEO broke it down thusly: According to FX data, 79 additional series have been announced by various SVOD services that haven’t aired yet. He was careful to add the caveat that a number of these series may never debut — such is the way of the TV industry — but if all of them do, some 141 series will bow in 2017 solely on in the Netflixes, Amazons and Hulus of the world, bringing the grand total in the ballpark of 534 series.

And this does not account for any announcements Apple is expected to make.

“Even beyond television . . .we are all watching an epic battle unfold for who will control human attention, which is both a finite resource and the most economically valuable commodity on Earth, because who controls your attention controls the ability to monetize that attention,” Landgraf said. “This is the root of the battle between Walmart and Amazon, between Facebook and Google and Apple, between Instagram and Snapchat, between Netflix and Amazon and the legacy television brands.”

Landgraf began sharing these data-driven scripted series tabulations a few years ago, predicting in 2015 that the count would continue to rise until at least 2019. However, that was before Netflix ramped up its release schedule, flooding the zone with original series premiering on what feels like a weekly basis. Amazon has been slower to build its stable of originals, but it, too, has increased output. (It can also mitigate its financial losses with revenue generated from across other sectors of the company.) Even Hulu has stepped up to meet the challenge posed by its competition.

As I wrote a few weeks ago, more does not necessarily translate to better. Netflix has a lot of good series and only a smattering of great ones, consistent with the track records of standard broadcast and cable channels. The service also nabbed 91 nominations Emmy nominations in July.

For Netflix, inundating the market appears to be paying off. But when a stream swells into an ocean, finding and cultivating the pearls lurking in its content bed becomes an increasingly difficult task for consumers. And some of the series promoted as gems were not highly valued in the marketplace, an example being the lethargic “Gypsy,” starring Naomi Watts, which arrived with great fanfare and was canceled with much snickering.

It’s worth pointing out that Landgraf’s speech came at the beginning of a day spent promoting his channel’s programming, which included panels for the FXX comedy “You’re the Worst” and the upcoming season of Pamela Adlon’s “Better Things,” as well as panels for a number of projects due later in the season helmed by Ryan Murphy.

Each of these titles and producers prove FX and its cable brethren still have pull in the television marketplace, as one of the first basic cable channels to make a point of nurturing prestige content such as “The Shield.” FX, along with AMC and more recently TNT (whose top executive Kevin Reilly used to have Landgraf’s job), has built a reputation as a brand driven by creative personalities such as “Atlanta” creator Donald Glover; Louis C.K., who co-created “Better Things” with Adlon; and Murphy, who has numerous projects in place on FX and its broadcast sibling Fox. The contented ones, to a person, cite their willingness to take less money for the ability to make their shows with little interference.

Essentially this is the currency Landgraf and channel executives can offer to content creators to counterbalance the large checks Sarandos or Amazon’s head of originals Roy Price can cut — that, and the assurance that their work will be easily discoverable.

For the moment, the tech giant companies appear to be much more likely to nab the Shonda Rhimeses, Robert Kirkmans and Louis C.K.s of the world than offer a chance to lesser known talents  on the level of  “You’re the Worst” creator Stephen Falk or start-up talents as Rob McElhenney, who was a relative unknown when he and Glenn Howerton developed “It’s Always Sunny in Philadelphia.”

“If you’re an artist and you don’t want to work with one company, you pick up your briefcase, you go down the road . . . and you go work for another company,” Landgraf said. “There have also always been 10, 12, 15 midsized companies. I’m not saying that Disney or FOX wouldn’t take over the world if it could, but it’s just been a system like maybe a sports franchise, where no one team could take over the world and win every time. I don’t want to see that outcome in entertainment.”

But Landgraf and his ilk aren’t fools. In addition to his state of television chat, he also announced the roll out of FX’s own streaming-on-demand product FX+, which joins CBS All Access and standalone premium packages such as HBO Now and Showtime Anytime. Disney also recently stated that it is dissolving its relationship with Netflix in 2019 to launch its own streaming product, a move that partly explains why Netflix is so keen to quickly deepen its bench of originals. As its reach expands, fewer entertainment companies may choose to license their programs and films to Netflix because it strengthens its consumer value.