It's no surprise that a traitor would defend traitors 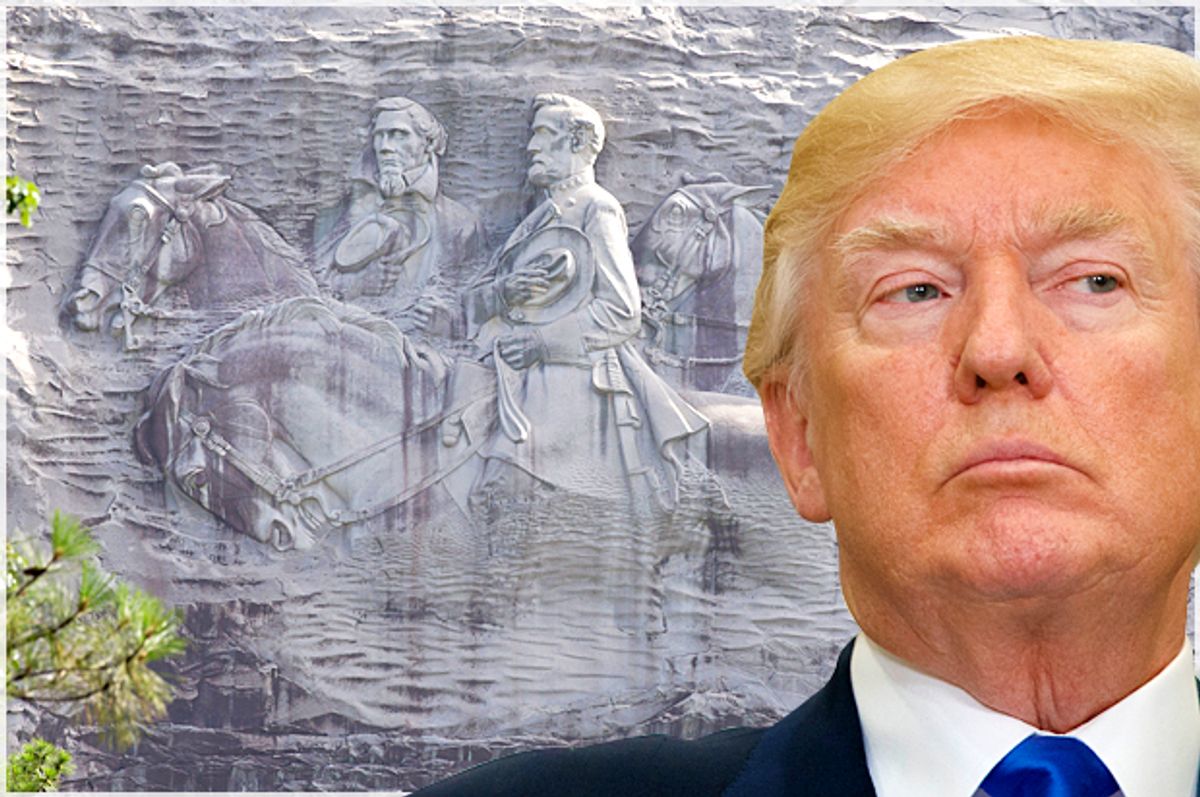 There’s something poetic about President Donald Trump defending the treasonous generals who fought for the Confederate States of America. Considering how Trump allegedly conspired with a hostile foreign regime to hijack the 2016 election, we’re essentially observing a traitor defending traitors. If any president knows what it means to conspire to subvert American democracy, it’s Donald Trump.

...the beauty that is being taken out of our cities, towns and parks will be greatly missed and never able to be comparably replaced!

It’s informative to know that our current president believes the only features that successfully beautify our parks and public spaces are the apparently incomparable statues of Confederate generals. Also, I’d wager Trump knows next to nothing about either Jackson or Lee, not to mention other A-list Confederates such as P.G.T. Beauregard, James Longstreet, A.P. Hill or any of the other secessionists he’s defending.

Trump has illustrated with shocking clarity how important it is for Americans to learn the whole story -- the true story -- of the American Civil War, a story that absolutely includes a lengthy discussion of rebel soldiers from the ranks on up. While many Confederate infantrymen had their pet reasons for fighting, make no mistake: the defining goal of secession and firing upon Fort Sumter was to defend the perceived rights of the Southern states to retain slave labor as the driver of its economy. But it’s a toxic storm of racism and the absence of education about factors and motives of this harrowing chapter of American history that’s led us to this tragically frustrating time and place in which the sitting president is actively flacking for Nazis, white supremacists, KKK members and, yes, Confederates.

Trump doesn’t understand that his concept of the Civil War is mostly based on Lost Cause myths that arose during the post-Reconstruction era as a means of socially reunifying the North and the South. Trump doesn’t understand that politicians, writers and even turn of the century silent films engaged in a pernicious whitewashing of the old Confederacy, while nefariously targeting recently-freed African-Americans as a common enemy -- an easy-to-spot population of falsely stereotyped villains, rapists and thieves who Northern and Southern whites could mutually demonize. Blacks and racial equality, the Lost Cause suggested, were the true culprits behind the bloodiest war in American history. Given the existence of blinding racism in both the North and the South, it wasn’t a very difficult fiction to propagandize. Consequently, the Lost Cause triggered nationwide support for Jim Crow laws, the KKK, lynch mobs, neo-slavery, the GOP’s Southern Strategy and, eventually, targeted voter ID laws and voter suppression efforts of the modern era.

Trump doesn’t understand that Confederate traitors responsible for defending slavery to the tune of hundreds of thousands of Union dead were rebranded to become what Shelby Foote called “marble men.” According to the Lost Cause, these bronzed underdogs barely fell short of achieving their allegedly noble and ultimately unquenchable thirst for independence, freedom and states’ rights. Sadly, as you’ve probably seen in your Twitter feed, this “states’ rights” nonsense endures today, as does the deification of traitors, re-written as flawed but redeemable American heroes. In fact, Confederate commanders weren’t any more patriotic than criminals like Timothy McVeigh or Ft. Hood shooter Nidal Hasan, each of whom notoriously took up arms against the federal government.

Trump doesn’t understand that these statues he suddenly claims to love so much are actually memorials to a myth -- definitely not actual Southern heritage.

Trump doesn’t understand that KKK members, white supremacists and American Nazis actively market in the Lost Cause myths that Trump also seems to accept as true history. By refusing to single out and condemn these groups, he’s knowingly building a political movement on racial oppression and white hegemony. Come to think of it, it’s entirely possible that I’m wrong about Trump’s level of education about the Civil War and its 150 year aftermath. It could be that Trump knows what his rally-going cult followers like to hear and so he’s deliberately and knowingly misrepresenting history in order to pander to his base.

While Trump’s base isn’t entirely populated with Nazis or Klan members, there are certainly more than a few Trump voters who, while they’re not wearing the silly uniforms or marching with tiki torches, subconsciously or overtly agree that white power is intrinsic to resurrecting their long sought 1950s utopia. Frankly, I’m more inclined to believe Trump doesn’t know anything about the racial history of America or the Civil War. He simply knows which Southern Strategy buttons to push and, unlike his GOP predecessors, he’s dispensing with the dog-whistles while barely stopping short of blurting the n-word, or worse.

One thing we know for certain, there will never be a marble or bronze statue of Donald Trump. At least, not one that’ll remain standing for very long. For all of Robert E. Lee’s flaws and for all of Stonewall Jackson’s eccentricities, at least they looked their enemies in the eye, unlike Trump who runs away from tough questions while hiding behind his pathological duplicity and the warm glow of his Twitter feed. At least Lee and Jackson were educated men who understood history and the high stakes of their secessionist enterprise. But they were still criminals against the Constitution and oppressors of an entire race on this continent. This last point is sadly lost on Trump.

The president has stupidly chosen to defend -- both tacitly and explicitly -- America’s enemies in three major wars: the South in the Civil War, Nazis in World War II and the Russians in the Cold War. The party of Lincoln, Eisenhower and Reagan is being consumed by Trump’s despotism and his amoral leadership on multiple fronts. And he simply doesn’t care. As long as his white loyalists are sated, he believes he’s on the right track. He’s believing wrongly.