"Wolf Warrior 2," China's answer to "Rambo," is a map of the nation's future 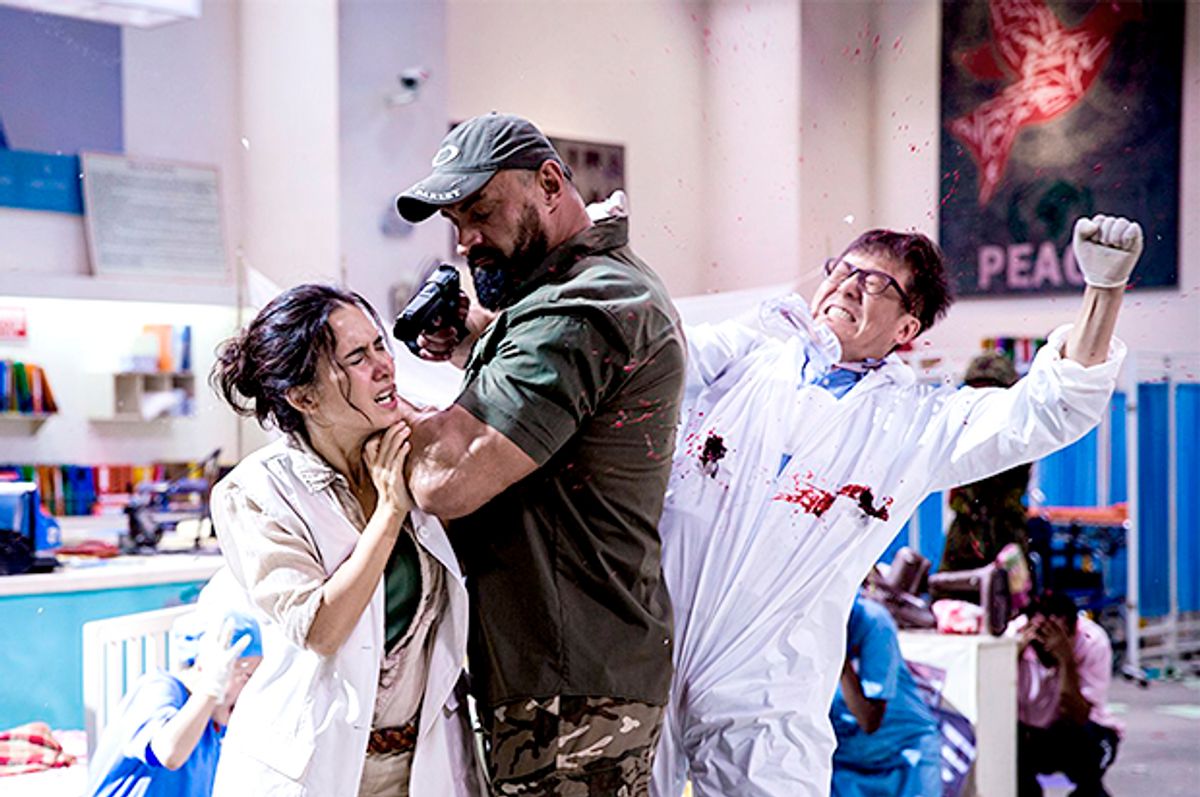 A lean, muscular man with hard eyes dives from a ship's deck into the waves. He swims beneath the surface towards a dinghy of bazooka-wielding African pirates, bullets cutting through the water all around him. After he capsizes the boat, an underwater kung fu sequence on par with anything ever offered by Keanu Reeves or Jet Li unfolds.

The hero emerges from the water, assumes control of empty vessel, picks up a sniper rifle, aims and — just as the second group of baddies is about to launch a rocket — shoots the attacker between the eyes from nearly a mile away.

The film, "Wolf Warrior 2," has all the trappings of a big-budget Hollywood action franchise — but the writer, director and star is the Beijing-born Wu Jing, and the main language spoken in its 121-minute runtime is Mandarin. Since his debut in the 1996 Hong Kong film "Tai Chi Boxer," Wu has become a familiar face in Chinese theaters, starring in hits with superstars like Jackie Chan and Jet Li.

To date, "Wolf Warrior 2" has earned nearly 5 billion yuan (USD $720 million), making it the all-time #1 at the Chinese box office. Close behind in second place is "The Mermaid" (a Chinese-made fantasy/romance about a millionaire playboy whose mermaid assassin falls in love with him). The Western made "The Fate of the Furious" comes in third.

Those numbers also land it at third-highest of all time for earnings in a single market, just ahead of "Jurassic World" and "Titanic." It also makes the bloody, action romp the only not-from-Hollywood entry in the list of the top 100 box-office earners in history. Oh, and "Wolf Warrior 2" actually made more money in its second weekend than it did on its first.

Hopes for the film were high, but this level of success was unexpected. The original "Wolf Warrior" earned a mere $89 million in 2015. As well, younger Chinese audiences tend to view features such as this as corny, Western wannabes, often preferring Hollywood fare over such homemade properties. "The Founding of an Army," another film released this month detailing the origin of China’s People’s Liberation Army, for instance, opened to poor reviews and weak audiences. Yet, it appears that if the action sequences and special effects are just as good as anything Hollywood churns out — "Wolf Warrior 2'"s are — this may cease to be the case.

This movie knows how to have fun. Wu crashes a Humvee into a wall, dives through a glass window onto an enemy's back and screeches around corners in a battle tank as if it were a Mario-Kart buggy -- and he looks good doing it, something that certainly hasn’t always been the case with Chinese-made movies (it probably helps that the film mostly eschews CGI).

When a movie has all that and more, who minds if it’s government propaganda? Indeed, "Wolf Warrior 2" wears its nationalism on its sleeve. At times, this film makes "Rocky III" look subtle.

And while American cinema is no stranger to jingoistic themes and the support of the U.S. military, the involvement of the Party leadership and the PLA is at another level in the People's Republic. Leadership gets full approval of scripts, ensuring that each film carries the government line. Indeed, "Wolf Warrior 2" can be viewed as a vetted, specific statement from the upper echelons of the men who run China.

The film is (very loosely) inspired by the PLA's evacuation of Chinese citizens in Yemen in 2015, and the timing couldn't be better. "Wolf Warrior 2" comes hot on the heels of the opening of China's first overseas naval base in Djibouti in July and shortly after the announcement of the massive "One Belt, One Road" soft power/infrastructure plan that will make an even deeper investment in African nations.

Time and again, the theme of China's friendship with Africa is hammered home in "Wolf Warrior 2," despite a few notably tone-deaf lines. At one point, a veteran PLA soldier remarks, "Africa! Beautiful country, great food, and hot women. But when they get around a campfire, they just can't help it — they have to dance!"

Elsewhere, the West is up for sharp criticism. When Wu's romantic interest (Hong Kong-American actress Celina Jade) suggests going to the American embassy for help, the hero scoffs. "You think the American Marines are the best in the world?" Wu Jing asks. She nods yes. He too nods in what may be a grudging assent, then smirks. "That may be . . . but where are they now?" The film's answer is clear: not in Africa.

"Wolf Warrior 2" is keen to show the hero rescuing innumerable Africans from slaughter (which he does by mowing down literally hundreds of other Africans, producing a body count that approaches anything in Schwarzenegger's filmography). Chinese administrators run hospitals. A Chinese doctor creates a vaccine for a disease that is ravaging the continent. Again and again the film rams home the message that China is stepping up to help, where America is nowhere to be found. (It's a message that would likely sit just fine with the isolationist-leaning policies of the Trump administration.)

The movie also serves as a showcase for the People's Liberation Army and China's growing naval power. The final battle between Wu Jing’s protagonist, Leng Feng (a former 'Wolf Warrior,' or PLA special ops soldier) and the cigar-chomping, scotch-swilling American (played by Frank Grillo, better known as Captain America's nemesis, Crossbones) hinges on the mercenaries being wiped out in an awesome display of precision cruise missiles launched from the decks of a fleet of Chinese destroyers. It's easy to imagine the movie's military consultants thinking of their territorial claims in the South China Sea.

Grillo’s "Big Daddy" taunts Jing as he drives a knife ever closer to his jugular. "Get used to it . . . people like me will always be better than people like you." The implication is obvious — the Western world will always be superior. At the last moment, Wu Jing turns the tables on the greedy, Blackwater-esque Yank, slashing his throat and smashing his face into hamburger. "That's fucking history," Jing says to the body of his fallen foe. Translation: the Opium War was a long time ago, buddy, and China is done being pushed around.

The Party message here appears to be two-fold: not only can China supplant the U.S. as a superpower and global leader, but it can also crank out equally entertaining shoot-em-up feature films. And with the government’s control over the entertainment industry, it can tailor their pop-culture to dovetail with its strategic goals in a way few nations can. (In a recent speech noted for its aggressive tone, Chinese President Xi Jinping even came very close to the wording of the film's aggressive tagline: "Anyone who offends China will be hunted down, no matter how far the target is.")

The message seems to be resonating, and although we’ve been hearing about "rising Chinese nationalism" for years, that the country is experiencing a surge in collective pride is undeniable (something it has in common with the USA and the UK, its fellow permanent members of the UN Security Council.)

So, as much as "Wolf Warrior 2" owes its success to being a lot of fun to watch, it is just as much dependent on an accurate gauging of the national zeitgeist. Wu noted himself in a recent interview that "this wasn’t my personal achievement, but . . .  an explosion of patriotism among all Chinese people." In this fictional African country of "Wolf Warrior 2," images of the crimson Chinese flag majestically waving over the 'dark continent' are never far away. Another installment in the franchise was promised in the film's post-credits sequence.

Out of the limelight at the Marina City theater in Qingdao (a medium-sized Chinese metropolis with a modest population of over 6 million), the crowd whooped with approval as the credits of "Wolf Warrior 2" rolled. "That was inspiring," said a young Chinese man, getting up to exit the theater. "Makes me feel proud, you know?"