How legitimate is the annulment shocker that "Game of Thrones" tossed at us? 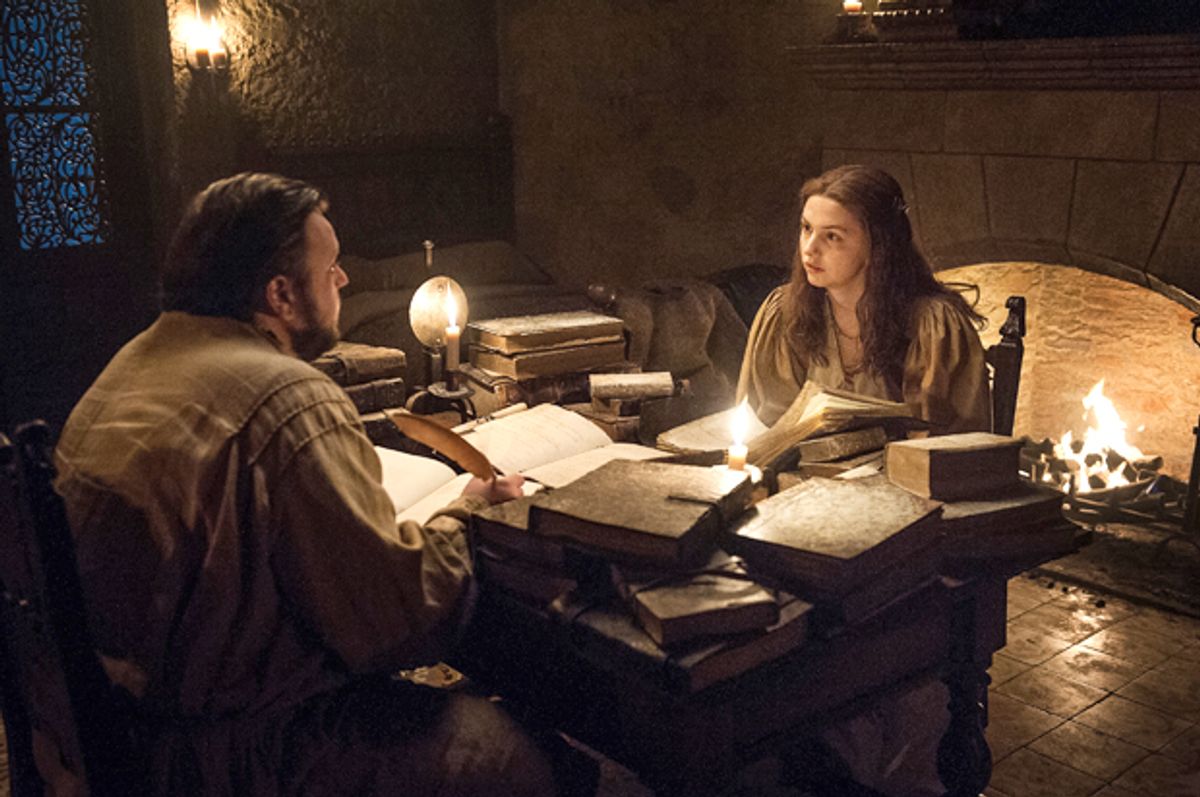 Although “Game of Thrones” follows the exploits of men and women heralding from the great houses of the Seven Kingdoms, HBO’s series and George R.R. Martin’s books leave some of the most important work to the smallfolk. Scraggly orphans light the wildfire that puts Cersei on the Iron Throne. Criminals and disgraced nobles hold The Wall in the North.

And in the season 7 episode titled “Eastwatch,” a barely literate Wildling woman sputters through a question and drops a bombshell. While examining an ancient page in the far-too-explicit journal of a high septon named Maynard, Gilly asks her partner Samwell Tarly, “What does . . .  ”an-nul-ment” mean?”

Annulment, Sam explains simply, is when a man sets aside his lawful wife. Gilly keeps reading: “Maynard says here that he issued an annulment for Prince Raggar and remarried him to someone else at the same time, in a secret ceremony in Dorne. Is that a common thing in the South?”

Now that we’re chest-deep into the seventh season, the “Game of Thrones” narrative and life in Westeros itself has sped up substantially. In “Eastward” Jon Snow and Ser Davos Seaworth zipped by boat from Dragonstone to the Wall with the speed of a commuter jet. Previously Ser Jorah Mormont went from scaly, diseased and dying to fighting and fit within what appeared to be days.

Thus the appearance of the term “annulment” leads one to question whether executive producers D.B. Weiss and David Benioff are activating a plausible, historically accurate loophole Martin intends to use in future “A Song of Ice and Fire” novels, or employing the concept as a matter of plotting convenience. It's probably a bit of both.

But we did wonder whether the concept of annulment really was common, as Gilly asks, in the historic eras from which Martin borrows.

According to Robert Rouse, a professor at the University of British Columbia, absolutely. “Especially among the aristocracy,” he said in an interview with Salon. “And one of the reasons was the institution of political marriage. Marriages were formed to cement alliances. Then alliances changed, so sometimes it became politically expedient to put one wife aside and to take another.”

Northern Illinois University history professor Valerie Garver, however, makes a qualification. “It kind of depends on what one says is the main time [Martin] is drawing from. Because it's kind of a historical and cultural pastiche, right?

Martin draws inspiration from the histories and lore of a number of countries, cultures and eras in his stories, but the author previously confirmed that his primary model is the Wars of the Roses, England’s 15th-century, three decades-long battle for supremacy between ruling dynasties. Garver pointed out, “There certainly was annulment by the late Middle Ages.”

One famous annulment case Rouse cited is that of Edward IV, Richard III's brother, accused of being married before he wedded Elizabeth Woodville. This was used by Richard to delegitimize all of Edward and Elizabeth's children later on, Rouse said.

Another is Eleanor of Aquitaine, the wife of Henry II of England, who had been married previously to Louis VII of France. “Their marriage was annulled in 1152 so that she could be free to go off and marry Henry II,” Rouse explained, “So this kind of thing did happen quite often among aristocratic and even royal circles.”

Rouse and Garver are experts in the figurative intersections between our world and Westeros, by the way, each having taught “Game of Thrones”-themed courses at their respective universities. Rouse’s 2016 class “Our Modern Medieval: The Song of Ice and Fire as Contemporary Medievalism" grew out of student interest in representations of the medieval era in modern times.

Prior to the HBO series’ fifth season in 2015, Garver co-created a course called "'Game of Thrones,' Television and Medieval History,” which covered everything from the value of literary-inspired television and the historical parallels seen in the series to the show’s representations of gender and sexuality.

In our reality, annulment is a legal term that differs from divorce in that it invalidates a marriage entirely, treating it as if it never existed.

While the series has yet to bring up the concept of divorce in the Seven Kingdoms, Gilly’s stumbling upon the concept of annulment is extraordinarily vital. “Raggar,” as Gilly mispronounced, likely refers to Prince Rhaegar Targaryen, the eldest son of Aerys Targaryen the Second, also known as the Mad King, and Daenerys’ older brother. Rhaegar was married to the Dornish princess Elia Martell, with whom he had two children.

According to Westeros history as presented in the series (the books' plot differs in several key aspects), Rhaegar kidnapped and raped Lyanna Stark. This sparked Robert's Rebellion, since Lyanna was promised to Robert Baratheon. Robert and Ned Stark later find Lyanna in Dorne’s Tower of Joy, seen in the series through one of Bran Stark’s visions. As Lyanna lays dying, she makes Ned swear to uphold an unspecified promise as the nurses bring forth an infant inferred to be Jon Snow.

Before Gilly’s literacy exercise, the presumption was that Jon Snow is a bastard — Rhaegar’s bastard, not Ned Stark’s, as was (and among the people of the North, is) commonly believed. But if Rhaegar annulled his marriage to Elia and married Lyanna, this means Jon Snow may have a stronger claim to the throne than Dany since he is Rhaegar’s only living and legitimate heir.

“My guess is that they're using the word annulment because . . . divorce is now such a common concept,” Garver said. “People are very used to it. An annulment sounds like something from the past. But I also think they're doing it, and I assume that Martin in the books is doing it, because it fits with a culture where you're arguing that a religious institution has power over marriage.”

Another interesting detail about the historic employment of annulments goes against the Targaryen practice of interfamilial unions. “The church in Medieval Europe had a standard, which was known as seven degrees of consanguinity,” Rouse explained. “You couldn't marry someone who was related to you within seven degrees, going back seven generations. That was the theory."

“But of course, everyone was so related in the aristocratic circles, in the noble families, that it was quite difficult to find someone who was not related to you within seven generations,” Rouse added. “And so the church would often give kind of dispensations of marrying within the seven degrees of similarity or consanguinity. And then this was often used to get a divorce, or an annulment, more correctly, later on.”

“I'm not so sure they've made it incredibly clear in the show, but I think it's quite clear in the book that marriage is regulated in Westeros to some degree by the septons and all that,” Garver said. “It's the high septon who can annul the marriage.”

Considering all of that, is the incorporation of the term “annulment” simply a bit of juris ex machina, designed to inspire lengthy cogitations like the one you’re reading right now? Sure. Why not? You’ve read this far.

But Garver also believes the annulment detail serves a more important purpose. “I've always suspected that there was going to have to be some way to prove Jon Snow's parentage and to explain it,” she said.  “Because at this point, it would appear that with one exception [Howland Reed] everyone who would definitely know is probably dead. It’s kind of interesting to have it be a textual proof that comes into play. I can't help but think that is its purpose. How on earth would Jon Snow prove this, even if Bran tells him, ‘Oh in my vision I saw it’? Having this textual confirmation could be really useful.”

Garver adds, “I quite like the fact that Gilly and Sam don't get why it's important, both for very different reasons. That's very typical of people reading historical documents.  A lot of times we read them and then we think, oh there wasn't really anything there and then later, when you have either more context or you're looking or thinking in a different way, you can re-read the same thing and suddenly you realize its importance.”

Now we’re left to patiently wait until Sam, Gilly, Jon, Dany and everyone else in Westeros is brought up to speed, potentially changing the game.