One more lesson from Charlottesville: Our comedians are more ethical than our president

How did we get to a point where late night comedians have a better moral compass than our nation’s leaders? 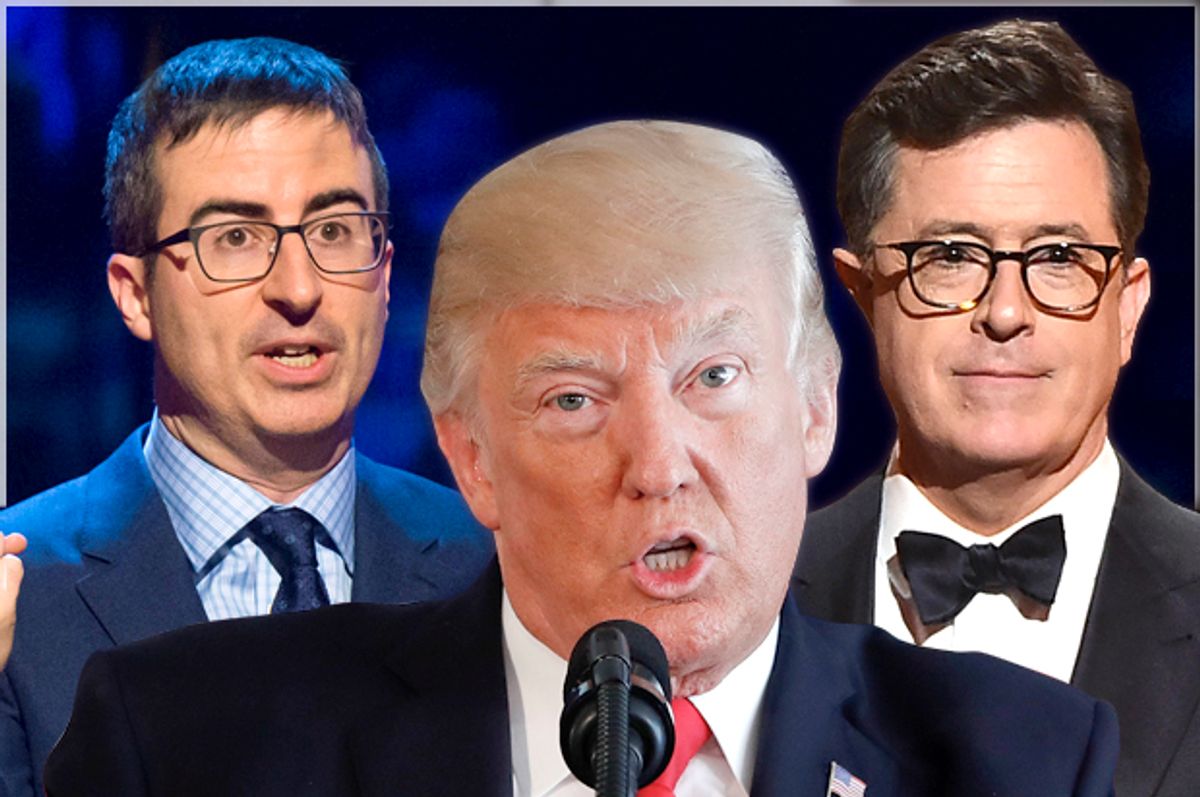 There is so much to unpack in the wake of the events in Charlottesville last week that I suspect we will be debating its significance for some time to come. Much of the coverage of Donald Trump's response to Charlottesville has focused on his not-so-subtle racism and on the various ways that his presidency has legitimized white supremacy culture. And much debate has focused on the fallout of Trump’s “many sides” comment.

But here’s the problem. So much of the public debate has felt rehearsed and predictable. Watching the collective public response, especially via the mainstream, corporate news, it was hard not to wonder if the news media was actually sort of pleased at how things went down.

Sure, commentators on CNN and MSNBC expressed sadness and dismay, but there was a sense that folks were also sort of thrilled to have yet another opportunity to explore a Trump scandal. Everyone of good conscience was alarmed by Trump's response, but the mainstream news seemed to almost immediately turn that alarm into more sensationalist journalism.

Take Jake Tapper of CNN, for instance, who interviewed White House homeland security adviser Tom Bossert on his show shortly after Trump first refused to condemn the attacks and identify the perpetrators. The exchange was a totally predictable display where Tapper expressed moral outrage and Bossert offered the same moral equivocating we have seen from all of Trump’s lackeys. While Tapper said all of the right things and made all of the key points, the exchange still felt like a performance.

Meanwhile, the true performers — the late night comedians — offered a different form of public response, one that felt considerably more sincere than those in the news media. Even Jimmy Fallon, who has notoriously attempted to avoid any sort of political comedy, opened his first show after the Charlottesville attack with a heartfelt expression of outrage. “It’s important for everyone, especially white people in this country, to speak out against” the dangerous ideologies on display in Charlottesville, he said in his opening monologue.

From Fallon to Jimmy Kimmel, who also only recently became more political in the wake of the health care debate, to Stephen Colbert, late night comedians responded to the Charlottesville attacks with grace and passion and a unified commitment to school Trump on his lack of leadership. One consistent message from them was that calling out the KKK and Nazis is a simple, ethical task for a president.

Colbert directly called out Trump’s inability to name the source of the violence: “Our hearts go out to the victims and their families, and it is difficult to express how heartbreaking it is to see something like this happening in our country. But here’s one thing that’s not difficult to express. Nazis are bad. The KKK? I’m not a fan. That wasn’t hard. That was easy. I enjoyed saying it.”

He then mocked Trump’s reference to “many sides,” saying: “Many sides? Mr. President, this is terrorism, not your order at KFC.”

Seth Meyers had fun mocking the fact that the makers of Tiki torches were quicker to condemn the violent protesters than Trump. “You know it’s bad,” he quipped, "when the thing you’re angrily waving denounces you.”

When John Oliver covered the Trump response, he pointed out that there are “not many instances in modern American politics where you can honestly think ‘that guy really should have mentioned the Nazis,’ but this is emphatically one of them.”

Last week I wrote about satire’s bipartisan war on stupid. This week we have now seen another key feature of satire: It offers ethical responses to unethical actions.

The ethics of satire is often hard to see, especially because comedy can so often be crass and crude. Recall that Colbert once called Sarah Palin “a fucking retard,” and he recently told his audience that Trump’s mouth was only fit to be a “cock holster” for Putin.

This is all to say that comedians are unlikely moral leaders. And yet in the Trump era, when literally every value in our nation seems to have been turned upside down, we are now seeing comedians play an increasingly larger role as champions of good versus evil.

This is why as Meyers ended his monologue he directly went after Trump for failing to uphold his moral obligations as president of our nation:

The leader of our country is called the president because he’s supposed to preside over society. His job is to lead, to cajole, to scold, to correct our path, to lift up what is good about us and to absolutely and unequivocally and immediately condemn what is evil in us. And if he does not do that, if he does not preside over our society, then he is not a president. You can stand for a nation or you can stand for a hateful movement. You can’t do both. And if you don’t make the right choice, I am confident that the American voter will.

Meyers wasn’t just scolding Trump for failing at his job; he was also showing his audience what real leadership looks like. Meanwhile, leaders of the GOP spitted and sputtered in response to Trump, often avoiding outright condemnation of his moral failings.

Usually this feature of satire is harder to notice because mockery is not obviously a source of introspection and reflection. It is weird to think that comedians who crack jokes about dicks might also be offering their audiences guidance towards a better moral compass. But at its heart, satire is always about asking the audience to challenge corruption, to fight abuses of power and to reject a culture of lies, manipulation and dishonesty.

That is why shows like Samantha Bee’s “Full Frontal” don’t just cover Trump’s evil agenda; they actively work to encourage their audience to thwart it. In response to the events in Charlottesville, the show's website featured a piece on “Life After Hate,” a group that helps bring people out of the white supremacist movement. “Life After Hate” unsurprisingly had its budget cut by the Trump administration, so “Full Frontal” is supporting the group’s crowd funding efforts and encouraging its audience to donate to the group.

It’s a level of public advocacy that has been actively in place among political comedians since Jon Stewart and Colbert were using their shows on Comedy Central to engage in political action that went well beyond sharp wit and sassy jokes. From their rally on the National Mall to advocacy for legislation and campaign funding reform, Stewart and Colbert took up political causes at a level never seen before in our nation’s history. Trump and his hateful agenda have only ramped it all up a notch.

Satirical interventions meant to expose the depravity of Trump are literally everywhere today. One fun example is a flipbook called “America Has Very Nice Legs,” that allows readers to mix and match Trump’s own words. The result? Up to 32,768 phrases that are equally hilarious and frightening. The book shows readers that Trump’s rhetoric is vacuous and inept — but, most importantly, it also reveals that it is morally bankrupt.

Jabs and jibes and in your face mockery don’t seem to logically link to a fight for morality, ethics and integrity. But that's the catch — at its best, satire uses those crass and crude moments to ask audiences to rethink their moral compass. Because it often targets the status quo, satire calls attention to inequality, to hypocrisy and to abuses of power. It's one of the few types of comedy whose main goal is to shake the audience out of complacency and complicity.

Lovers of comedy know that there is a huge difference in the type of comedy on offer from a comedian like Fallon and one like Oliver. Fallon offers entertaining comedy. It is often silly, and the laughs stem from making fun of the human condition or from his goofy antics. Political comedians like Oliver offer a comedy meant to inspire critical thinking. The laughs at political comedy are less chuckles at stupid silliness and more chuckles at the use of sharp wit, sarcasm, snark and irony.

It’s certainly fascinating to watch as comedians increasingly take on major political issues at the same time that our politicians and the mainstream media wallow in sensationalism and hype. Even though it has always been true that satire and irony aim to offer meaningful communication that cuts through hubris and hypocrisy, we have clearly entered into a new reality. Now the moral leaders in our nation are more likely to be on comedy shows than in Congress or the Oval Office.