In defense of Solitaire, the “perfect game”: Mindfulness, video games and the importance of downtime

Solitaire might be the most-played video game in history. Its legacy — as more than a mere game — endures 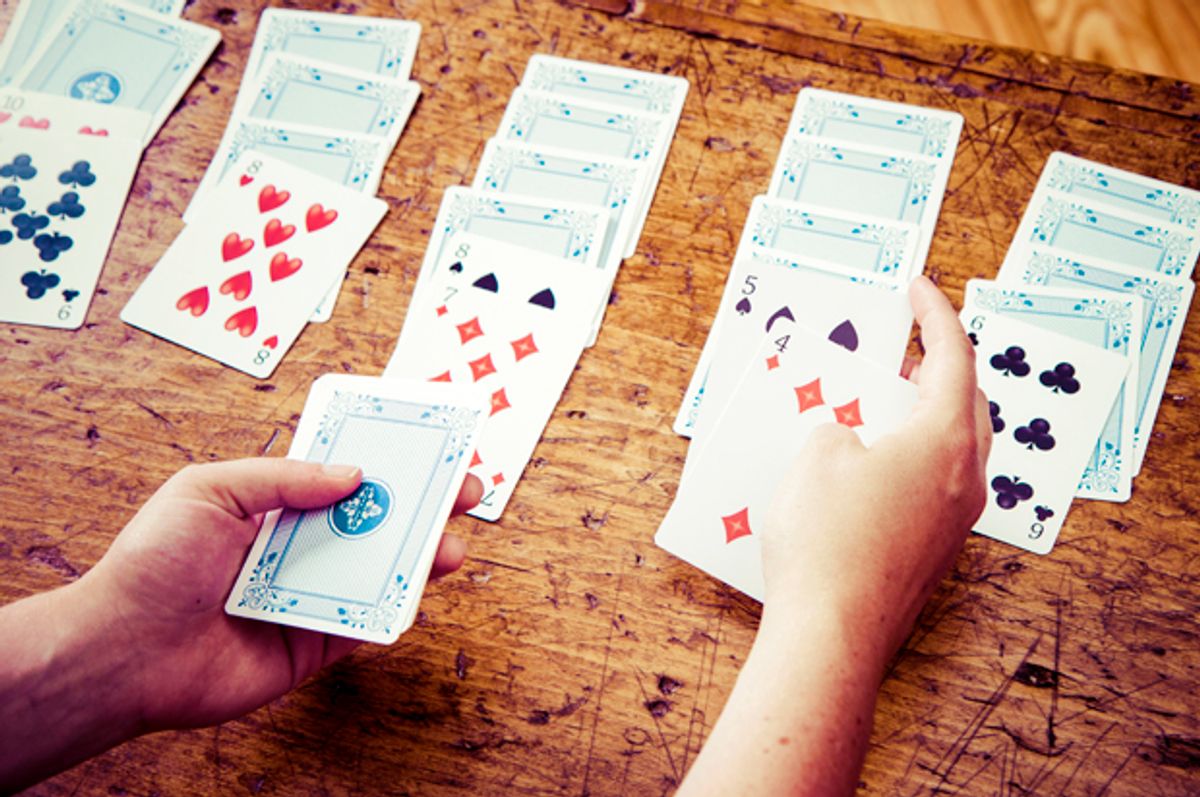 Video games may have gotten really good, but a truly unusual game just won Game of the Year at the 13th Annual Games for Change Festival in New York. It’s called “Walden,” and it’s a single-player game that depicts going into the woods to live alone à la Thoreau; at its heart is the idea of solitude and deliberate living. This unusual and unusually popular game represents a marked shift in our definition of a game, and a return to individual experience — an introspective one at that.

Are games the new “mindfulness machines”? Actually, games always have had a relationship to mindfulness. And nowhere is the connection between games to a sense of slowness and mindfulness more apparent than in the game of Solitaire.

Game historian David Parlett has written that the classic Solitaire likely developed in the Baltic in the 18th century, possibly as a form of fortune telling, during a wave of renewed interest in tarot and cartomancy. Hundreds of variants of Solitaire exist, each with a curious name tied to a range of references from Athena to Napoleon. Note that names for the game vary around the world, and in many parts of Europe the name of the game is Patience. The links between aloneness, duration and stillness have been there since the beginning.

The key to Solitaire for me is a satisfactory sense of aloneness. Each time I walk up the aisle on a flight, or move down a subway car, the instinct to look for individual experience kicks in; I check people’s screens and scan for how many people are playing some form of game. It’s a habit I developed as a student of culture and as a game designer. In particular, I look for Solitaire.

I developed a fascination with Solitaire well before it appeared on our gadgets; my mother was a homemaker who for many years didn’t have a driver’s license. We lived in the countryside with one car, so my mother was essentially homebound. Throughout the day she had a game of Solitaire laid out on the kitchen table. In the evenings, we’d make popcorn and play cards. I grew up playing Solitaire, with my cards laid out next to my mother’s.

Solitaire and other single-player games allow for focus and interruption, for the fluidity of life, for a moment of quiet mind in the middle of another durational task. Such games exist in a different temporal plane -- and one could argue, a different dimension, for the wonderful revelry of aloneness in Solitaire allows for aloneness even with or around others.

"Microsoft Solitaire" was released in May of 1990, as one of two built-in games in Microsoft Windows (the other being "Minesweeper"). The game opens on a bright-green background, the felt-green of a professional card table that recalls a casino. In an interview in the Washington Post, Libby Duzan, Microsoft’s lead product manager for entertainment, claimed that "Solitaire" was included in Windows 3.0 to “soothe people intimidated by the operating system.” The game had the added bonus of teaching people to use a mouse instead of just a keyboard. Microsoft admitted that for years that the most-used application in Windows was "Solitaire."

When Solitaire finally went digital, my mom did too. The idea of Solitaire appearing on the computer actually moved her to acquire a computer of her own, a hand-me-down HP. From then on, instead of playing in the kitchen, she huddled in the small bedroom where the bulky beige computer could fit. Gone were the cards on the table and the wonderful flutter of shuffling cards that evoked the quick wings of a grouse rushing into flight. (Now she’s playing it on an iPad.)

Digital games have their own special properties, of course. To add challenge, Microsoft’s programmers added a timer to their Solitaire. This feeling of limitation shifted the contemplative tenor of the game — but then again, all meditation practices are completed within time periods. In fact, timers are supported by the Thich Nhat Hanh Foundation, a Zen Buddhist nonprofit, as ways to remind oneself to check in. Apple’s app store is filled with meditation timer apps, mindful bells, and sounding gongs to remind us to breathe and notice our place in the universe. Perhaps the act of shuffling cards -- a kind of reflective, embodied break -- in days of paper cards did the same. Shuffling — from 5 to 6 times in order to create maximum distance distribution, according to probability theorists — is really an invocation for randomness to enter our lives.

Every historical era develops a unique perspective on the relationship between ourselves and the cosmos. In our current ludic age, as some call it, playing a simple, single player game like “Solitaire” -- or “Walden” -- may be as profound and useful as meditation. Thoreau, in his “Walden” chapter “Solitude,” noted “I have a great deal of company in my house; especially in the morning, when nobody calls.” Fullerton’s “Walden” game and Thoreau himself both link that sense of detachment and engagement as a way to cultivate a sense of self: “By a conscious effort of the mind we can stand aloof from actions and their consequences; and all things, good and bad, go by us like a torrent.”