"Looming danger" in Missouri: Why the NAACP says the state is dangerous 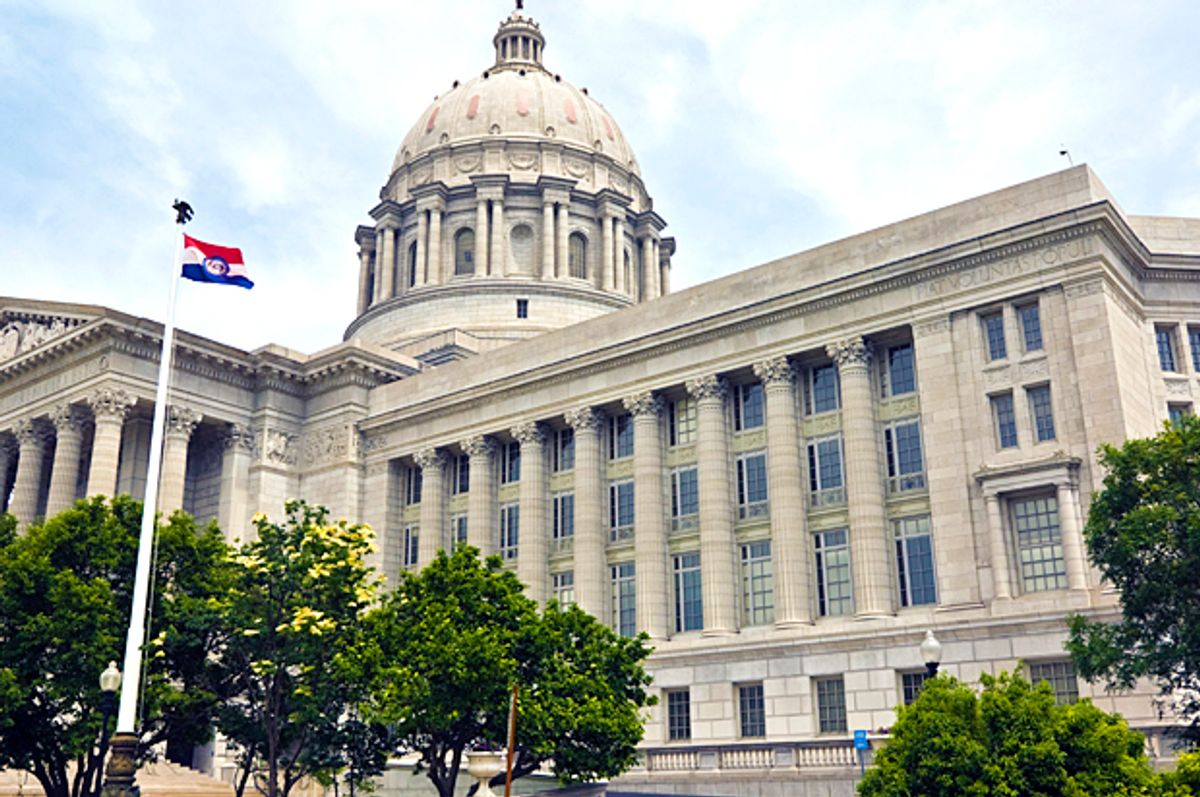 Missouri’s neophyte governor had yet to sign the regressive bill that would prompt the NAACP to warn people against visiting the state when a city with a long history of discrimination tried to use the bill to get a jury verdict thrown out.

Attorneys for Springfield, in southwest Missouri, asked Greene County Judge Michael Cordonnier in May to order a new trial in the discrimination case of Alberto Estrada, a Hispanic police corporal. Their request was ultimately unsuccessful, but Springfield and other Missouri employers can use the law, when it becomes effective Aug. 28, to beat back discrimination claims.

“Can you imagine how ludicrous it is to apply a law that’s not even on the books?” asked civil rights attorney Rod Chapel Jr., the president of the state NAACP chapter.

The NAACP is warning of “looming danger” to Missouri residents and visitors because of the law, Senate Bill 43, and other racial problems, including the jail death in a southeast Missouri county of an African-American man who had run out of gas while driving to Memphis, Tennessee.

NAACP leaders hope their advisory leads state legislators to take a second look at the law.

In North Carolina, legislators partially repealed HB2, the so-called bathroom bill, after the NCAA moved its 2016-2017 championship events out of the state. In Indiana, the Religious Freedom Restoration Act was amended after opponents said it would open the door to discrimination against lesbian, gay, bisexual and transgender people.

“Actions like this can result in legislators reconsidering their action,” said NAACP member Marla Marantz of Springfield.

St. Louis hotels have reportedly lost business because of the travel advisory.

The Missouri law will make it tougher for women and minorities to successfully sue for workplace and housing discrimination and strips them of the right to sue the individuals responsible for the workplace discrimination. Employees in wrongful termination lawsuits will have to prove that bias was the explicit reason they were dismissed, instead of a contributing factor.

The law also weakens protections for whistleblowers, excluding state and local government employees and employees of public colleges and universities, from protection against retaliation. It also caps damages.

“This exclusion could allow state employees to be fired for reporting government activities that threaten public health or disclosing other malfeasance to the legislature, state auditor, attorney general, or any state entity charged with investigating alleged misconduct,” said State Auditor Nicole Galloway.

Employers with fewer than 100 employees could be ordered to pay back wages and up to $50,000 in damages. The damages rise in stages to $500,000 for employers with more than 500 employees.

“All protections are pretty much going to go away,” said Cheryl Clay, the president of the Springfield NAACP. She added that racial issues in Springfield are not as bad as in some other Missouri cities.

The law was sponsored by state Sen. Gary Romine, R-Farmington, whose rent-to-own furniture business was sued for racial discrimination that included allegations of not renting in a black neighborhood.

A House version of the bill was sponsored by Rep. Kevin Austin, R-Springfield. Another southwest Missouri lawmaker, Rep. Bill Lant, R-Pineville, ordered Chapel’s microphone turned off during a committee hearing when Chapel said the bill would bring back the days of Jim Crow.

Austin said the bill was not racist.

“We’re not going out of line (to) some sort of 1956, Deep South, Mississippi, ‘we’re gonna get you’ kind of thing,” Austin said. “We’re just going in line with everybody else.”

Missouri’s new governor, Eric Greitens, who has vilified trial lawyers, signed the law, saying it would bring Missouri in line with standards used in “38 other states and the federal government.”

In Springfield, Estrada sued the city in 2015 after he was passed over for promotion to sergeant eight times. Estrada, born to Puerto Rican parents, was the only racial minority to be on a promotion list for sergeant in the 150-year history of the police department, according to court documents.

About 1 percent to 2 percent of the roughly 300 officers on the force were minorities, according to court documents. About 4 percent of Springfield’s population is Hispanic, and about 4 percent is African-American.

Estrada was passed over for promotion as Paul Williams, the police chief, instead chose corporals who had internal affairs complaints, a corporal who had a DWI, and a corporal who was counseled because of an officer-involved shooting, according to court records. Williams also promoted corporals with lower test scores.

Williams testified during that jury trial that he didn’t know Estrada was Hispanic and said he didn’t promote Estrada because of performance issues. None of those issues rose to the level of documented counseling or discipline.

In February, the jury awarded Estrada $30,000 in damages after it found race was a contributing factor to his not being promoted.

Springfield asked for a new trial after Senate Bill 43 was approved by the Republican-controlled legislature but before it became law. The attorneys for the city referred to part of the bill that threw out a Missouri Supreme Court ruling to allow a jury to be told to consider “business judgment” when reaching a verdict.

Springfield Mayor Ken McClure said the city is proud of the efforts it is taking to ensure diversity and will continue to improve.

“We can always do better,” McClure said.

Springfield’s racial history includes lynching three African-American men on Easter weekend in 1906 from a tower in the city square topped with a bronze Goddess of Liberty. Their bodies were doused in coal oil and set on fire. About 3,000 people watched.

During the Great Depression, the 1937 Negro City and County Directory listed which Springfield businesses would hire African-Americans and which wouldn’t.

African-Americans could get jobs at Dr. Pepper but not Coca-Cola or Nehi. They couldn’t work at Springfield Newspapers, Inc., but the two railroad companies hired African-Americans.

“Just how far back in time are they planning to take us?” asked Esther Haywood, president of the St. Louis County NAACP.