Don't be that guy 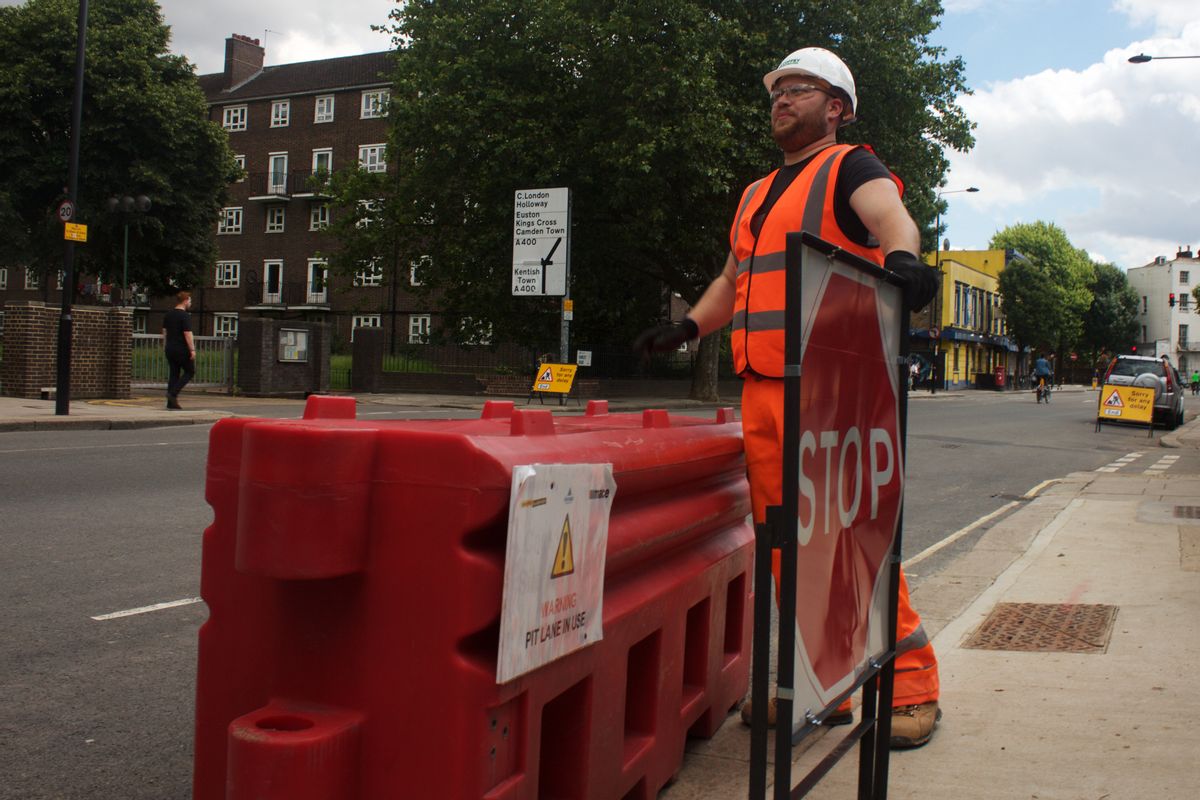 In this photo taken on Friday, June 24, 2016, Gabriel Ionut, a 24-year-old Romanian who works as a traffic marshal, stands by a signal at a construction site in London. (AP Photo, Pawel Kuczynski)
--

People often say, “Your words don’t matter — it’s your actions that count.” Yet in reality, the way you communicate can speak volumes about your values. This is especially true in a professional environment, where everyone has the right to feel seen and respected. Unfortunately, coworkers sometimes use language that can be disrespectful, even if they don’t mean to.

Below are a few phrases that, regardless of intention, can be marginalizing.

Thanks to our Cheeto in Chief, this one’s been getting lots of press recently. Investopedia defines “low-skilled labor” as “a segment of the workforce associated with a limited skill set or minimal economic value for the work performed. Generally characterized by a lower educational attainment, such as a high school diploma, GED or lack thereof, and typically results in smaller wages.”

While these jobs traditionally involve lower wages, they also require lots of practice and mental focus. Occupations that people often refer to as low-skilled” include cleaning, farm labor, grocery clerks, and retail employees.

Why is saying “low-skilled” not okay? Well, the term suggests that these jobs don’t require any brain power—which means the people holding them aren’t intelligent. Yet in reality, folks with these jobs are doing hard work to support themselves and their families. As a recent piece for Remezcla showed, numerous people turned out on Twitter after the Trump debacle to give a face to those who are “low-skilled:”

My "low-skilled" mom picked cotton as a kid and cleaned houses for nearly 30 yrs. I challenge you to do a month of either, @RealDonaldTrump.

My "low skilled" mom cleans houses too and all three of her kids are in college because of it. Pa que lo sepan✊🏼 https://t.co/TRxrUrwqxl — Juli 🇻🇪✨ (@hoodrichglossy) August 3, 2017

The term is dehumanizing, and should be reconsidered. One possible rephrasing is “manual workers.”

The definition of “urban” is “Of, pertaining to, or designating a city or town; living in a city; characteristic of or accustomed to cities; citified." Note that urban does not mean black. Yet somehow, the two words have become conflated. Companies have “urban marketing” departments. “Urban” music is music that’s tied to black culture. However, urban environments are not entirely composed of black people. According to Elizabeth Kneebone, a fellow at the Metropolitan Policy Program at the Brookings Institution, 39 percent of African Americans live in the suburbs, 36 percent live in cities, 15 percent live in small metropolitan areas, and 10 percent live in rural communities. In reality, the most “urban” race is actually white. If you’re trying to address minority and/or financially distressed groups in your business, use the correct terminology.

This phrase is so common that it can be difficult to stop using. However, it’s a damaging one. When you’re speaking to a mixed-gender group, saying “you guys” puts the attention solely on the men. Do you want to do that? Of course not! It’s important to make sure that everyone you’re addressing feels seen and acknowledged, regardless of gender. Male-centric language subtly hints that women are lesser.

The American Disability Act has asked for the word “handicap” to be replaced with “disability.” Why? Because the word handicap is othering. It makes it seem as though people in that group are different, when in reality a person can become disabled at any time. As Jill Layton notes on Hello Giggles, “ It can happen to you, your friends and any of your family members, at any age. It can be a fluke accident, a botched surgery, an illness, etc. No one is immune.” Other phrases for disabilities that are workplace appropriate include special needs, physically/mentally challenged, people with disabilities, or people with limitations.

People often use the word “ghetto” when they mean “bad.” This is not cool because it directly associates the inner city with being lower-class or subpar. "The problem with the word is that it's very difficult to disassociate it from its use to characterize low-income African Americans,” says Mario Small, a professor of sociology at Harvard University, in an article for the BBC. "Thus, when 'ghetto' is used as an insult, it often sounds like a racial insult." Instead of saying ghetto, get more specific about what you dislike about the situation or place. Sure, there are larger issues than language in the workplace — like the wage gap, or the amount of sexual harassment claims that result in no charge. Yet the words you use in a professional setting can establish whether you’re taking the feelings of others into consideration. By being aware of your language, you acknowledge that your team is made up of people from a variety of backgrounds — and that they all deserve respect. Once others see your good example, they’ll hopefully follow suit. And that, friends, is how workplace culture can change for the better.