Carlson's media empire steers just clear of the alt-right, while telling racists their beliefs are respectable 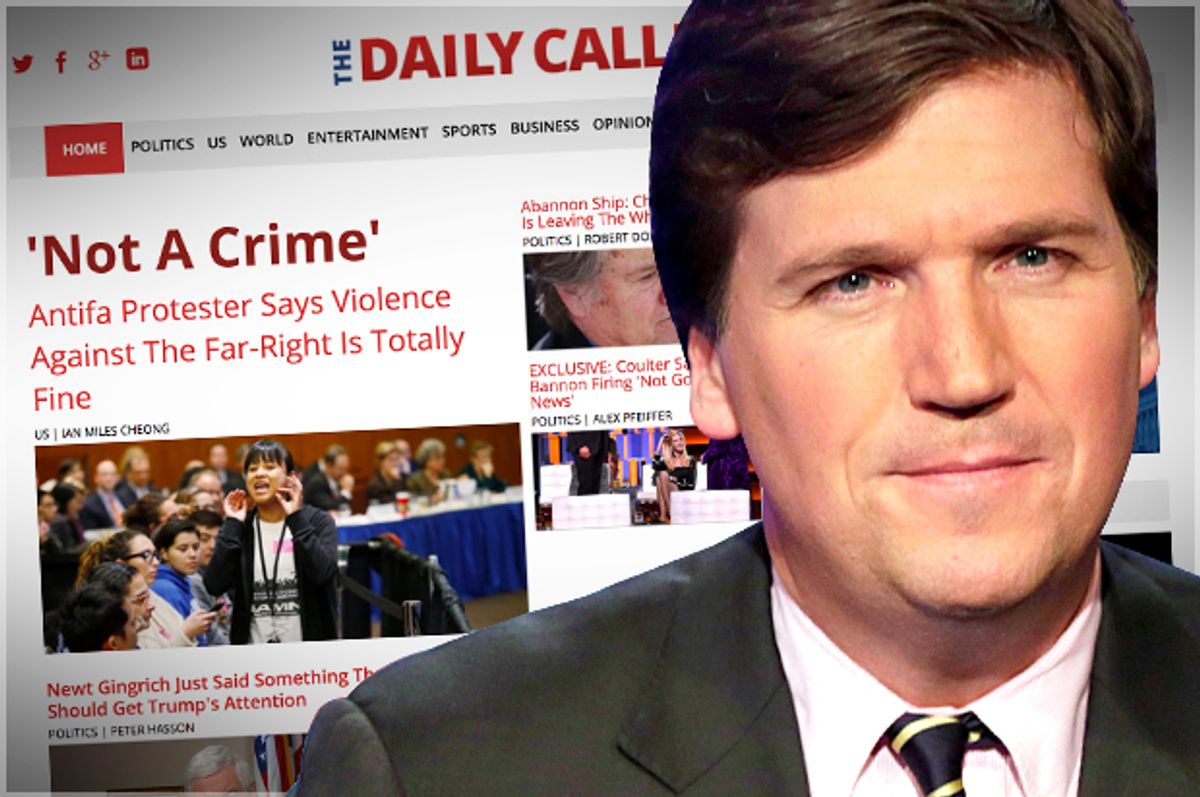 Donald Trump's temper tantrum last week, in which he defended a torch-wielding mob of people chanting Nazi slogans as "fine people," was so terrible that it may be hard to believe that Republican voters will stand by him. But sure enough, they are doing just that. A CBS poll found that an alarming 67 percent of Republicans approved of Trump equating white supremacists with those who showed up to resist them.

If this is a surprise, it shouldn't be. Huge chunks of conservative media have spent months, in some cases years, softening up audiences for white supremacist apologetics and inviting white supremacists in as active members of the conservative community. With sites like Breitbart, whose comment section sometimes reads like a Klan rally, this has been more obvious. But one of the most effective mainstreamers of white supremacist ideas has been Tucker Carlson, both in his role as a Fox News host and through the website he founded in 2010, the Daily Caller.

Carlson started the Daily Caller in 2010 as a right-wing alternative to the Huffington Post, but, as a new report from the Southern Poverty Law Center lays out, the website has drifted towards a more white nationalist bent in recent years.

"Throughout the 2016 election and since, the Daily Caller has not only published the work of white nationalists, but some of its writers have routinely whitewashed the Alt-Right, while one editor there is an associate of key Alt-Right figures," write SPLC researchers Stephen Piggott and Alex Amend.

For instance, the Daily Caller has published the writing of Jason Kessler, the organizer of Unite the Right rally in Charlottesville that descended into deadly violence. After ProPublica exposed Kessler's history of white supremacy, the Daily Caller dropped him, but it continues to work with white nationalists and the site's list of contributors includes several people tied to the white nationalist movement.

Even more disturbingly, according to the SPLC report, Daily Caller deputy editor Scott Greer "has questionable ties to many younger members of the white nationalist movement."

But none of this should come as a huge surprise, since Carlson has been busy promoting white supremacist ideas to the more mainstream audience at Fox News.

"He’s further mainstreamed ideas that begin in the far corners of the radical right,” Ryan Lenz, a senior investigative reporter for SPLC. “On his Fox program he is taking the white nationalists who have infiltrated the Daily Caller and giving them an even larger platform."

For instance, Lenz pointed out, Carlson had Greer on his program to push his book "No Campus for White Men," even though Greer has extensive links with white supremacist movements and has been photographed attending a white supremacist gathering.

“These white nationalists and supremacists and neo-Nazis really love Tucker Carlson’s show," Matthew Gertz, a senior fellow at Media Matters, explained to Salon. "With Tucker Carlson taking on this prominent role on Fox News, it's a major opportunity for what had been a fringey movement to make inroads in national discourse."

Since Carlson got his primetime spot at Fox News, Gertz explained, he has been heavily pushing two themes "that white supremacists have been making for years": That immigration, legal or otherwise, is a threat to America and that Western or "European" culture is being undermined not just by immigrants, but by native-born Americans who support diversity and multiculturalism.

One particularly telling example came when Carlson devoted an entire segment of his show to demonizing a group of 40 Roma immigrants, who were trying to escape oppression in Romania. Carlson accused the immigrants, whom he called "gypsies" -- that term is generally now understood as offensive -- of spreading human feces in the streets. This legend was apparently the result of one 10-year-old boy having an accident, as children do, but the story grew in the racist grapevine, as ugly rumors do.

The choice to pick on the Roma strongly suggests that Carlson is deliberately pandering to white nationalists. Modern white nationalists see themselves as part of a "European" identity movement and appear to think adopting European-style bigotry, such as fearing or distrusting the Roma people, is more sophisticated than the traditional image of the white supremacist as a hood-wearing hillbilly. That desire to appear respectable is also why so many of the fascists marching on Charlottesville were wearing polo shirts and khakis, with dandified haircuts.

This strategy is part of "an effort to provide a semblance of political respectability," said Lenz, to convey the impression that "people who order flights of microbrews and can talk about lofty books" are the face of white supremacy.

“You think of Tucker Carlson as the mild-mannered, bow-tied guy from 'Crossfire' back in 2004," Gertz explained, "but you read the commentaries that people on these neo-Nazi and white supremacist websites write, and one of the things that really impressed them was not only his ideas but how effective he is at communicating them.”

Since the events in Charlottesville, Carlson has been hustling hard to minimize the ugliness of the white supremacists, defending some of their arguments and, according to Gertz, focusing on claims that "liberals are going too far".

Since Charlottesville, Carlson has compared the tearing down of cheap, mass-produced statuary to the Taliban's destruction of the Bamiyan Buddhas, priceless cultural artifacts that had survived for 1,700 years. He has minimized the importance of chattel slavery to the antebellum South by arguing that other cultures did it, too, as if that justifies monuments to men who are only famous for committing treason on behalf of that "peculiar institution." Carlson also did ansegment denouncing tech companies that exercise their legal right to deny service to those who use it to spread racist propaganda.

All of these segments are about one thing: Convincing his audience that the real problem isn't the Nazis, but the liberal resistance to Nazis.

"You will never see Tucker Carlson say white people are superior" to other races, Gertz said, "and I expect if you were to ask him if he believes that, he would say no." But such disavowals matter little when the bad-faith arguments of white supremacists are being mainstreamed through Carlson's show and the Daily Caller.

"Tucker Carlson Tonight" is the most watched cable news show in the country. Not that we needed more reminders after an unrepentant racist like Trump was elected president, but it's just further evidence that there are a whole lot of people in this country sympathetic to white nationalist arguments, and they are getting more emboldened and radicalized in their views.