For the first time, white players have joined their black teammates in taking a knee during the national anthem 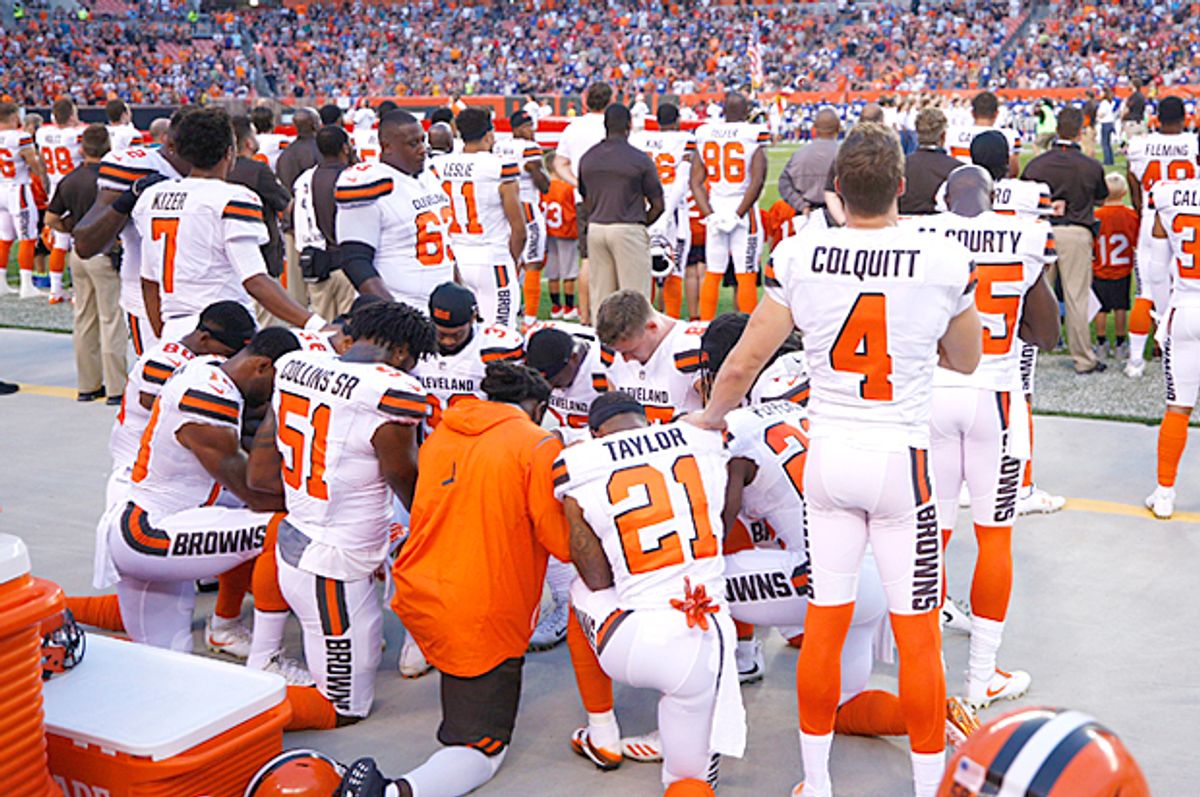 Monday night, in the largest such demonstration thus far, 10 Cleveland Browns players kneeled ahead of their game against the New York Giants.

The players formed a circle during the national anthem and rested their hands on each other's shoulders in prayer. Five other players stood, hovering over them while placing their hands on their kneeling teammates' shoulders. Two of the 15 players who participated — a group that included rookies, veterans, starters and backups — were white.

This comes less than a week since Seattle Seahawks defensive end Michael Bennett said the anthem protests would be amplified if white players joined in.

During half-time, the players released a statement through a spokesperson:

As an organization, we have a profound respect for our country’s national anthem, flag and the servicemen and servicewomen in the United States and abroad. We feel it’s important for our team to join in this great tradition and special moment of recognition, at the same time we also respect the great liberties afforded by our country, including the freedom of personal expression.

"I love this country," DeValve said in a separate explanatory video posted to social media. "The issue is that it doesn't provide equal opportunity to everybody. I wanted to support my African-American teammates today who wanted to take a knee. We wanted to draw attention to the fact that there's things in this country that still need to change."

The anthem protests have become famous since Colin Kaepernick first took a knee last season. But his decision to protest police brutality, racism and the unequal criminal-justice system seems to have left him blackballed from the NFL. While he continues to engage in philanthropy, protest and community work, the talented quarterback still doesn't have a NFL job in a league that is currently hurting for quality players in that position. His apparent exclusion stands in stark contrast to the hosts of players re-signed after being accused of physical and sexual assault.

Oakland Raiders running back Marshawn Lynch was one of the first players to reignite the anthem protests this season when he chose to sit during the national anthem at the Raiders' opening preseason game, one which marked his return from retirement. Bennett was next, citing the violence in Charlottesville. The defensive end has said he plans to sit all season to protest racial injustice.

It also appears as if the deadly white supremacist rally in Charlottesville last week influenced NFL veteran Anquan Boldin to retire. The wide receiver expressed deep concern for the state of America, leaving the league just two weeks after signing a one-year contract with the Buffalo Bills. "Do I think I can solve all the problems that we have in this country? Of course not," Boldin said, according to the Associated Press. "But I think I have a duty to stand up and make my voice heard and be a voice for those who don’t have a voice." Boldin became involved in criminal-justice reform after his cousin was killed by a plain-clothes police officer in 2015. "My passion for the advocacy work that I do outweighs football at this point," he said.

That black players have carried the torch Kaepernick lit in a league dominated by white owners and coaches is a strong declaration of their ownership over their minds and their labor. It seems particularly brave, given how fans and the media have villainized Kaepernick for his decision to protest. It will be important to monitor how and if the reception and coverage of these protests changes, now that some white players have chosen to join them.

Browns coach Hue Jackson appears to be showing at least some kind of change. Previously he had said of the anthem protests that he "would hope that we don't have those issues." After facing backlash, he amended his remarks several days later. "The intent of my comments was not to discourage individual expression from our players in light of a cause that moves them to personal expression," Jackson said. "I'm disheartened that I gave anyone that impression because I did not speak with enough clarity."

With the Browns' demonstration Monday night, support for the protests continues to grow (at least among NFL players). Whether this will lead to Kaepernick getting re-signed or to criminal-justice reform remains unclear. But, as to the power of this moment, Bennett said succinctly: "I'm not surprised by the resistance. I think this is the time."