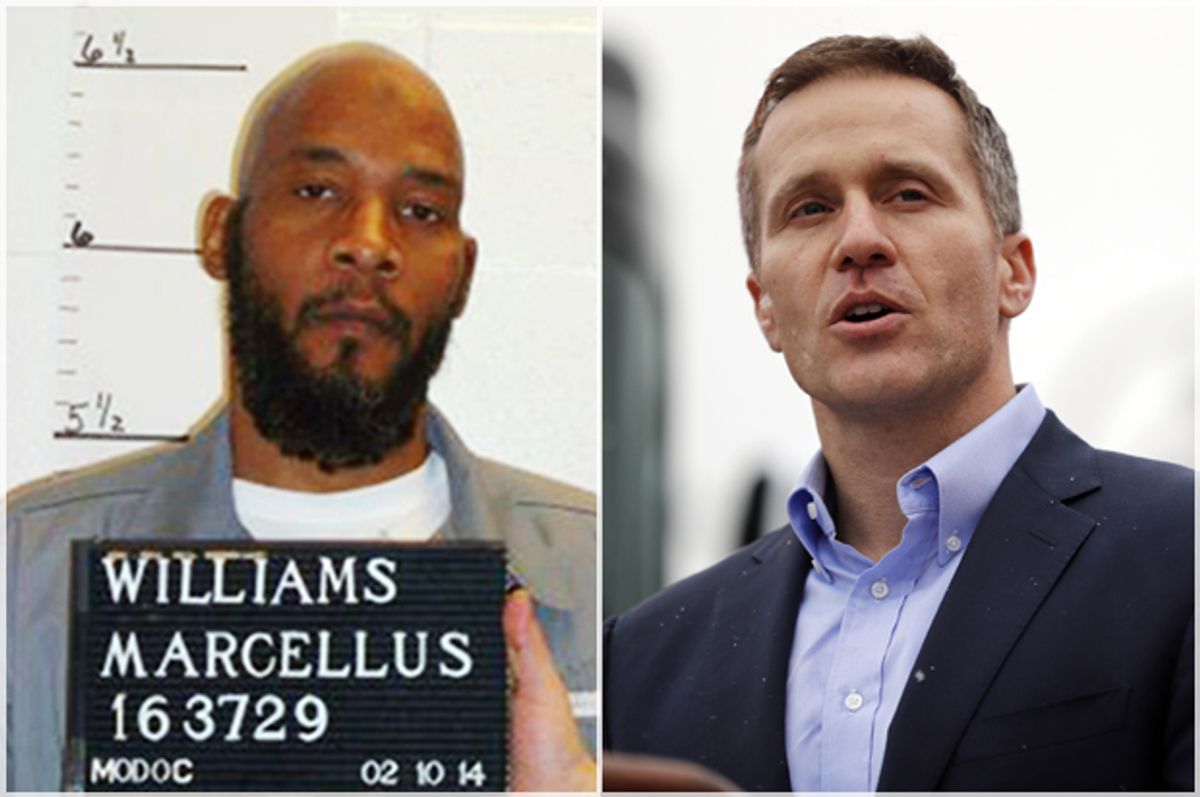 Hours before 48-year-old Marcellus Williams was scheduled for execution by lethal injection, the newly elected Republican governor of Missouri halted the killing and called for the review of new DNA evidence that raises significant doubts about the death row inmate's conviction. According to Williams’ lawyer, a Missouri governor had not granted such a stay in at least 20 years.

Williams’ case had drawn national attention and attracted support from advocacy groups like the ACLU, NAACP and Amnesty International. Anti-death penalty activists and Williams’ lawyers scrambled to stop his execution in its final hours, appealing to the U.S. Supreme Court, as well as Missouri Governor Eric Greitens.

Williams was convicted in 2001 of murdering Felicia “Lisha” Gayle by a jury of 11 white people and one black person in St. Louis. He was scheduled to be killed by lethal injection at 6 p.m. on Tuesday.

A former reporter with the St. Louis Post-Dispatch who left to become a full-time volunteer, Gayle was in her home when she was stabbed 43 times with a butcher knife.

Williams’ conviction rested on the testimony of two controversial informants, a former cellmate, and a crack-addicted ex-girlfriend, who came forward only after learning of a $10,000 reward. The two later admitted to meeting to discuss their testimony, and several other inmates have since come forward to say they were approached by law enforcement to corroborate the jailhouse informant's testimony against Williams.

Williams, a devout Muslim, has always maintained his innocence.

Greitens said he would appoint a board to look into the new DNA evidence and other factors, before issuing a report about whether or not Williams should be granted clemency.

"A sentence of death is the ultimate, permanent punishment. To carry out the death penalty, the people of Missouri must have confidence in the judgment of guilt. In light of new information, I am appointing a Board of Inquiry in this case," Greitens said in the press release.

Using technology that was not available at the time of the killing, recent testing shows that DNA found on the knife didn’t belong to Williams, but to a third, unidentified person, according to analysis by three different labs. Greg Hampikian, a biologist with Boise State University told CNN that hair samples found at the scene also didn’t match Williams’ DNA, and a bloody footprint didn’t match Williams’ shoes. According to court documents, DNA evidence from the murder weapon and the scene of the crime were not available during Williams' trial in 2001. His attorney sought analysis of bloody fingerprints found at the crime scene, only to learn that law enforcement lost them — purportedly without ever having tested them.

“They’re never going to ever confront an actual innocence cause more persuading than this involving exonerating DNA evidence,” Kent Gipson, one of Williams’s attorneys, told CNN hours before the stay. “I’ve seen a lot of miscarriages of justice, but this one would take the cake.”

St. Louis County prosecutor Bob McCulloch, famous for his failure to indict the police officer who killed 18-year-old Ferguson resident Michael Brown, however, says there is "zero possibility" that Williams is innocent of the fatal stabbing. A spokeswoman for Attorney General Josh Hawley also said this week that the office remains confident that Williams is guilty, based on other non-DNA evidence in the case.

"It's just remarkable to me that the attorney general and the other people defending this conviction can say with a straight face that DNA does not trump the evidence that they've submitted," Williams’ lawyer told Missouri’s KMOV on Tuesday.

Missouri is one of only three states that have executed at least one person each year since 2013.