"Disjointed": The marijuana sitcom made for killjoys who don't smoke pot

There are probably decent arguments for why you may want to watch this sitcom but . . . we forgot them. Heh. Heh 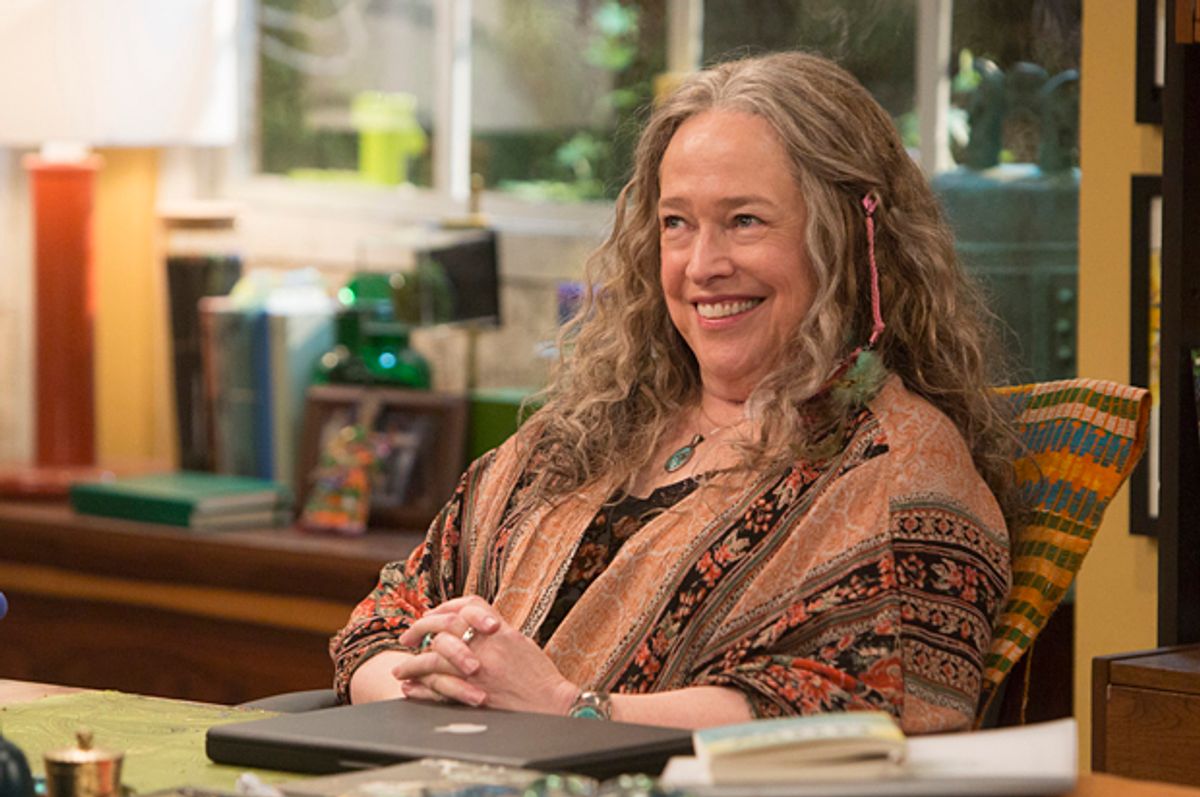 Sometimes smoking pot can make a person feel stuck — as in, the body can’t move, or be moved to move. Such a state goes well with the “Netflix and chill” ethos because if you’re locked inside it, odds are you have nothing better to do. Or even if you do, you’re not going to do it. Weed is hilarious like that.

Such a haze may also lead to heady musings, such as the notion that “bad” and “failure” can be mutually exclusive terms when it comes to television. Most of us know terrible television when we see it. But for reasons unknown, or the reason specified above, we keep on watching. Weed has a tendency to make failure bearable.

Then there are puzzles like Netflix’s “Disjointed,” premiering Friday. Created by David Javerbaum, formerly a writer for “The Daily Show with Jon Stewart,” and network comedy generator Chuck Lorre, “Disjointed” blunts its potential by tracing the linework of an established and well-traversed comedic niche with the same broad strokes Lorre employs in shows like “Two and a Half Men” and “Mike & Molly.”

Marijuana still isn’t legal for recreational use in most states, but pot is mainstream enough for the average viewer to know how mundane and widespread cannabis use is. Countless series have featured characters who smoke, and recent shows such as HBO’s “High Maintenance” depict users that hail from a variety of social strata leading normal productive lives.

There exists a poignant subplot in “Disjointed” involving the dispensary’s security guard Carter (Tone Bell), a veteran haunted by a frightening tour in the Middle East that left crippling scars in his psyche. Through Carter’s story, the show takes creative departures from the standard sitcom format using beautiful, haunting animated sequences, allowing viewers to gain a sense of his troubled interior state. These inventive visual soliloquies hint at a capacity for originality that could have made “Disjointed” a distinct entry into this subset of the comedy genre.

“Disjointed” also has characters hallucinating conversations with people who aren’t actually there and uninspired weed-centric fake commercials (though one insurance commercial spoof is legitimately funny). Above all, it asks us to connect to the crunchy owner of the shop where all the blazing takes place, a woman just wants to get people high, man, without the bummer of responsible business ownership.

In these ways and others, “Disjointed” huffs down every cliché about marijuana and the degenerates who use it, blowing them back in our faces with such knee-slappers as “stoners love a good sh*t joke.” It’s as if Javerbaum and Lorre wrote this alleged comedy for people who harbor disdain for cannabis culture, perhaps with the notion that what they’ll see will change their minds. This presumes people will want to watch the Netflix comedy for more than a few minutes and, you know, binge this thing.

If that happens, thank the show’s star Kathy Bates.

Bates can sell just about anything to Middle America, even a second-rate multi-camera laugh-in filmed before a live studio audience. “Disjointed” marks the award winning actress’ second go at helming a series after starring in NBC “Harry’s Law,” although she previously worked with Lorre on a “Two and a Half Men” guest star gig.

Here she plays dispensary owner Ruth Feldman, an old-school hippie who hangs charms in her hair and dedicated her life to legalization before opening Ruth’s Alternative Caring in Los Angeles. Ruth spends her days consistently, proudly and stubbornly getting high, talking about being high and shirking off the duties of entrepreneurship because, guess what? She’d rather be high.

Consistent with Lorre’s network comedy style, most of the action takes place within Ruth’s consumer space, her office and the dispensary’s grow room in back. Her staff of “budtenders” includes Pete (Dougie Baldwin), the resident botanist who speaks to his plants in an Australian accent for reasons unknown (other than the fact the actor who plays him is an Aussie). Then there’s Jenny (Elizabeth Ho), who introduces herself as the shop’s “tokin’ Asian” — allowing a pause for laughs — and Olivia (Elizabeth Alderfer), the obligatory cute white girl, a Lorre comedy staple.

Aaron Moten plays Ruth’s biracial son Travis, and he chafes at his mother’s lack of motivation even as he takes steps to give Ruth’s Alternative Caring a web presence. Ruth, meanwhile, is disappointed in Travis because he went to business school.

Travis sees the growth potential of his mother’s business, recognizing that the mainstreaming of cannabis and the spread of legalization places her on the edge of a pot boom. In essence, he’s the actual brains of this outfit. But Ruth is a soft, old school lefty radical who doesn’t want to become The Man, or the Wo-Man, and just wants to give people her “healp.” Did we mention that she’s stoned all the time?

Notice how tightly the simplistic comedy formula that made “Two and a Half Men” a gigantic hit is rolled into “Disjointed”: A misbehaving central character is joined at the hip to a straitlaced, exasperated awkward sidekick. Together they’re surrounded by gentle buffoons. Toss them dialogue that sets up obvious punchlines and leaves spaces for gales of cued-up laughter and blam, you’ve got enough bland content for 20, half-hour episodes.

“Disjointed” is a stoner comedy for people who don’t get stoned, written by people who I suspect either haven’t been high for a very long time, have never gotten high, or thought that they were smoking weed that one time but were actually inhaling burnt oregano laced with bath salts. Like a lonely, virginal mathlete who wants to befriend the burners in his dorm, the show’s humor is enthusiastic, harmless and not as convincing in its familiarity with the subject matter as it wants us to think it is.

It also proves that creating a winning pot comedy requires its own potent strain of expertise, including knowing how to balance sophomoric humor, honest insight and ludicrous situations to achieve euphoric effects. “Disjointed” never hits such heights, and that leads a person to have renewed appreciation for the series and films that do.

You would have to be very, very high — as in, melting into the couch — to dedicate 10 hours of your life to this show. But even that might not help, since that state tends to make time stretch out. No amount of green can make this experience palatable.