On top of everything, Donald Trump has a stupid Super Bowl ring now

Unlike Vladmir Putin's, Trump's ring from the New England Patriots was actually made for him 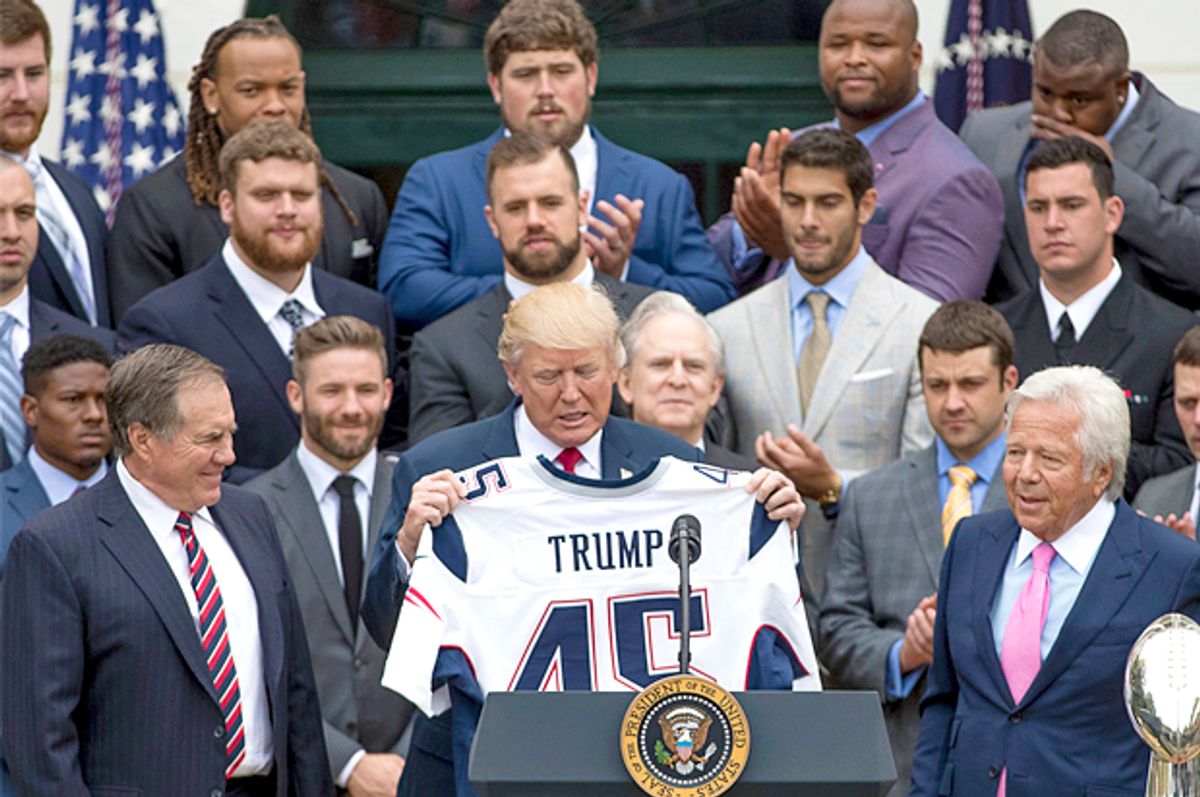 With scores of buildings and golf courses, a beautiful family, the entire might of the United States Armed Forces and his own brand of Ecstasy, President Donald J. Trump wants for little and deserves pretty much the same. And yet, today he was gifted with one more thing he did not truly earn or need: a Super Bowl ring.

New England Patriots owner Robert Kraft gifted the president his own specially ordered ring for, as the organization says, showing the team a particularly good time when it visited the White House in April as a part of their victory tour after winning Super Bowl LI against the Atlanta Falcons this April. Trump apparently took great pains to tour the champions around the White House and the grounds. Swell.

It should be noted that April did not mark the Patriot's first visit to the White House. President George W. Bush hosted the team in 2002, 2004 and 2005. President Barack Obama welcomed them in 2015. Neither of those presidents received their own ring. It should also be noted that team turnout for this year's White House festivities appeared smaller than it has been in previous years (quarterback Tom Brady was absent), though there was some contention about that.

It is typical for a team to hand out rings to non-players such as front-office executives, assistants, team family members, various supporters and even, in past years, grounds crews. This year's edition costs anywhere between $5,000 and $7,000, according to the Guardian.

The Guardian also notes that Trump — despite his dalliances with the USFL and constant attempts at getting his own franchise — has become somewhat of a booster of the Patriots, a team that has also shown support for him. Tom Brady had a long association with Trump that seems to have come to an end recently, and coach Bill Belichick delivered a somewhat out-of-character endorsement of the president late in the 2016 election.

Crucially, owner Robert Kraft has a friendship going back with the president several decades. As the Guardian notes, Kraft described Trump at the White House event in April as "A very good friend of mine for over 25 years, a man who is as mentally tough and hard-working as anybody I know, launched a campaign for the presidency against 16 career politicians, facing odds almost as long as we faced in the fourth quarter." He added, "It’s a distinct honor for us to celebrate what was unequivocally our sweetest championship with a very good friend and somebody whose mental toughness and strength I greatly admire."

Indeed, Trump had been a somewhat lazy champion of the team in the buildup to Super Bowl LI. While silent during much of the game, noting only how boring it was when New England was down to Atlanta, he perked up when the Patriots took the lead and won, tweeting "What an amazing comeback and win by the Patriots. Tom Brady, Bob Kraft and Coach B are total winners. Wow!"

It should be noted that very few, if any, pundits declared that the always dangerous Patriots were hopeless going into the second half, though coming back from 28 to 3 remains an outstanding, unmatched achievement in championship play.

As much as Kraft and Trump have supported each other in the media, Kraft has also supported Trump on the election trail, donating no less than $1 million to his campaign.

The current Patriot's Super Bowl ring is said to be the largest Jostens has ever created, a heavy swirl 10-karat white gold and over 280 marquise-cut and and round diamonds. This makes it somewhat larger and more valuable than the Super Bowl XXXIX ring Russian President Vladmir Putin straight-up stole from Robert Craft in 2005. That is, at least, one thing our president can lord over the Russian leader.

While Trump did precious little to help the Patriot's secure their win in February, he may have actually been capable of lending a hand. As former incoming White House communications director Anthony Scaramucci said of the president in a July press conference "He's the most competitive person I've ever met, okay? I've seen this guy throw a dead spiral through a tire."