Trump’s new Afghanistan strategy is not new, and it’s not a strategy

Being convinced by "his" generals to accept the status quo doesn't feel like a win to Trump, so he blames the media 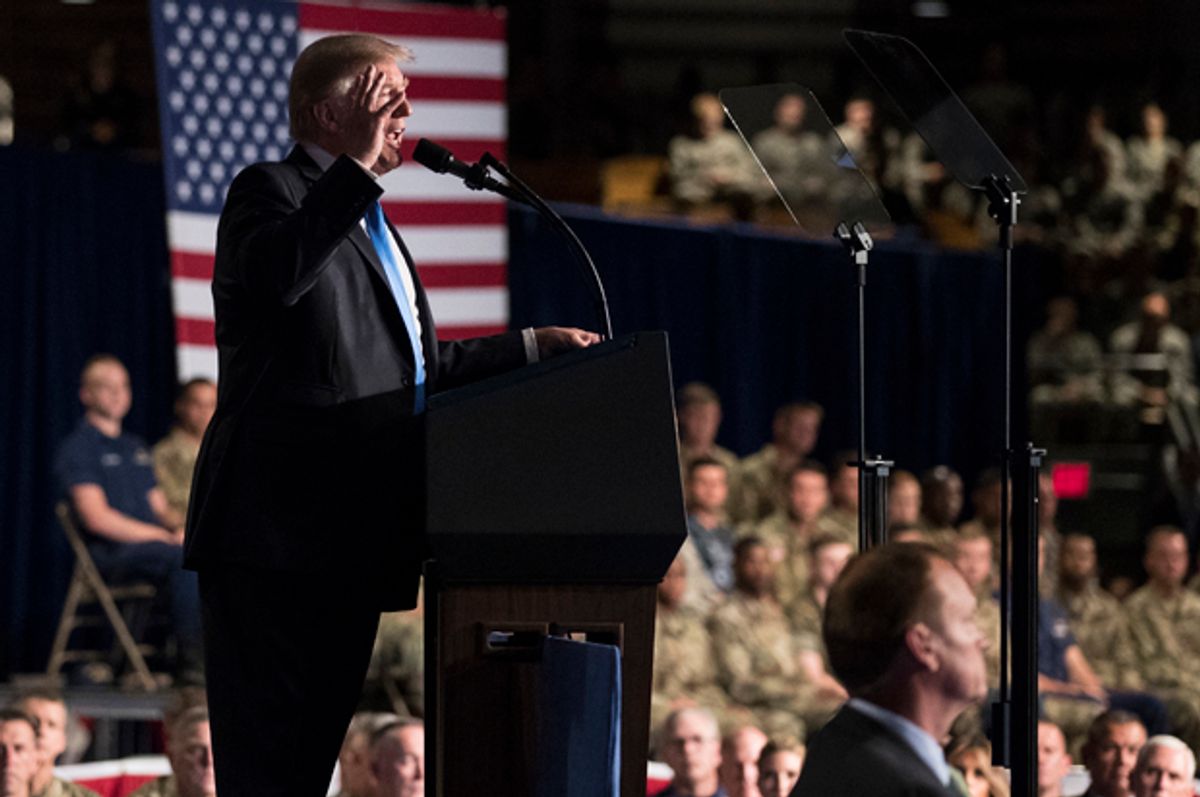 The best way to get an idea of what we’re dealing with in Afghanistan is from the air. I was lucky enough —  or unlucky, depending on how you see it — to fly from Bagram airfield to Kandahar and back when I was there over a decade ago. At least some of each trip flew over the area of Afghanistan just to the west of its border with Pakistan. Let me tell you what I saw from the air: mile after mile after mile of utterly and completely inhospitable territory. You can see something of what I saw if you go on Google Earth and click on the satellite view. The border runs north-south in a wandering manner along the tops of the ridges of mountains between the two countries. On either side of the border, fingers of valleys run west, or east, as the case may be, in the classical pattern of land formed by eons of erosion. Streams run down the valleys into rivers and along these streams, you can sometimes see small clusters of stone or mud buildings where the people of each country have formed communities to farm what little arable land can be irrigated from the streams coming down out of the mountains.

But most of the land on either side of the border is uninhabited: too mountainous, too distant from trading towns in either country to be of any use to live and farm on. Occasionally, and I mean very very occasionally, you can make out a dirt path or narrow road winding its way up one of the valleys, around mountain peaks, into new valleys, until finally the road switch-backs up the side of a mountain to a pass crossing the ridge along the border. But those dirt paths and roads are few and far between, and actual trading routes — roads that can be navigated by trucks and vehicles bigger than a jeep — cross the border only a few times in its 2,600 mile length.

I rented a four wheel drive Suzuki and hired a driver and a translator and drove from Kabul to Jalalabad, and from there north along the Kunar River to Asadabad and into the valleys running up from the river. Here is who I met and talked to: the Afghan people living there. That’s the thing about the border region of either country. Afghan and Pakistani people live in all of those hundreds of stream valleys running down from the mountains along thousands of miles of border. They’ve been living there for hundreds, sometimes thousands of years. And they’ll keep living there no matter what we do.

So when President Trump stood in a big auditorium at Fort Myer facing an audience of camouflage-clad military men and women on Monday night, that’s what he was talking about, whether he knew it or not, when he promised to put pressure on Pakistan to shut down Taliban and “terrorist” sanctuaries along the border with Afghanistan. “The killers need to know they have nowhere to hide, that no place is beyond the reach of American might and American arms.”

I’ll give you minute while you switch over to Google Earth and have a look at the satellite view of the border between Afghanistan and Pakistan. Anywhere along it at all. Okay, had a look? What do you think? See any hiding places? Like, maybe a few thousand wrinkles in the earth marking small valleys on either side of the border? The satellite view doesn’t provide a close enough look, but having driven along the border north of Jalalabad, I can tell you from eyeballing it, there are dozens of cattle and goat paths up there, and god only knows how many places to hide. One of the Afghan villagers I spoke to pointed across the Kunar River at the valleys (plural) we could see leading up toward the border and told me they were used every day in the smuggling of cattle between the two countries. It was a problem, he said, because recently some smuggled cattle from Pakistan had come across carrying mad cow disease which had infected some of the local cows and a whole bunch of farmers had to put their entire herds down. No place to hide? When you’ve got whole herds of cattle crossing the border regularly unimpeded, uninspected, unnoticed by either Afghan or American officialdom, I’d say that President Trump has given those soldiers in that auditorium a pretty tall mission.

It’s a mission that the 8,000 plus troops currently serving in Afghanistan and the 4,000 some rumored to be on their way, will never be able to carry out. So the speech that Trump gave on Monday night was like so much of his presidency, a toy speech about a war he knows absolutely nothing about. Hell, the generals who attended his big “summit” at Camp David a couple of weeks ago and “advised” him on his “new” “strategy” don’t know anything about it, either. You want to know how I know this? I’ll tell you.

Time-travel with me for a moment back to the war in Vietnam when one of the major problems we were said to have had over there was that the North Vietnamese and Viet Cong could use Cambodia and Laos as “sanctuaries” to hide from “American might and American arms.” So President Nixon ordered the infamous secret bombing of those two countries and carried out “incursions” into Laos, pursuing NVA and VC soldiers fleeing to their “sanctuaries.” Presumably, this is the secret portion of Trump’s “strategy” he wouldn’t tell us about on Monday night because, as he said, he doesn’t telegraph to his enemies what his plans are, like certain other presidents have done. Read here Obama, but Bush did the same thing.

How did that “strategy” in Vietnam work out for us? The last American combat troops left Vietnam on March 29, 1973, and we were out of there completely by April of 1975. South Vietnam fell to North Vietnamese troops shortly thereafter. So when Trump asserts, as he did on Monday night, “In the end, we will win,” he must be thinking of something along the lines of the same “winning” our sanctuary-attacking strategy achieved for us in Vietnam. That war, and the strategy which “won” it, was a counter-insurgency strategy, because that’s what we faced in Vietnam, an insurgency of Vietnamese citizens trying to drive us out of their country. It was such a huge success that the United State Army didn’t bother updating its take on counterinsurgency until they brought General Petraeus back from Iraq and installed him at the Command and Combined Arms Center at Fort Leavenworth where he and a small staff of officers wrote Field Manual 3-24 “Counterinsurgency.” And the strategy outlined in that 2006 field manual was such a success that we declared victory and pulled out of Iraq and let Isis take over practically the entire north of the country before re-committing troops in an attempt to take it back from them that is still ongoing. Our involvement in that godforsaken war in that godforsaken region of the world shows no sign of ending any time soon. Meanwhile, the counterinsurgency we’ve been running in Afghanistan has worked out just peachy for us, being that we’ve been there for 16 years, committing variously between a few thousand to more than 100,000 troops in our attempt to “win” the battle with the Taliban and whoever else we figure we’re fighting over there, without yet “winning” since Trump tells us as of Monday that “in the end” we’ll “win,” whenever “in the end” turns out to be.

There are about a hundred problems with Trump’s speech on Monday night, beginning with the fact that he read it in a monotone from a teleprompter showing words someone else had written for him, straight through the nonsense of the words themselves, to the manner by which the words were come by, to the so-called “war” the words were supposedly about, to the fact that something like the same speech was given at least a half-dozen times by Obama and Bush before him. We’re sending over extra troops! That’ll accomplish our mission! Whoa! Now we’re pulling out some troops! Because our mission is accomplished! Ooops! We’re sending in a few thousand extras because we forgot about that portion of the mission which actually wasn’t quite accomplished down there in Helmand Province or up there in Nangarhar Province . . . take your fucking pick.

But perhaps the biggest problem of all about Trump’s speech can’t be seen on Google Earth’s satellite view of the Afghanistan-Pakistan border. It can only be seen if you bother actually going there and look at the terrain with your own eyeballs and listen to the people with your own ears. The people in all of those steep, forbidding valleys? Those are the people we’re fighting over there. Maybe you watched the documentary “Restrepo,” about an American army unit assigned to a forward operating base in the Korengal valley outside of Asadabad, Afghanistan. Lots of shooting, punctuated by periods of boredom and goofing off and then more shooting. The people they were shooting at, described in the film as “Taliban” were the people living in that valley. They wanted the American soldiers out of their valley. Eventually, after many of them died and several Americans died, they got their way, just like the Vietnamese got their way almost five decades ago. They live up in those hundreds and hundreds of valleys, and there aren’t enough troops in the entire United States Military combined — Army, Marines, Navy, Air Force and Coast Guard — to patrol all those valleys and stop the citizens of either Afghanistan or Pakistan from doing what they want to do. If they want to smuggle cattle, they’ll smuggle cattle. If they want to grow poppies and smuggle opium, they’ll grow poppies and smuggle opium. If they want their women wearing burkas when they’re out in public, the women will wear burkas when they’re out in public. If they want to teach their children an extreme version of Islam, they’ll teach their children extreme Islam. If they want us to leave their valleys, then eventually we’ll leave their valleys, just like the soldiers on FOB Restrepo left the Korengal Valley, just like we left the valleys of Vietnam.

You see, that’s the problem with Trump’s speech on Monday. It’s not new — we’ve tried all this shit before and it didn’t work. It’s about Afghanistan, an impossible country of impossible terrain occupied by an impossible citizenry. And it’s not a strategy. It’s Vietnam all over again, and that didn’t work out so well for us at all, did it?