Trump in Arizona: Threats, paranoia and a dark lesson in white history 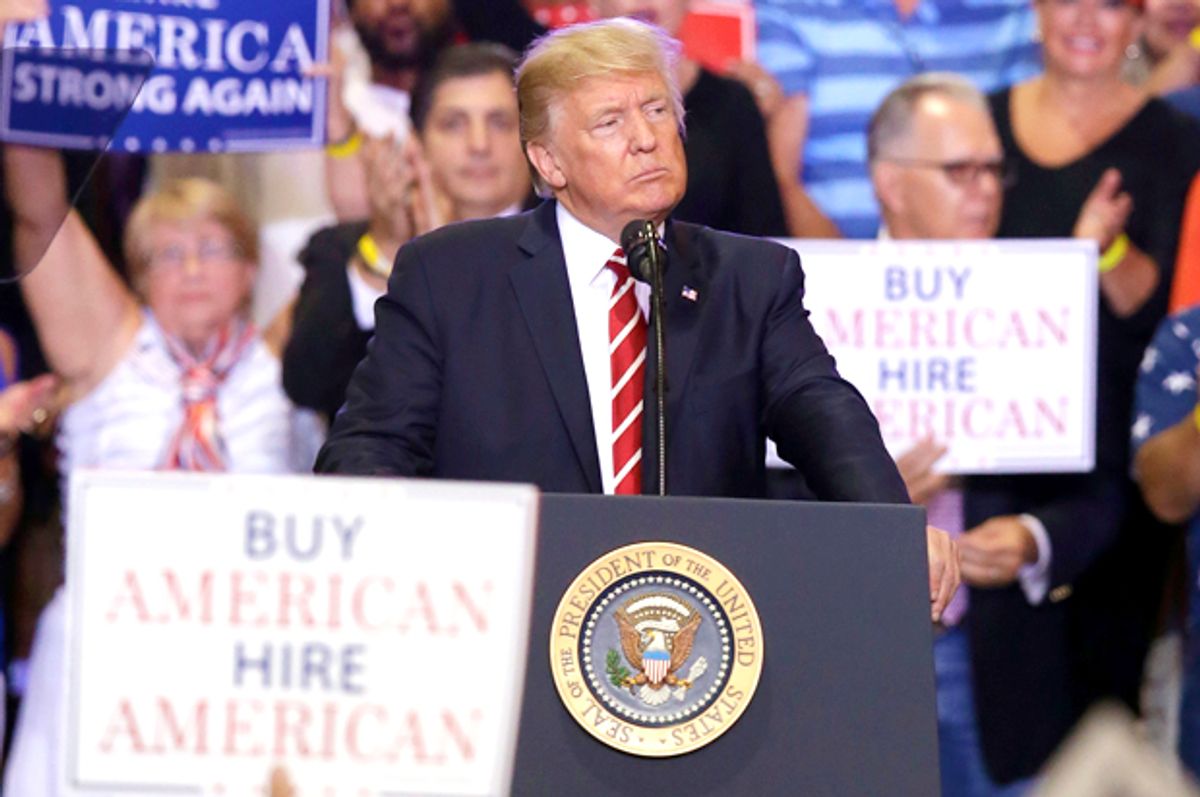 This is a tiresome cliché at this point ("Tonight he became president," "he's pivoting," etc.), and Rucker was, for good reason, immediately barraged with criticism. But when asked how long he thought this new Trump would last, he answered this way:

The assumption on the part of well, everyone, even those who complimented him for his presidential mien, was that teleprompter Trump was not permanent and he would immediately revert to his natural state: racist, immature and crude.

This is progress. It took most of the media and the political establishment more than two years to absorb the fact that the Donald Trump we saw on the campaign trail was the real thing. There was no hidden statesman, and his antics weren't an act. Just because he is capable of woodenly delivering an unconvincing speech written by someone else, it doesn't mean that he will stop tweeting every outrageous thought that passes through his mind while watching "Fox & Friends" during his obviously elaborate morning hair and man-tan ritual.

Trump went to Arizona solely to bathe himself in the febrile adoration of his followers after a tough couple of weeks defending Nazis from the hostile elites in Washington. Many people were aghast that he was going to hold one of his raucous campaign rallies in the wake of those odious comments about Charlottesville, a rally where he was sure to employ his usual divisive rhetoric, and protesters from all sides would undoubtedly gather outside and possibly mix it up with one another.

Phoenix Mayor Greg Stanton took to the pages of The Washington Post to beg Trump to let feelings cool before coming back to his town:

America is hurting. And it is hurting largely because Trump has doused racial tensions with gasoline. With his planned visit to Phoenix on Tuesday, I fear the president may be looking to light a match.

That’s why I asked the president to delay his visit. It’s time to let cooler heads prevail and begin the healing process. I’m not optimistic the White House will heed that call.

It did not. Trump chose Arizona for a reason. Last week he signaled that he planned to pardon notorious former Sheriff Joe Arpaio of Maricopa County (which includes Phoenix), a staunch Trump supporter who was recently convicted of criminal contempt in federal court for violating a judge's order to stop the racial profiling of Latino drivers. Trump obviously needed to get back in touch with his anti-immigrant base, where he feels he can let his racist flag fly more freely.

Trump touched a third rail in American politics with his defense of Nazis and got zapped. He was probably reminded by that experience that the politically correct right-wing way to express racist sentiments in America today is to slag immigrants and Muslims and let people sublimate their loathing for blacks and Jews within those categories. Everybody gets the message, and you don't have to overtly side with Nazis and the KKK.

Well, he did slag immigrants, as usual. And while he didn't literally pardon Arpaio, he made it clear that he intended to do so, saying, "I'll make a prediction, I think he's going to be just fine. But, but I won't do it tonight because I don't want controversy." He didn't say it was because Arpaio is an old guy who deserves mercy after years of public service or something like that. He said it was because Arpaio did the right thing in defying the court. So much for the president defending the rule of law.

In what was probably the most substantive piece of news, Trump said in passing, "If we have to close down our government, we're building that wall." (No "Who's going to pay for it? Mexico!" call-and response.) Government shutdown has been mentioned in the press as a possible Freedom Caucus tactic, and it appears the president is eager to join that nihilistic band. He said that the Democrats have "no vision for the country other than total socialism" and "maybe a step beyond socialism from what I'm seeing."

He never mentioned the 10 sailors who died two days ago in the Singapore straits, not even another "Oh, that's too bad," which is truly sad considering how often he uses veterans and active-duty military as favorite props.

But all that was just the tip of the iceberg. Trump gave a rousing 2016-style campaign rally that was as angry, divisive, unrepentant and crude as anything he did during the campaign. His attack on the media was fierce and sounded more threatening than usual. There was even a "lock her up" chant just for old times' sake. What set this rally apart from all those that came before was the 42 minutes he spent recapitulating his response to Charlottesville and throwing salt into the still raw wounds of that ugly episode. He just cannot leave it alone.

Trump tediously repeated verbatim what he insisted was his message of love and unity in the wake of that neo-Nazi and neo-Confederate rally, interspersed with lies about how the press never covered what he said. He completely elided the fact that he had blamed "many sides" and called those who marched with Nazis and the KKK "good people" and could barely find a moment to mention that the killing of Heather Heyer was "terrible" before moving on to how the media had unfairly crucified him. It's always all about him.

He declared that "they" will not stop until they take down the statues of George Washington, Abraham Lincoln and Teddy Roosevelt. (Apparently "they" are still looking for an excuse.) And then he went all in, saying: "They are trying to take away our history and our heritage."

Of course nobody's trying to take down statues of Washington, Lincoln or Roosevelt. There is a movement to remove the statues of Confederate leaders who fought a war to defend slavery, nearly all of which were erected many decades after the war was over as symbols of white supremacist rule over African-Americans. Our president stood before a crowd of cheering supporters and claimed that noxious "history and heritage" for them and for himself.

We always suspected that when he said "Make American Great Again" he meant "Make America White Again." After Tuesday night in Phoenix, there's no longer any doubt.