Virginia GOP tweet: Democrat "turned his back on his own family’s heritage" as Charlottesville covers up Confederate statue 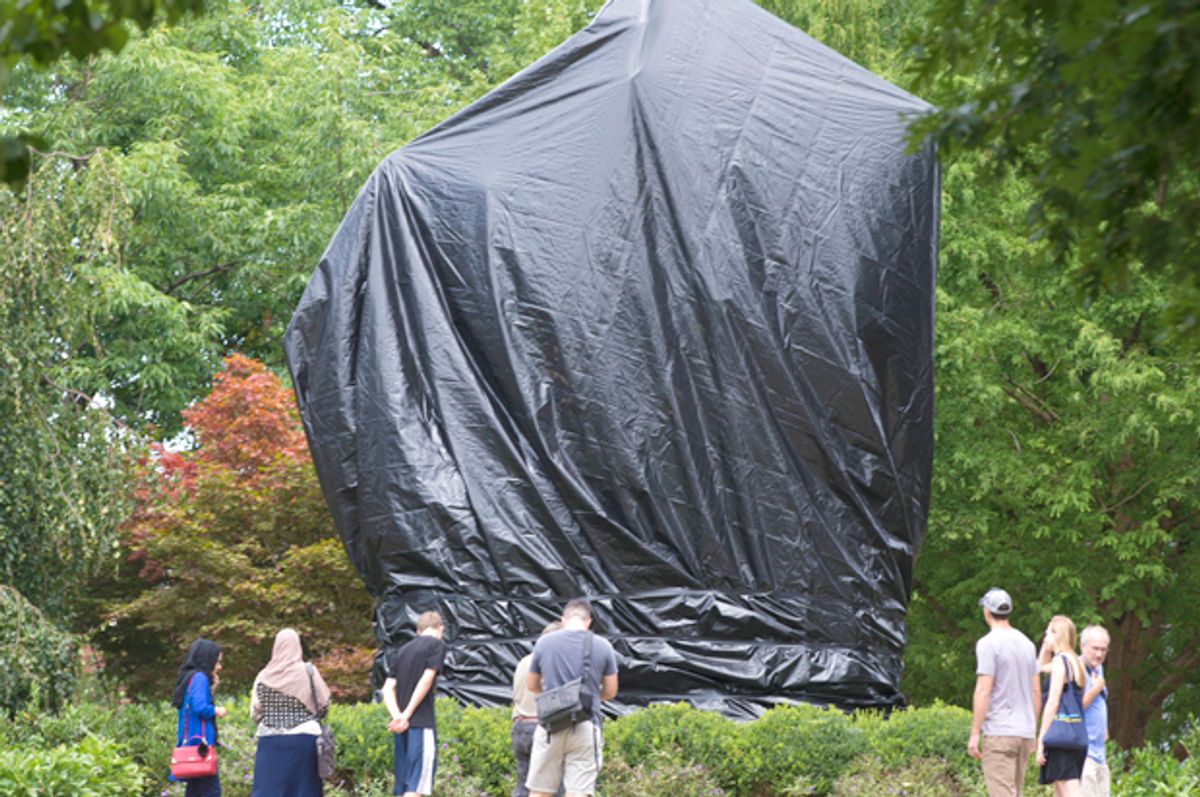 The Republican Party of Virginia said Lt. Gov. Ralph Northam had "turned his back on his own family’s heritage" on Wednesday after he called for the removal of Confederate monuments. According to The Washington Post, Northam's ancestors once owned slaves.

The controversial statue of Confederate leader Robert E. Lee in Charlottesville, Virginia was covered with a black tarp on Wednesday to honor Heath Heyer, the woman who was killed when a white supremacist mowed down counter protestErs at the "Unite the Right" rally on August 12.

In two separate tweets that have since been deleted, the Republican Party of Virginia wrote on Wednesday: ".@RalphNortham has turned his back on his own family’s heritage in demanding monument removal (1/2)." "Shows @RalphNortham will do anything or say anything to try and be #VAGov - #Pathetic 2/2," the second tweet read.

Northam quickly jabbed back at the tweets with one of his own. "I feel fine about turning my back on white supremacy. How does @EdWGillespie feel about the president's position?" Northam wrote, referring to his political opponent in the state's upcoming gubernatorial election in November.

In what was believed to be the largest gathering of white nationalists in the last decade, neo-Nazis, supporters of the Ku Klux Klan and far-right white supremacists descended on Charlottesville. Heyer was amongst the counter protestors who showed up to stand against the hateful bigots of the far-right who chanted "Jews will not replace us" and "blood and soil." The driver of the car that rammed into counter protesters, James Alex Fields, has since been charged with second-degree murder.

A small crowd of gatherers cheered on Wednesday as a workers covered the statue with a black tarp, which was done in memory of Heyer, according to NBC. The decision was made as a result of a unanimous city council vote on Tuesday. Some residents protested the move, one discounting Heyer's murder because she was "playing in traffic."

Another statue of Confederate Gen. Thomas "Stonewall" Jackson, was also covered in a drape, NBC reported.

President Donald Trump originally stated that there was violence on "many sides," and conveniently omitted those words while he rehashed his version of the events during a rally on Tuesday night in Phoenix, Arizona.

This also isn't the first time that the Virginia GOP has responded to the Charlottesville violence by distastefully lashing out a Democrat:

After criticism mounted Wednesday afternoon, Virginia GOP's tweet on Confederate statues was finally deleted and replaced with an apology: