Amazon's latest live action version of the superhero spoof takes on a darker tone, with varying degrees of success 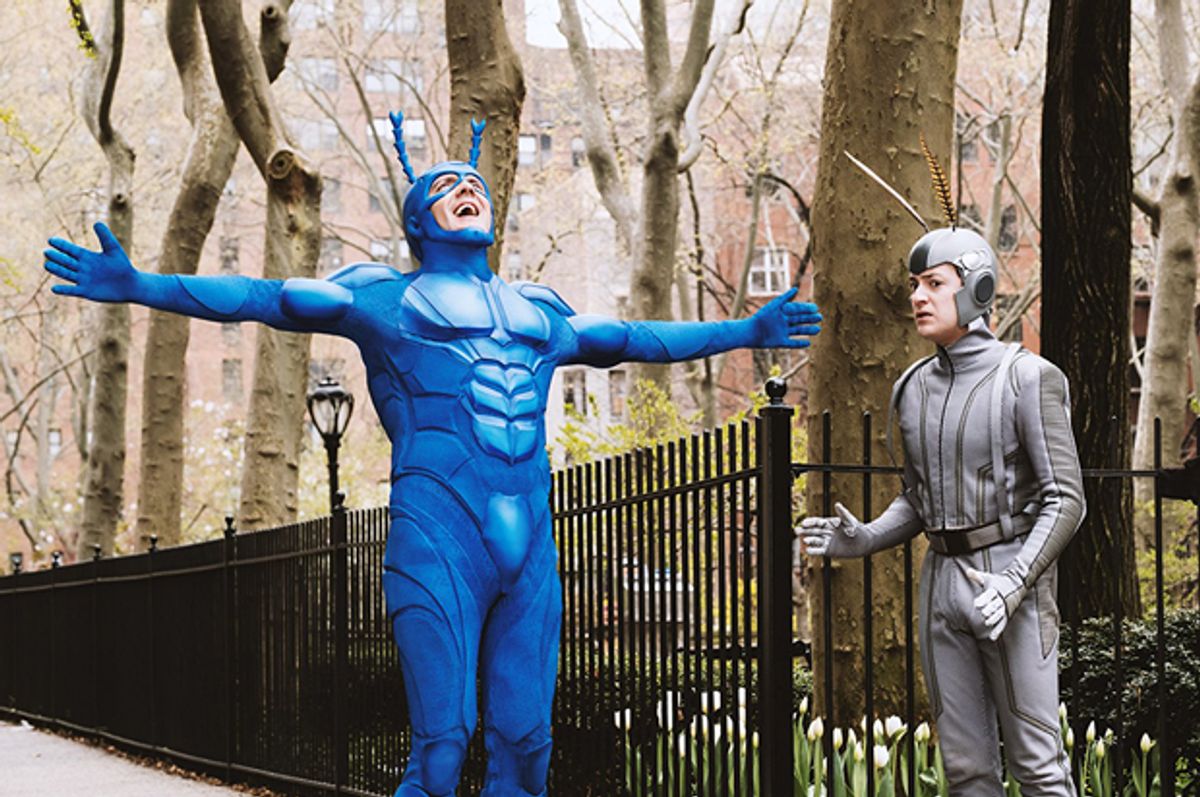 Peter Serafinowicz and Griffin Newman in "The Tick" (Amazon Studios)
--

The Tick, protector of The City, is nigh-invulnerable. Punches and kicks don’t affect him. Bullets bounce right off of his strapping frame.  Plummeting from a tall building doesn’t scare him; when that happens in Amazon’s latest reboot of “The Tick,” our might cerulean hero makes a flowery speech about the opportunities presented by falling. Not much fazes him, as a lightning-wielding villain discovers as she pounds him with enough high voltage to power a house.

Superpowered vigilantism is a booming business these days and entirely too serious. “The Defenders”? Severe. The trailer for Netflix’s upcoming solo outing for “Marvel’s The Punisher” is steeped in anger and agony.  Not even The Joker is much of a hoot these days.

In contrast, The Tick embodies the gleeful absurdism inherent in the whole concept of superheroes. His muscular definition is ridiculous. You want monologuing? The Tick has a talk locked and loaded to fit every occasion. And the evildoers in The Tick are outsized versions of annoyances we encounter every day. The electrical antagonist is Miss Lint (Yara Martinez), who channels her talent for attracting dust into bolts that can kill a common man but is easily undone by clouds of fuzz and dander.

The show’s evil overlord is a cranky old man called The Terror (Jackie Earle Haley), nemesis to The Tick’s sidekick Arthur (Griffin Newman). But The Tick, played in this version by British character actor Peter Serafinowicz, would probably identify evil itself as his archenemy. His aim is lofty in everything he does, and his memory is non-existent — invulnerability leads to a lot of knocks in the noggin — so why choose one target for justice when he can pick a fight with the source of all wrongdoing? Simple logic, chum!

Creator Ben Edlund birthed this universe in 1986, when he drew The Tick as a mascot in a comic book shop’s newsletter. His character is a response to the severity of the comic book genre in general, first purely as a spoof and eventually as its own goofy region of the crusader multiverse. Many characters in “The Tick” are a direct response to existing icons: The City’s version of Wonder Woman manifested as American Maid in the 1994 animated series, and in the first live-action version of “The Tick”” that ran on Fox in 2001, Nestor Carbonell starred as a brooding hero called Bat Manuel.

The lasting charm of this property, both on TV and the page is in its cheeky, loving homage to the world of superheroes even as it gently pokes fun at many of the genre’s tropes. Edlund also takes care to treats the term “comic” as an adjective as well as a noun, so that in every incarnation of “The Tick” the viewer never forgets that as powerful and athletic as these characters are, regardless of their ability to leap tall buildings in a single bound, they’re still doing it in Speedos and Spandex.

But the latest version of "The Tick,” available Friday to Amazon’s Prime subscribers, adopts a grimmer tone by beginning the story with Arthur’s origin story since, historically, The Tick never had one. Arthur, a nervous accountant, is a quivering wallflower who never escaped the shadow of significant childhood trauma inflicted upon him by The Terror.

Arthur never believed the common story that The Terror was destroyed by the world’s greatest superhero, Superian. His family dismissed his fear as a manifestation of post-traumatic stress disorder or another psychological malady, and his sister Dot (Valorie Curry) looks after him as much as she’s able.

Then Arthur comes into the possession of a bizarre moth suit, attracting the attention of some incredibly dangerous people.

All of this can be seen in Amazon’s pilot for “The Tick,” which debuted a year ago. But the series takes about four more episodes for Arthur to fully believe his eyes, to start working with his insistent justice-obsessed buddy and, within this existential trip, to discover what his mission is. Arthur’s stumbling is reflected in the season’s story development as well, with much of the action in the six episode made available for review spent meandering towards a point left unclear until the season’s midway point.

If “The Tick” swathed its struggle to find its way with a sufficient amount of humor, the initial awkwardness with its narrative would be easier to pardon. But in this version of “The Tick,” Edlund and his fellow executive producer David Fury, along with writers Jose Molina and Susan Hurwitz Arneson seek to incorporate a touch of modern superhero brooding into the story with only intermittent success.

This is a live-action version of a comic that revels in its cartoonish appeal, so the writers had to ground it in reality somehow. But as I wrote in an evaluation of the pilot, too much angst weighs down the casual juvenile nature of the series. And Serafinowicz inevitably pales in comparison to Patrick Warburton, who originated the live-action version of the character in 2001. However, I’d say the onus for making the character work lies more heavily on the writers and their ability to amplify the hero’s farcical nature. Serafinowicz has the look down and his intonation is perfect, but his banter is nowhere nearly as inane as it should be.

The saving grace of this new version of “The Tick” is its villains and its hyper-violent antihero Overkill (Scott Speiser), an answer to The Punisher. Overkill represents the part of fictional heroism positing that everything is solved by violence and the right technology, making him a fun contrast to The Tick’s old-fashioned mania for goodwill and politeness and non-lethal derring-do.

The energy of the series noticeably improves once he inserts himself into The Tick and Arthur’s adventures, in part because he provides a surly, pointed balance to our soft-hearted heroes. Ideally, though, The Tick and Arthur should stand alone in their world and be enough to hold the center of their own series. Maybe that happens in the back half of this 12-episode first season.

Too much darkness dominates our worlds right now — the real one, as well as the universes drawn by Marvel, DC and other publishers. There should always been room for the like of “The Tick” and its a grinning, bouncy servant of goodness, hungry to sear the red meat of evil on the slick buttery surface of smoking hot justice. Hopefully Prime subscribers and Amazon itself will be patient enough to allow this new take on the blue-suited hero to grow into the mantle of its potential.