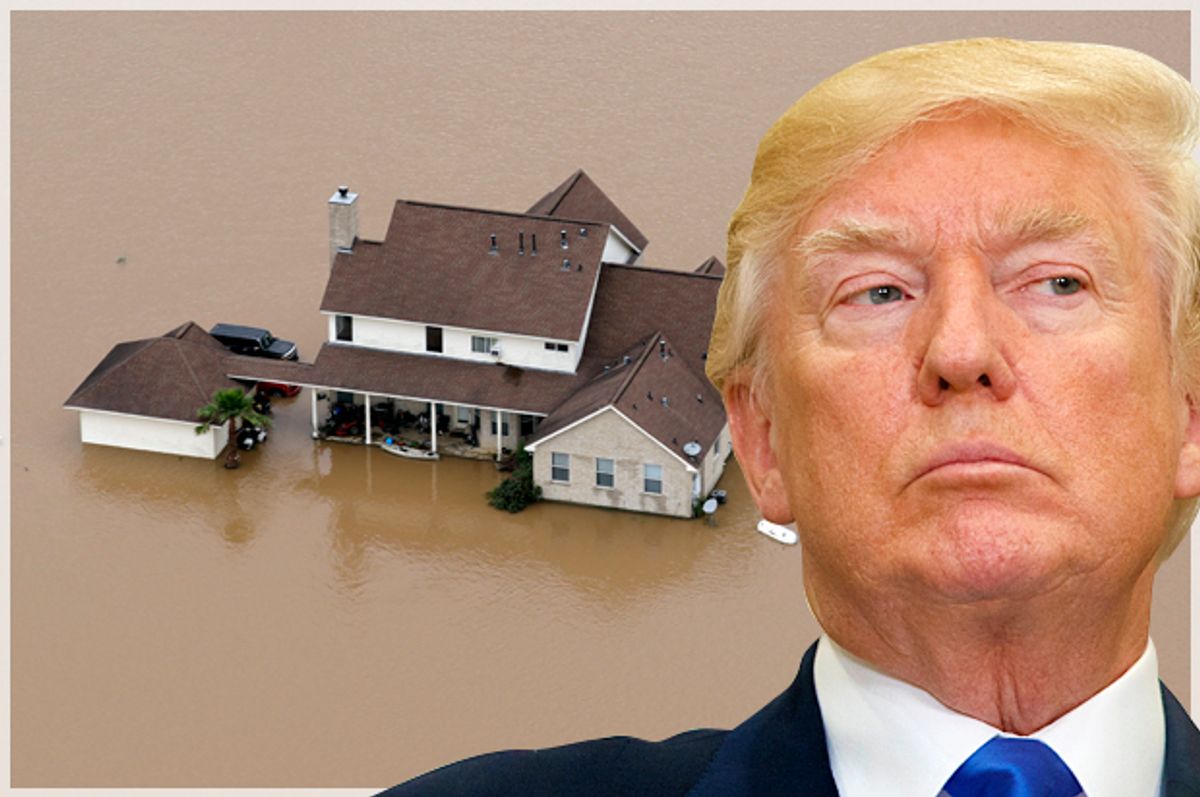 “It’s about to get real,” Matt Drudge, perhaps the president’s most powerful media backer, ominously tweeted on Thursday. The Drudge Report founder, who seldom uses the president’s preferred social media platform, took to Twitter to get his message out: Donald Trump is “facing [his] first serious crisis with Hurricane Harvey.”

The storm, which has now strengthened to a category 1 hurricane, according to the National Hurricane Center, is expected to hit the middle Texas coastline on Friday. Houston, the country’s fourth most populous city, sits directly in its path. The Weather Channel reported Thursday that the storm "is strengthening rapidly, and is poised to bring a combination of prolific rainfall, dangerous storm-surge flooding and destructive winds to areas near the Texas Gulf Coast beginning Friday, before taking a strange, meandering path next week."

Hurricane Harvey is predicted to be the first major storm in a decade -- and Trump just tweeted a useless promotional ad in preparation.

According to the White House, Trump was briefed on the government’s hurricane preparation efforts earlier this month, but his campaign-style commercial -- fitted with a dramatic soundtrack -- failed to convey any of that information to worried residents in the storm’s path. His tweet did not include basic information, like who is in danger, how to be prepared or what the government is doing to prepare.

Oil refineries and terminals in Texas have been forced to shut operations ahead of landfall, sending gasoline stocks soaring for the first time in more than a year. But even as several Gulf states braced for the first major hurricane to make landfall in more than a decade, Trump’s newly minted head of the Federal Emergency Management Agency was busy pushing for decreases in federal disaster relief that would make local governments pay more when a hurricane hits.

It is the peak of hurricane season, yet FEMA Director Brock Long is currently on a campaign to rewrite the federal flood insurance program that 5 million Americans rely on.

"We're particularly worried about the remainder of this hurricane season," Louisiana Gov. John Bel Edwards said in a press conference following a meeting with Brock earlier this week. Hurricane Harvey is projected to cause major devastation to the state that was rocked by Hurricane Katrina more than a decade ago.

While FEMA has said it is sending thousands of meals, tarps and liters of water to Randolph Air Force Base ahead of Hurricane Harvey's arrival, its director told Bloomberg News this week that one of his top priorities ahead of September is pushing for an overhaul of disaster relief.

"I don’t think the taxpayer should reward risk going forward," Long said in an interview in his office at FEMA’s headquarters in Washington. "We have to find ways to comprehensively become more resilient."