Two boring governors walked into a bar, and nothing happened afterwards 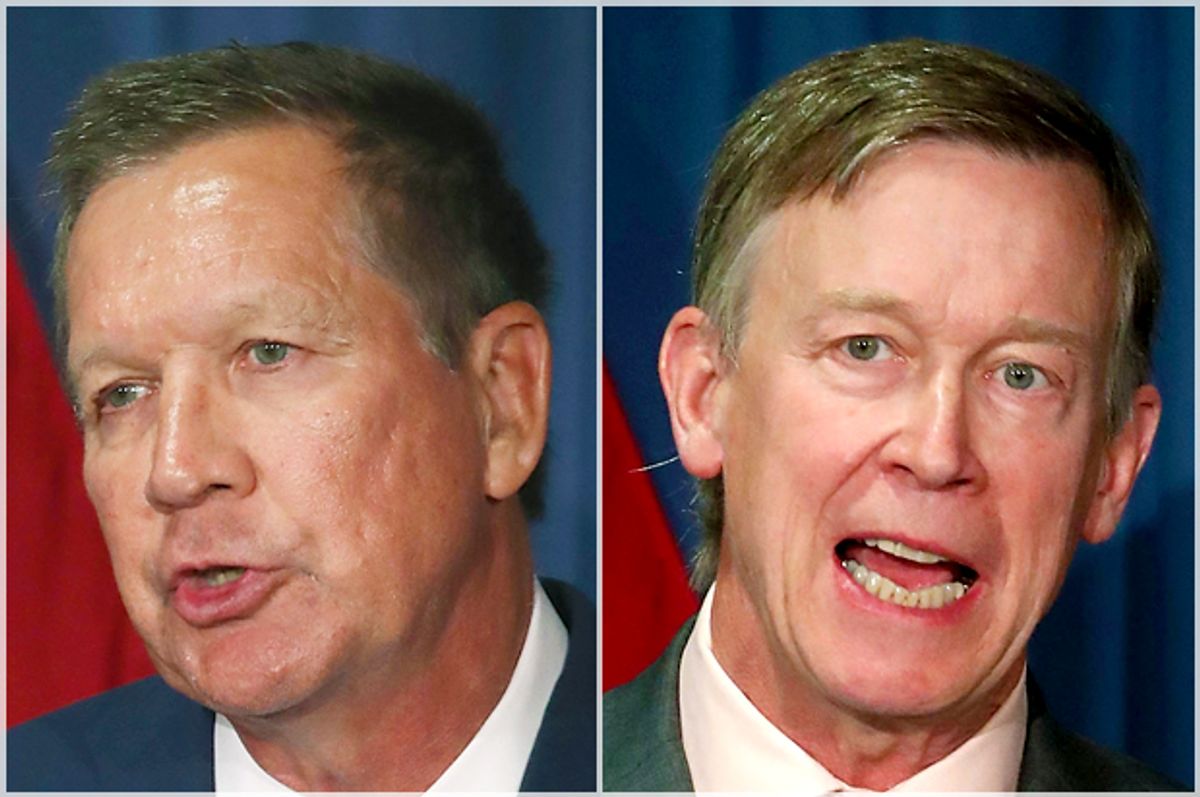 Every so often, political journalists love to get behind politicians that the rest of America has no interest in simply because the pols in question love talking about bipartisanship and how can't we all just get along. Never mind their actual policy views, those are irrelevant.

We've seen this before with media-induced boomlets about former New York mayor Michael Bloomberg and before that, the dog-and-pony show of Ross Perot. Back in the early 2000s, the media was even promoting the idea that Donald Trump might run for president. That last one actually came true, of course.

With the exception of Trump (who had a very different public perception in those days), one thing the various media candidates have had in common is that they have no charisma to normal people. That might explain the recent hype surrounding the idea of Ohio Gov. John Kasich and Colorado Gov. John Hickenlooper potentially teaming up on an independent bid for the presidency in 2020.

The idea was first reported by Mike Allen of Axios and seems to have been cooked up by Kasich's long-time political adviser John Weaver, who was behind the losing presidential bids of John McCain — twice — and John Huntsman.

According to Allen, the idea behind the virtually unknown Colorado Democratic governor teaming up with the barely known Kasich is based on the premise that "National Dems so far haven't capitalized on Trump's record unpopularity and obsession with his base."

As the Democratic National Committee's recent dismal fundraising has shown, there's really no disputing that the party elites aren't trusted by their base. But on the other hand, Kasich his hardly positioned to win liberals' affections.

Besides the fact that he has railed against Obamacare for years, Kasich also has a record on abortion that could not at all be characterized as moderate, as Salon's Heather Digby Parton has noted. In 2015, he proposed kicking pregnant women off of Medicaid if they had incomes between $16,000 and $23,000. Last year as he ran for president, Kasich told LGBT people who had been discriminated against by a business to "get over it." Liberal education activists likely also would not be fond of the fact that Kasich cut almost $2 billion from Ohio's public schools in his first budget.

Even if Kasich were to somehow reverse these stances, how many Democrats would ever want to vote for a third-party candidate and run the risk that Donald Trump would be re-elected? The guy specializes in highly motivated pluralities. An independent centrist ticket would be exactly what Trump would love in 2020.

Put simply, Kasich wouldn't get much of any Democratic votes in his column. Given how strong Trump's approval ratings among Republicans are continuing to be, Kasich wouldn't get much of that vote either. As for Hickenlooper, no one bases their presidential vote on who his or her running mate happens to be. In a poll taken a month before last year's election, 40 percent of Americans could not name Trump's running mate Mike Pence.

The numbers simply aren't there for a Kasich-Hickenlooper ticket. More than likely, however, this whole thing is just a ruse to keep him in the national news. He is still flogging a low-selling book, after all. Former Cleveland Plain-Dealer reporter and current BuzzFeed scribe Henry J. Gomez placed the scuttlebutt in the proper context earlier today:

Enjoyable fan fiction? Wouldn't that require either Kasich or Hickenlooper to have actual fans?