Despite declarations to the contrary, black people watch "Game of Thrones"

Yes, the series is problematic in its depictions of people of color. But so is most of TV 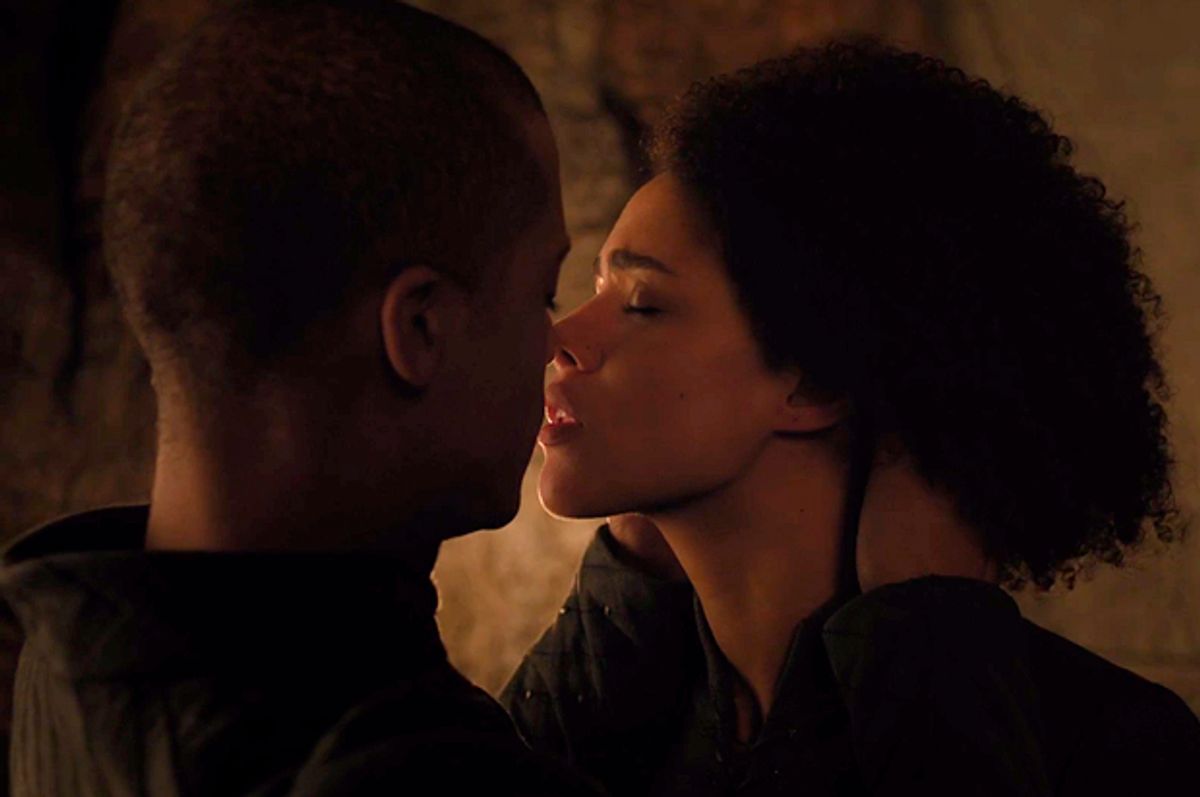 Long ago, in a time before time was counted . . . on portable phones . . . identifying as a black nerd or geek used to be one of the surest paths to social banishment. T’was a fate common to many nerds and geeks, but for nerds and geeks of color, harboring a love of swords and sorcery ran the risk of effectively placing oneself on the outer edges of the ostracized. It meant hearing, over and over again, that what we were into was some white people sh*t.

HBO’s “Game of Thrones” fits into this category purely based on visual evidence. Its focus on Westeros, a land author George R. R. Martin modeled upon Europe. The main characters are played by white actors. Characters played by actors of color hail from Dorne, the Westerosi version of Andalusian Spain and southern Italy, and Essos, viewed as an exotic land filled with silks and spices and brothels and legalized slavery.

This is a common reason given by people of color for not watching “Game of Thrones,” and it’s understandable. But as the show’s popularity has exploded over the past couple of seasons, and especially in the wake of the #NoConfederate controversy, I’ve been asked by other black people as well as a few “woke” white folks how I can be a fan of a series that has very few deeply developed characters of color.

My answers are simple, and straight, and deeply complex all at once. I watch because it’s a tremendously entertaining, visually seductive work that inspires conversation on multiple levels, both with regard to its successful aspects and it myriad flaws. I watch because those dragons are extraordinary, and there’s a thrill in seeing a woman command and ride them. I watch because I’ve grown emotionally attached to many of its characters.

The most obvious reason I watch is because I love television. And as a minority, part of loving television is recognizing the truth that TV is a medium that has long favored the stories of white people.

Besides, contrary to offhanded assertions some people have made (including radio host Tom Joyner) plenty of black folks watch “Game of Thrones.” There’s an active viewership devoted to communal viewing and conversation percolating under the Twitter hashtag #DemThrones. In fact, more people are watching "Game of Thrones" in season 7 than ever before; episodes draw an average audience of 29.3 million, a count that includes the audiences for their broadcasts on the HBO channels as well  as DVR replays, on-demand viewing and streaming viewership. (The most recent episode, "Beyond the Wall," drew 10.2 million viewers in its 9 p.m. time slot, making it the second-most-watched episode in the series’ history.)

Not everyone watches it religiously, mind you. “I'm not, like, a ‘Game of Thrones’ fanatic,” said hip hop icon and “NCIS: LA” star LL Cool J when the question was put to him at a recent CBS event. “That's just the honest truth. But for me to go in knowing it's fiction drives me” to watch, he explained, “because then it becomes about somebody else's point of view. That's a little challenging but it’s pretty interesting, it’s pretty cool.”

Orlando Jones, a man who earned geek ambassador status due to his work in “American Gods” and “Sleepy Hollow,” watched the series as part of his job, having worked in the past with “Game of Thrones” star Nikolaj Coster-Waldau and because he admires Peter Dinklage’s work.

“I came to ‘Game of Thrones’ going, it has the perfect murders-to-beheadings ratio,” Jones joked. “I’m like,'OK! Bare breasts, beheadings, breasts! So that's what they're watching.’ That was my initial instinct.”

He added, “If I started discluding content solely based on its underlying, shall we say, lack of sensitivity to disenfranchised groups — of which I am one, but I'm not the only group that they have literally no sensitivity to — I would have to disqualify way too much content to be in the entertainment business."

On the other end of the “Game of Thrones” fan spectrum is Aisha Tyler, co-host of “The Talk,” the voice of Lana on FX’s “Archer,” and proud geek. “Human stories are human stories. And ‘Game of Thrones’ isn’t set in any part of the Earth as we know it. It’s a fantasy show,” declared the geek khaleesi. “If you decided not to watch a TV show unless it was completely devoid of racial tropes, you’d have about one show to watch.”

As a rebuttal to the critique of the whiteness of “Game of Thrones,” Tyler recalled the prominence of Salladhor Saan (Lucian Msamati) the wealthy pirate for hire who lent his ships to Stannis Baratheon’s cause in the doomed attack on Blackwater. He had considerable power, she pointed out.

That’s true. The series also cast a black actor, Nonso Anozie, as Xaro Xhoan Daxos, a self-made nobleman in Qarth, and DeObia Oparei as Areo Hotah, the head bodyguard of Prince Doran Martell. The Dornish contingent is represented by actors hailing from a variety of countries, including Chile, Sudan and Australia, claiming descendance from Indian, Singaporean and Maori culture.

Those characters are all dead, by the way.

Nevertheless, “I don’t think that it promotes racial tropes any more than a lot of other shows, which are much more relevant to our current situation on the planet today, because ‘Game of Thrones’ is some made-up sh*t,” Tyler said.

Michael Harriot might beg to differ with that opinion. Harriot covers culture for The Root and authored “The Black Person’s Guide to Game of Thrones,” a widely-circulated humorous breakdown that speaks to all of the series' racially fraught depictions as well as spelling out its appeal.

“'GOT' is basically an all-encompassing analogy for white America and should be studied in the same way seventh-grade English teachers make their students dissect 'Animal Farm' or 'Lord of the Flies' to understand society,” Harriot observes in the piece.

He admitted in a recent phone call that while he’s always been a nerd, he didn’t go full “only black person at ye olde Renaissance Faire” like yours truly.

However, if an aversion to swords and wizards and other fantasy tropes is indeed a black thing, he has a theory about that. “Part of the idea of fantasy and the notion that it's always been a white thing, is because the imagination that engenders it has to be cultivated by a mind that doesn't have to really worry about real world sh*t,” he said. “ . . . If you have to worry about the economy and employment and racism and prejudice and going to school and discrimination, there's little space in your mind left for fantasy and imagination. Even the little space there is, it usually doesn't wander as far off.”

There’s also the factor that the majority of the fantasy genre’s greatest hits — “The Sword and the Stone,” J.R.R. Tolkien’s “Lord of the Rings” franchise, C.S. Lewis’ “Chronicles of Narnia” — are influenced by medieval European myths and legends, which have been typically interpreted by Hollywood as populated by white people.

“Game of Thrones” represents the height of fantasy’s mainstreaming — more than the likes of the “Harry Potter” franchise or Peter Jackson cinematic adaptations of Tolkien’s work. Those examples actually demonstrate how conventional these one-time outsider genres have become. Reading J.K. Rowling’s books was trendy for all ages just a few years ago, whereas in the 1980s or even the 1990s, being a black girl caught with your nose in “The Two Towers” was as good as a hanging a sign around your neck that read, “Why Yes, Do Stuff Me Into an Open Locker of Your Choosing.”

So cemented are the classic concepts about what these imaginary worlds look like, whether in Martin’s brain or HBO’s televised manifestation of his story, that breaking the wheel of cultural depiction does not occur to most of the writers and directors of such series.

That was clear from the very beginning of the series, when Daenerys Targaryen’s wedding to her Dothraki warlord husband Khal Drogo was marked by what can only be described as a National Geographic-themed nightmare. Dothraki weddings, Ser Jorah explains to the horrified khaleesi, are exciting affairs celebrated by drunken brawls to the death and animalistic screwing. These are the first images of brown people seen in the series, and it turned my stomach.

I viewed those troubling  images and every one afterward, processing what each one signifies. The Unsullied, for example, are elite warriors, feared across Essos and famously relieved of their genitalia at a young age. In the series, they’re depicted by black and brown men, and led by a commander named Grey Worm (Jacob Anderson).

Grey Worm’s lover is Missandei (Nathalie Emmanuel), also a former slave. She also speaks many languages and is the diplomatic interface between Daenerys and much of the world. Daenerys, played by Emilia Clarke, is quite literally the whitest white woman in this world — pale skin, white hair and possessed of a Louise Linton level of confidence and entitlement, albeit with 100 percent more empathy for the poor and exploited. The first faces she shows to those who would stand against her, her vanguard, are black and brown ones.

Of course, there are positive and negative ways to interpret that view. Missandei is a partner to Daenerys. She’s also subservient, only now by choice.

Taking all of that into account, Jones also pointed out that in the larger scheme of things, “'Game of Thrones,’ frankly, is the least of my issues when we start to talk about representation — how women, how people of color are treated and frankly, how 20 percent of the population is treated. And by that I mean people who are disabled.”

In that sense, Jones credits Martin and “Game of Thrones” for its rounded rendering of Tyrion Lannister. “Peter Dinklage is not a second-class citizen in that show,” the actor pointed out. “His story is about his second-class citizenship in his family, and those elements. But Tyrion is a full-blown character . . . you've got to give 'Game of Thrones' a pass on some level simply because of that.”

This is essentially how fandom works for any minority viewer — or, really, any viewer connecting to entertainment. We absorb what’s presented not without question but at least with a level of engagement that maintains our awareness of problematic elements. It frustrates and fascinates us and even in that way, it connects us to worlds and views beyond our individualized screens.

“If you’re frustrated about diversity in casting, tell people not to watch ‘The Affair,’” Tyler deadpanned, adding, “Live your life.”