Operation "Obama Eclipse": Trump tweet confirms his singleminded obsession with that other president 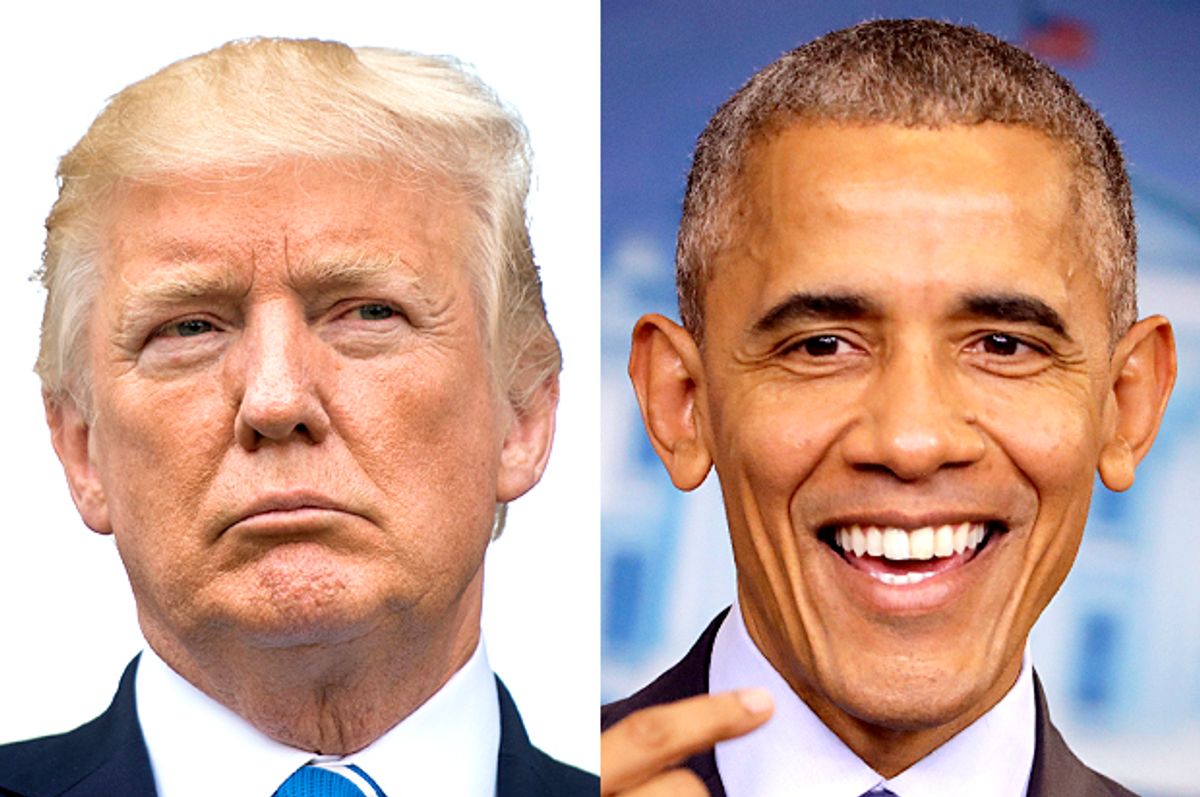 One of the most frustrating aspects of punditry, circa 2017, is how everyone involved has become the Donald Trump Whisperer, endlessly trying to plumb the depths of the imperious orange monstrosity's mind. Psychoanalysis of politicians is a waste of time for those of us unblessed with telepathy in ordinary circumstances. With Trump, it's a particularly useless way to wile away our short hours on this planet. The man's mind is only an inch deep. There are dog breeds with more complex and nuanced thought processes. Trump is a blustering bully and a racist, and there really isn't much more to the man.

We were all gifted with yet another reminder of this on Thursday, when Trump, in an act that's beneath the typical 14-year-old Snapchat aficionado, retweeted this meme:

For those who wonder why such a selfish, intellectually constrained individual would want to run for president, well, he just told you: He was angry that a black man, one who is superior to him in both morality and intelligence, got a job that had previously only been held by white men. It made him so angry, in fact, that Trump completely rearranged his entire soft, easy life in a pitiful effort to erase that fact.

But, as many an astute reader of metaphor pointed out on Twitter, this meme had an unintentional meaning. The solar eclipse was an event where a cold, dead rock temporarily blocked the life-giving light of the sun. That is a far more apt metaphor for how history will regard these two men than Trump, or whatever Russian bot/Trump fanboy created this meme, intended.

Trump's racist obsession with delegitimizing Obama has now lasted longer than at least one of his marriages. In 2011, he started flogging the "birther" conspiracy theory, using his status as a reality TV show star to inject insinuations into the mainstream media that Obama was not a native-born American. A month after Trump started pushing this idea, which is rooted in the racist refusal to accept black Americans as full citizens, Obama released his long-form birth certificate. This didn't slow Trump down, however, because birtherism was never about facts. It was just an excuse to push the narrative that is dear to Trump's heart: A black president cannot, by definition, be a real president.

Now he's in the White House, but Trump's obsession with un-making Obama's presidency hasn't let up one bit. Earlier this month, Alberto Nardelli of BuzzFeed reported that European diplomats understand Trump's hatred of Obama as the central organizing feature, and perhaps the only relevant aspect, of his foreign policy decision-making.

“It’s his only real position,” one of the diplomats told BuzzFeed. “He will ask: ‘Did Obama approve this?’ And if the answer is affirmative, he will say: ‘We don’t.’ He won’t even want to listen to the arguments or have a debate. He is obsessed with Obama.”

As Jack Moore at GQ observed, a view of Trump's presidency proves this diplomat's assertions right. The Paris climate agreement, various trade deals, the Clean Power Plan, transgender people in the military -- the list goes on. Some of these items were priorities for the Republican Party; some, such as the transgender ban, were not. What they all have in common is that Trump's decisions attempt to undo whatever Obama, and the current president's only important goal is to erase from history the fact that we ever had a black man in the Oval Office.

He will fail, of course. Trump doesn't have a time machine and even more to the point, every day he is in office, the country longs for Obama more and more. But it's truly astounding the amount of damage Trump will do with his prime directive as: Hate Obama."

The attacks on national parks and monuments are perhaps the most telling example. National parks are generally popular, outside of a few far-right circles out west. But because Obama expanded the acreage of national monuments and the protections for species within them, the Trump administration is putting a surprising amount of energy into undoing regulations that otherwise would be largely uncontroversial.

It's not just that the Trump administration is resizing the Obama-designated Bears Ears National Monument, a symbolic effort to cut Obama down to size. Trump also ended an Obama-era ban on water bottles in national parks, against the wishes of roughly everyone but bottled water companies, for no reason seemingly beyond just wanting to undo everything Obama did.

But perhaps Trump's most stunning move was the decision to back a bill that would legalize shooting bear cubs in their dens, by censoring National Park officials who object to it. Shooting baby animals while they sleep is pointless, inhumane and cowardly, so no wonder Trump is OK with it. But it was also — surprise, surprise! – banned in Alaskan national preserves by the Obama administration; so by the "hate Obama" rule, even sleeping baby bears have got to go.

The various stripes of white supremacists who gathered in Charlottesville this month and were defended later as "fine people" by Trump, were recorded chanting, "You will not replace us" — a distillation of this fear that sharing power with women, religious minorities, LGBT people and people of color will somehow result in white men being pushed out. It's no wonder, then, that Trump was moved to defend these men. His entire presidency has been gripped by the same racist resentment that led those guys to pick up their torches in the first place.