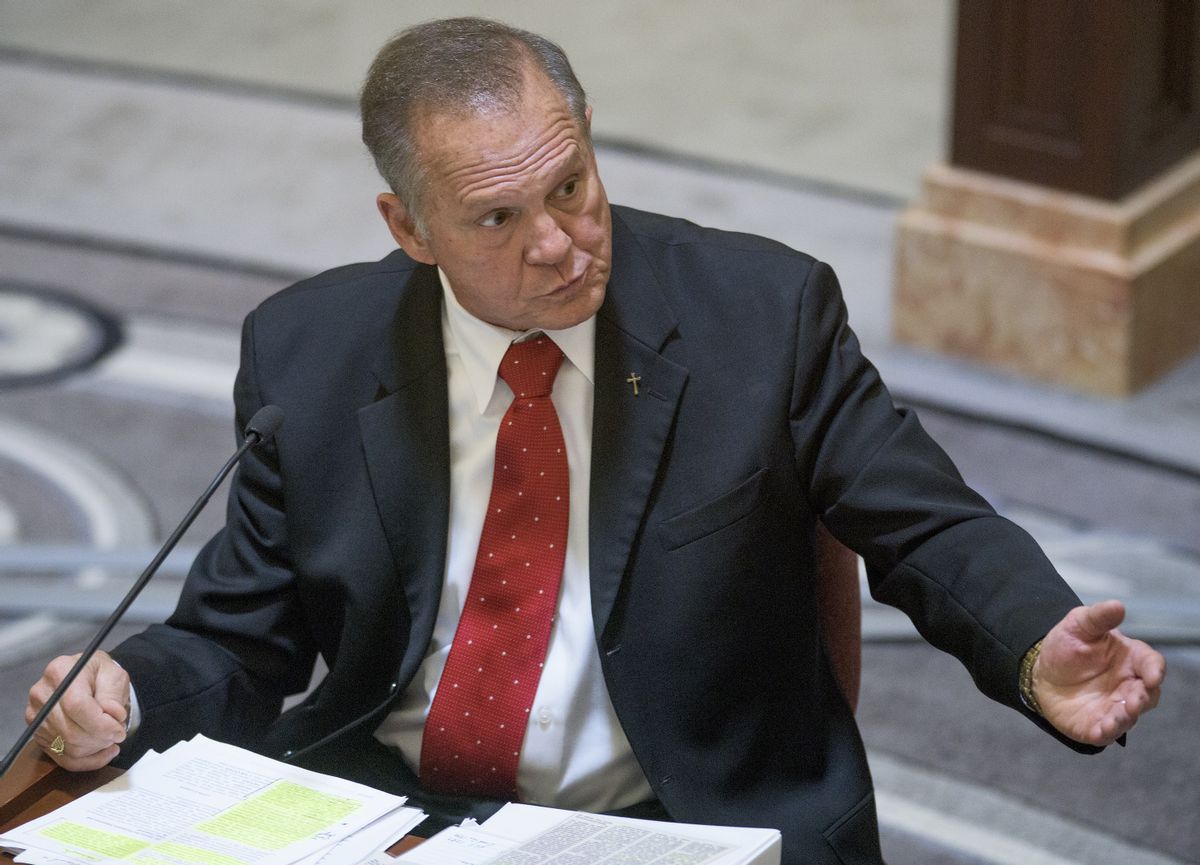 Roy Moore's brand of politics was in many ways a forerunner for President Donald Trump. Loud, opinionated, and without a care as to whom he may offend, the former state judge has been a political figure in Alabama for decades, famous for his desire to post a giant Ten Commandments diorama in his court room and his refusal to obey the Supreme Court's ruling on same-sex marriage.

It's becoming increasingly clear that Moore's Christian nationalist cultural populism is going to enable him to become the GOP's choice in a special election to fill the U.S. Senate seat vacated by Attorney General Jeff Sessions.

With Republican voters primed by Trump to embrace a white Christian identity politics, Moore's old-time blend of preaching and politicking looks like it has more power than the president's endorsement of Moore's rival, Luther Strange, the man who was appointed to fill the seat temporarily until the general election in November.

Moore has led most polls throughout the race. In the Aug. 15 first round of the primary, he finished with 39 percent of the vote, 8 points higher than Strange. The race is headed into a second round of balloting Sept. 26 because Moore was unable to win more than 50 percent of the vote.

"We need to go back to the recognition that God's hand is still on this country and on this campaign," he said. "We must be good again before we can be great. And we will never be good without God." The former judge has been twice removed from the bench by ethics courts for his refusal to obey higher court rulings.

Trump appears to have endorsed Strange as a favor to the GOP Senate leader Mitch McConnell, but with the president embroiled in a public war against Republican congressional leaders all bets are off as to what Trump may do next. On the first night of voting, the president took the unusual measure of congratulating both Moore and Strange, despite the fact that he had endorsed Strange.

Hours afterward, presumably after receiving some panicked calls McConnell, Trump tweeted out what he should have said initially.

Moore has also been explicitly running against McConnell, arguing, as many conservative activists have claimed for many years, that the GOP leader suppresses far-right policy ideas. Despite McConnell's consistent skill at foiling Democrats in the upper chamber, many conservative voters and activists believe him to be ineffective and cowardly. After Senate Republicans gave up on repealing the Affordable Care Act, Trump seems to have embraced this critique.

For his part, Strange has been caught in the middle of the two men. In an advertisement, he tried to paint himself as one with Trump.

“Others attack our president,” Strange said in the message. “I’m fighting with him to drain the swamp and repeal Obamacare.”

The winds may be shifting even further in Moore's favor. On Thursday, former Republican vice presidential nominee Sarah Palin, still a favorite among Christian nationalists, announced that she was endorsing Moore. She joins several hardcore conservative groups who are seeking to defeat Strange as a blow to McConnell.

On Tuesday, far-right radio host Mark Levin told his audience called McConnell a "mob boss" who deserved to be brought to his knees.

“Mitch McConnell may think he’s a mob boss, but we don’t have mob bosses in the United States Senate, in the greatest Republic on the face of the earth,” Levin said. “It’s time that we make this mob boss heel! It’s time that we bring him to his knee, like Kaepernick!”

Friday afternoon, the Washington Post reported that Trump is now considering pulling back from the race, not rescinding his endorsement of Strange but becoming less of an active participant than he had been in the first round of the primary when he had recorded a voice message that was sent to Alabama voters via telephone on Strange's behalf.

During his own campaign, Trump was generally uninterested in appealing to conservatives, even saying several times that he did not consider himself one but since taking office, he has strongly tried to adhere to the concerns of base Republican voters. With Palin going her own way and Moore continuing to hold the lead, there's a strong indication that Trump may decide to cut back so as to distance himself in the event that Strange loses the race.