Obama abandoned the goal of nation building after billions of dollars were spent and 2,400 American lives were lost 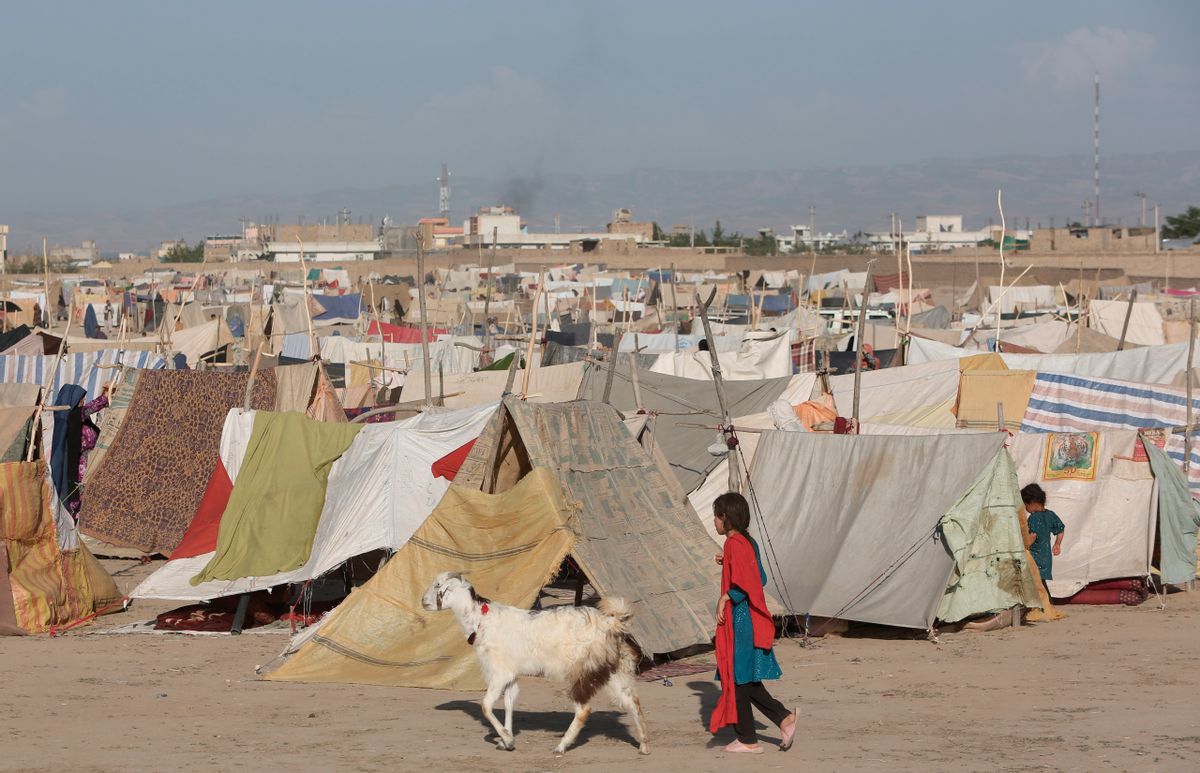 In this Thursday, May 21, 2015 photo, an Afghan refugee girl walks with her goat at a camp on the outskirts of Kunduz province, north of Kabul, Afghanistan. When the Taliban descended a month ago on Dam Shakh, a hamlet on the wheat-growing plains of northern Afghanistans Kunduz province, nobody was prepared. By the time they were beaten back for the provincial capital of Kunduz, more than 100,000 people were forced from their homes and total of 204 war-wounded were admitted to Kunduzs only trauma hospital, run by French NGO Medecins Sans Frontieres in less than a month. (AP Photo/Rahmat Gul) (AP Photo/Rahmat Gul)
--

Donald Trump’s speech on his administration’s strategy in Afghanistan — in which he announced the introduction of an unspecified number of new combat troops, without a mission and without a specified end date, in a strategy that abandoned nation building but entailed war-fighting — clearly contravened the principles of his “America First” isolationist election campaign promises.

But for academics like me who spend their time studying American strategic policy, it provided few real surprises. Rather, it merely signaled the latest stage in the cycle of the longest-running war in U.S. history — what journalists and pundits have christened America’s “forever war.”

The beginning of the ‘forever war’

The origins of the war, of course, date to the aftermath of the 9/11 attacks.

U.S. intelligence traced a link between al-Qaida operatives who had carried out the attacks and Afghanistan’s Taliban. In response, four weeks after those attacks, the United States, with NATO’s support, launched Operation Enduring Freedom against the Taliban and the al-Qaida fighters sheltering in Afghanistan.

As George W. Bush ambitiously asserted, even years after the war had begun,

“Our goal in Afghanistan is to help its people defeat the terrorists and establish a stable, moderate, and democratic state that respects the rights of its citizens, governs its territory effectively, and is a reliable ally in this war against extremists and terrorists.”

In articulating these goals, the George W. Bush administration had obviously failed to learn the lessons of the British Empire.

The British may have effectively ruled most of the globe for almost three centuries. But they often ineffectively wrestled with controlling what is today’s Afghanistan.

Indeed, reflective of that periodic failure, there is a poignant scene in the movie “Hope and Glory,” set in London during the Second World War, where a schoolteacher points to a giant map of the world on the wall where all the countries of the British Empire are shaded. Conspicuously, to the eagle-eyed observer, in the middle of this huge mass is a small unshaded area — Afghanistan.

It is not surprising that the Americans — supported by NATO forces — have failed to achieve Bush’s initial lofty objectives. Indeed, Trump specifically rejected them in his speech when he said that America is “not nation-building again; we are killing terrorists.”

What Trump did not say is that America has long since abandoned Bush’s goals.

Like the British before them, American forces and their allies may have repeatedly subjugated the Taliban for extended periods, but they have never managed to destroy this hard-line Islamic fighting force. This is because, for the Taliban, this is an existential war of survival. Ultimate defeat short of death is therefore not an option.

Faced with an unyielding enemy, after almost 14 years of war, billions of dollars spent, almost 2,400 American lives lost and over 17,000 wounded, Barack Obama officially abandoned the goal of nation building and of total victory. Instead, he sanctioned the official conclusion of America’s combat mission at the end of 2014.

Obama planned to withdraw all troops by 2016. Yet that plan never came to fruition. Instead, the number has fallen from a peak of nearly 100,000 in 2010 to a trough of 8,400. Those remaining have served a number of functions, including training the Afghan forces, surveillance, intelligence and logistics.

Still, in that new context, Americans didn’t fight, at least officially. Now, reputedly, they are returning to fight.

What is new and what isn’t?

Back in 2013 Donald Trump effusively tweeted, “We have wasted an enormous amount of blood and treasure in Afghanistan . . . Let’s get out!”

So why has President Trump now sanctioned a return of American combat troops as a renewed American commitment?

There are two elements to that answer.

The first, large-scale one is that American national security policy has geographically shifted in the last three decades — from deterring the Soviets in Europe to destroying militants and jihadists located in safe havens in failed and fragile states.

As Trump made clear in his speech, Afghanistan symbolizes the epicenter of the struggle against terrorism when he said,

“A hasty withdrawal would create a vacuum that terrorists, including ISIS and al-Qaida, would instantly fill, just as happened before September 11.”

Indeed, the ending of America’s combat mission in 2014 coincided with the resurgence of the Taliban. The Afghan government’s control of territory has been consistently declining since then: In early 2017 it was 57 percent of the country.

No American administration can afford to abandon Afghanistan to the Taliban for fear of bearing political responsibility for any large-scale attack that follows — anywhere.

The second element in answering the question of why Trump has recommitted to Afghanistan is far more specific. It lies in the importance and stewardship of his defense secretary, James Mattis.

Noted as a brilliant tactician, Mattis acknowledged in testimony before the Senate Armed Services Committee in June that

“We are not winning in Afghanistan, right now, and we will correct this as soon as possible.”

Mattis is vastly experienced (including in Afghanistan). He no doubt understands that a commitment of new troops, not hounded by battlefield restrictions, without a specified timetable and with a clear mission to “kill the terrorists” will enhance America’s prospects of halting the Taliban’s advance. But he also understands that this will be insufficient to achieve a comprehensive victory.

Mattis also knows that efforts to co-opt Pakistan and India in the fight against the Taliban have been tried in the past. The Obama administration did so in 2009, under the astute direction of Richard Holbrooke, and failed. He may have publicly spoken of victory, but privately, Mattis’ more realistic hope may be that this new approach may prove enough to stanch further losses and make incremental gains with limited costs.

Still, trumpeting aside, Trump’s “principled realism” in Afghanistan all looks rather familiar.

The vague set of initiatives he described are not new, nor do they add up to a grand strategy. The U.S. has moved from large-scale troop surges to clandestine special operations; from proclamations of noble goals to more modest local counterinsurgency operations; from nation building to war fighting. Yes, commanders are being given greater autonomy in the field, but as Peter Dombrowski and I detail in our book “The End of Grand Strategy,” that has long been an unrecognized truth in many military operations.

But there is at least one major difference from Obama’s policy. Press reports suggest that James Mattis was central in convincing Trump to follow this path contrary, as Trump himself said, to his “original instinct.” If true, the mantle was therefore passed. This is no longer Bush’s war or Obama’s war. It is now officially James Mattis’ war, with all the attendant risks of reward and failure.

Regardless, in the longer term something clearly remains the same: Now officially without an end date, Afghanistan remains America’s “forever war.”

Simon Reich, Professor in The Division of Global Affairs and The Department of Political Science, Rutgers University Newark