How Westeros Can Be Won: A quick rundown of Valyrian steel on "Game of Thrones" 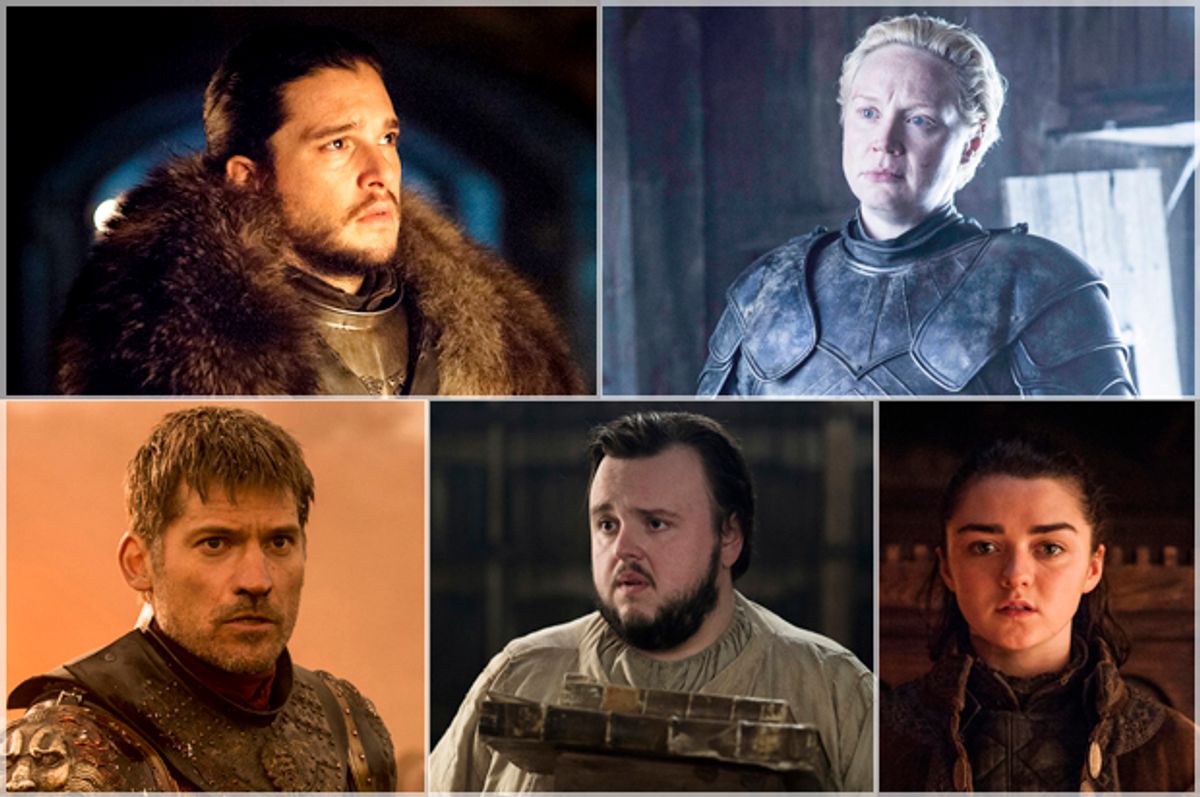 The great war approaches on “Game of Thrones,” and as many characters have predicted, the living side is woefully outmatched. An army of dead men, women, children, giants and animals, led by a blue-eyed supernatural evil known as The Night King, marches upon the wall. He may not have the fancy armor and horses of Westerosi nights, but he has the numbers and thanks to an ill-conceived not-so-special mission beyond the Wall, a gigantic flying weapon. Heckuva job, Jon Snow!

Westeros will not head quietly into that dark night full of terrors, however. There will be much roaring, clanging of steel upon steel and, every so often, the satisfying shatter of a White Walker reduced to a pile of cocktail ice. For that the great houses can thank the smiths of old Valyria for making one of the few weapons capable of destroying these supernatural foes in a single swipe: Valyrian steel.

Accept no substitutes! Because there are none.

Valyrian steel is a signature of the “Game of Thrones” universe, prized for its rarity and expense. In George R.R. Martin’s “A Song of Ice and Fire” books it is distinct from regular metals. “Valyrian steel had a darkness to it, a smokiness in its soul,” Martin writes in “A Storm of Swords.” Described as having a rippled pattern to its finish, the closest real-world equivalent is Damascus steel. Such blades are lighter and more resilient than the finest mundane steel and never have to be sharpened. They’re also rumored to have been forged with dragon fire.

In the culture of Westeros, Valyrian steel is a source of envy among the noble houses, a detail that separates the haves and the have-even-mores. HBO’s series featured Valyrian steel in the series premiere of “Game of Thrones” when Ned Stark (Sean Bean) wields the family’s comically huge greatsword Ice in carrying out a death sentence on a Night’s Watch deserter.

Sadly, Ice becomes a casualty in the War of the Five Kings, as does Ned Stark. Unlike most Valyrian steel, however, the material from which Ice was forged was not lost. And that’s bound to be handy when the dead come marching in.

One of the many ways that the books differ from HBO’s series is that within the "Song of Ice and Fire" universe, some 277 Valyrian steel weapons are said to exist. Only five such weapons have surfaced on the show. That doesn’t mean there aren’t more out there, but again -- we’re talking five against an army of thousands. Here’s a list of the weapons and the characters swinging them.

Longclaw. Originally the prime heirloom of House Mormont, Night’s Watch Lord Commander Jeor Mormont (James Cosmo) replaces the pommel with a white wolf’s head and gifts it to Jon Snow (Kit Harington) after Jon saves Mormont from a wight. By rite of inheritance, Longclaw should have passed to Jorah Mormont (Iain Glen), who disgraced his family name; in a moving exchange between Jon and Jorah in “Beyond the Wall,” Jorah affirms Jon’s ownership of Longclaw with his blessing.

Jon has put it to good use so far, having iced a couple of White Walkers with it. Based on the way Night King has been cutting his eyes at the King in the North, it’s only a matter of time until Longclaw undergoes the ultimate challenge.

Oathkeeper. One of two swords commissioned by Tywin Lannister (Charles Dance) to be forged from Ice, which the Lannisters seize from Ned Stark after he’s betrayed, imprisoned and executed. Tywin originally intended the sword for his son Jaime Lannister (Nikolaj Coster-Waldau), but Jaime, still pained by having his dominant hand chopped off by some jerk, passes it to Brienne of Tarth (Gwendoline Christie) and charges her to find and protect the daughters of Catelyn Stark, Arya and Sansa.

Widow’s Wail. Tywin made a gift of the other sword forged from Ice to his spoiled sociopath of a grandson Joffrey Baratheon (Jack Gleeson), who gives his blade an inconsiderate name and uses it to julienne a rare book presented to him by his uncle Tyrion (Peter Dinklage) and to hack open a wedding day pie. The only widow made to wail in its presence was Joffrey’s mother Cersei (Lena Headey), holding the entitled brat as his face turned purple due to poisoning. Jaime currently carries the blade and has learned to fight one-handed, using his prosthetic golden hand to parry attacks.

The Catspaw’s Blade. Lord Baelish’s enthusiasm for Valyrian weaponry is informed by his past ownership of this dagger, which has a blade made from the legendary steel set into a dragonbone hilt. The dagger was used by an assassin attempting to kill Bran Stark (Isaac Hempstead Wright), but the would-be murderer was stopped and killed by Bran’s direwolf Summer.

The blade has changed hands many times, and nobody knows who hired the catspaw. But Baelish claims to have lost it in a bet to Tyrion. During the seventh season Baelish gives the blade to Bran, who passes it along to Arya (Maisie Williams). Arya, in turn, hands it to Sansa (Sophie Turner) at the end of a tense conversation. But if there’s fighting to be done with that dagger, it had better make its way back to Sansa’s little sister.

Heartsbane. By rights, Samwell Tarly (John Bradley) should have inherited his family’s blade, but his father disowned him out of shame, forcing him to join the Night’s Watch or fall victim to a “hunting accident.” Sam steals the blade after a disastrous visit home on his way to the Citadel, probably surmising that someone other than he would find it useful in the coming war. Of course, now that he’s the last male Tarly alive, Heartsbane would have been his anyway.

But if a sword is only as effective as the person wielding it, count on Samwell getting it into the hands of somebody who can give the people of the Seven Kingdoms somewhat of a fighting chance.