Jon Stewart’s legacy: It’s been 2 years since he left “The Daily Show” but his satire still has bite

Jon Stewart may not be on “The Daily Show” anymore, but evidence of his impact on political comedy is everywhere 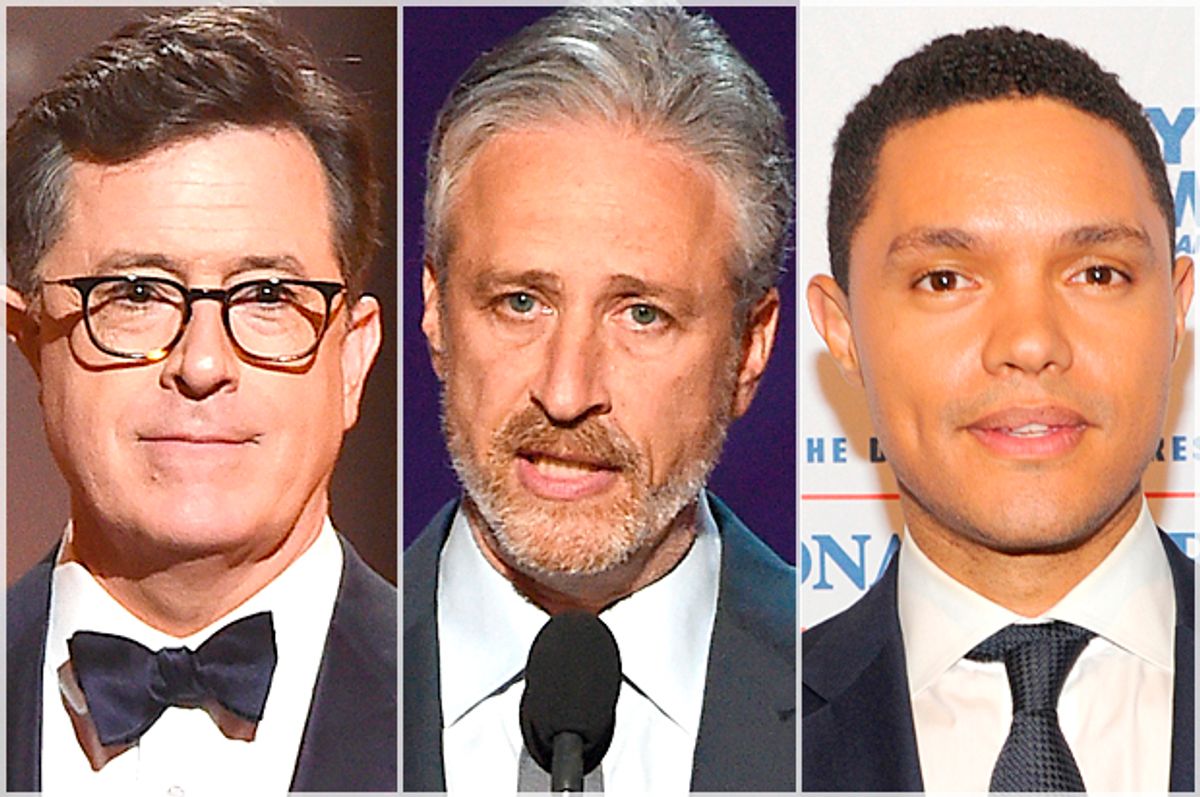 In the wake of the Charlottesville debacle, Jon Stewart took the opportunity to remind us all why we miss him so much on “The Daily Show." During a guest appearance at Dave Chappelle’s standup show at New York City’s Radio City Music Hall, Stewart reminded the audience that Donald Trump had a long history of supporting white supremacists. He then reminded the audience of the time that Trump tweeted that Stewart was a “pussy.”

It was great to see Stewart pop back on the radar to share his righteous anger and hone his sharp wit in the wake of yet another colossal Trump fiasco. But it also served to remind us of how much we miss having him on a regular comedy show. It’s been just over two years since he stepped down as host of “The Daily Show” and it is hard not to wonder how different the world might be if he had stayed on air.

I can still remember the moment when I heard that Stewart planned to step down. The news was a big blow since it came on the heels of Stephen Colbert announcing that he was also leaving “The Colbert Report” to move over to CBS to take over for David Letterman at “The Late Show.” For fans of the dynamic satire duo of Stewart and Colbert the idea of heading into an election cycle without their signature brand of comedy was not just depressing — it was horrifying.

Today the power and presence of political satire is so significant that it is easy to forget the fact that it was largely Stewart and Colbert who changed the satire landscape not just in the U.S. but also across the globe.

While satire has a long history in our nation, having even played a role in the American Revolution, there is little doubt that Stewart and Colbert took that role to a level never before seen.

During their tenure on Comedy Central a number of key things shifted. First, political satire didn’t just cover the news; it became it. Many viewers simply bypassed other news sources and went straight to Stewart and Colbert. Even though Stewart described his job as “throwing spitballs” from the back of the room and insisted that “The Daily Show” mandate was to entertain, not inform, viewers disagreed. Stewart started a trend where many viewers got their information from political comedians more often than from straight news reporters. That trend has only intensified today.

But it gets weirder. Because not only were Stewart and Colbert a source of news; they were also more trusted than journalists. In 2009, after the death of Walter Cronkite, Stewart was voted the most trusted journalist in a TIME online poll. In 2007, Stewart was tied with journalists like Dan Rather and Anderson Cooper for most trusted.

Even more fascinating is the fact that the rising influence of Stewart was not a sign of comedy dumbing down and distracting the public; it was a sign of how satire can encourage critical thinking and rational engagement with the world. Study after study showed that Stewart’s viewers were among the most informed on current issues.

Today, as our president yammers “fake news” at any information he doesn’t like, it is worth remembering that Stewart’s show really was “fake news” and yet it did a much better job of informing the public than the so-called real news. Recall that in 2003, University of Maryland researchers studied the public’s belief in three false claims  —  that Iraq possessed weapons of mass destruction, that Iraq was involved in 9/11, and that there was international support for the U.S.-led invasion of Iraq.

They found that Fox News viewers scored dead last in knowledge of these issues. Another study even suggested that those who watched no news of any kind knew more about the world than those watching Fox. Meanwhile Stewart’s and Colbert’s viewers topped the charts in knowledge of current issues.

So it made sense to worry that with Colbert moving over to a big-three network and Stewart stepping down it would be the end of an era.  But now, two years since Stewart left his post on “The Daily Show,” we can see that he may not be on four nights a week, but his comedic influence is still going strong.

One reason why we still have the Stewart effect is because he did such a great job mentoring a whole generation of comedians. Colbert admits that it was Stewart who led him to do more political comedy and less silly stuff after Stewart took over “The Daily Show,” where Colbert was one of the correspondents. Today three comedians who worked on “The Daily Show” with Stewart — Colbert, John Oliver and Samantha Bee — all have their own high-profile shows where they offer audiences political comedy with a clear Stewart influence. "Daily Show" correspondent Jordan Klepper is set to launch his own show in a few weeks as well.

But Stewart’s impact wasn’t just limited to comedians who worked on his show. Stewart influenced professional comedians and citizen satirists both in the United States and abroad. "The Daily Show” under Stewart sparked a huge range of satirical news shows modeled after it. For instance, Egyptian comedian Bassem Youssef clearly used him as a role model for “Al Bernameg” (literally “the show”). His show reached around 30 million viewers and set records for successful political comedy in the region. After he fled Egypt for the United States, Youssef worked with Fusion on a series called “Democracy Handbook,” where he travels across the country and learns that our democracy is “one hot mess.”

So despite Stewart's absence from nightly TV, his impact is everywhere. Even more important, much of this Stewart-inspired comedy is its own unique form of political satire. Stewart might have inspired these comedians, but they have crafted their own brands and are by no means only copycats of his work.

One of the first signs of this sort of creative influence came as John Oliver started to really hit his stride with his HBO show “Last Week Tonight.” Oliver took the Stewart model and adjusted it to his own interests and skills. Oliver offers viewers a brilliant long-form comedy that allows him to infuse depth and detail into the issues he covers.

Oliver also broadened the scope of his attacks, moving away from the Fox News-driven material Stewart favored to a whole host of issues, covering everything from FIFA to government surveillance to the food industry. Even more interesting is the way that Oliver’s comedy has influenced public dialogue and political action. Two years ago, Oliver’s comedic coverage of televangelism and “prosperity gospel” led to pressures on the IRS to remove tax-exempt status from these “churches.” More recently, Oliver’s coverage of the coal industry got him sued.

But it may be Oliver’s segment on candidate Trump — seen over 32 million times — that is the best example of how Oliver has continued on the tradition of Stewart’s comedy and added his own special flare. It’s a must-see segment that coined the phrase “Make Donald Drumpf again!”

Let’s not forget Trevor Noah, either. Noah had the tough job of taking over for Stewart. And despite a rocky start when some of us, myself included, thought Noah wasn’t the right choice, he has clearly stepped up in the Trump era.

Noah was on break the week of the Charlottesville events, but when he and the team came back on air, they hit the ground running.

Like other comedians, Noah reeled at the craziness of a president willing to defend Nazis, a move he points out that even apartheid South Africa wouldn’t do. But Noah reserved his real critique for Trump’s supporters. Noting that 67 percent of Republicans, according to one poll, approved of how Trump handled the Charlottesville attack, Noah called them out: “Here’s the thing: if so many of Trump’s supporters are willing to give Nazis the benefit of the doubt, then clearly anything goes,” he said. “There is no line that they won’t cross and, clearly, no cross that they won’t burn.”

Then in his segment after Trump’s loony Phoenix rally, Noah quipped, “I’m so glad we did not elect an irrational woman as president.”

When Stewart left his show, he reminded his audience that his goal had been to go after the bullshitocracy. The good news, he told us, was that the bullshitters had gotten lazy and going after them was sort of fun. The best defense against bullshit, he reminded us, was vigilance: “So, if you smell something,” he smirked, “say something.”

Two years on, there is still plenty of bullshit to smell, but the good news is that Stewart gave us great training in how to say something about it.