"Terminator 2" made — and almost ended — Robert Patrick's career: "I kept getting offers to play another robot"

Salon talks to the "T2" star about becoming the T-1000, his past with addiction and how he pushed past typecasting 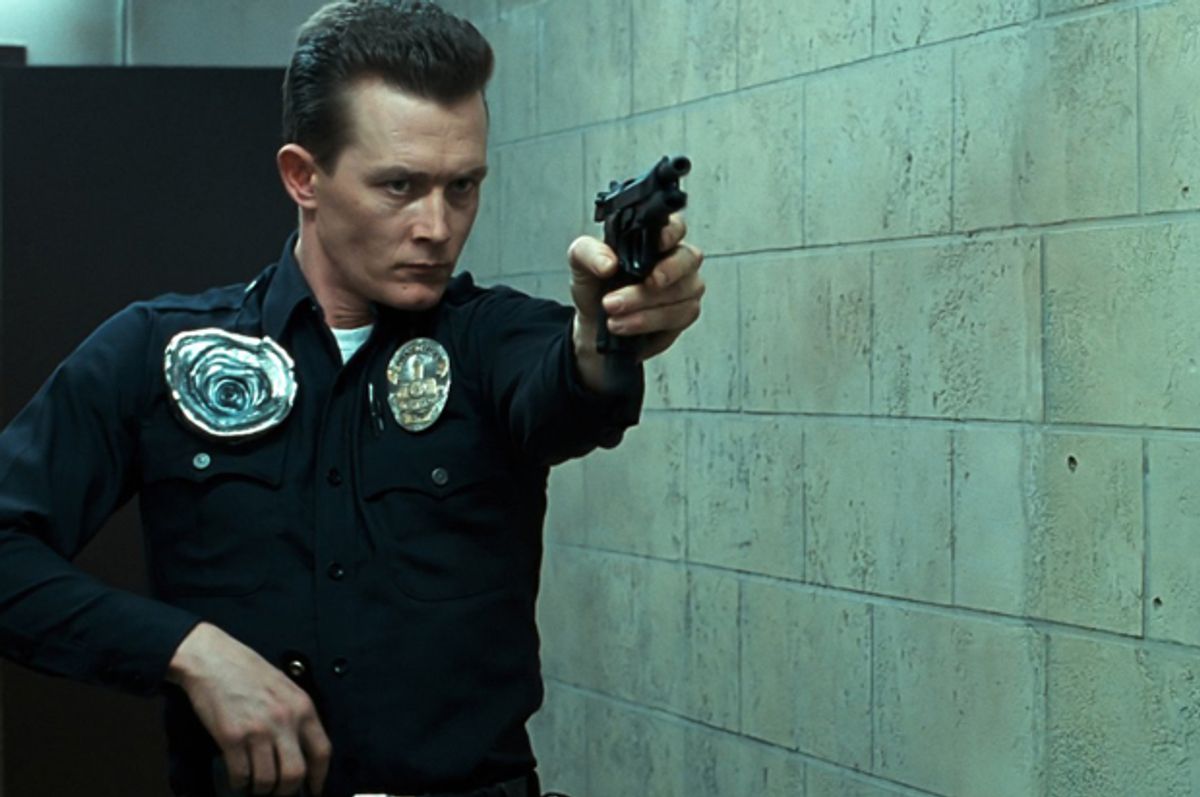 Before he was cast alongside Arnold Schwarzenegger in one of the biggest blockbusters of all-time, “Terminator 2: Judgment Day” (now in theatrical re-release with 3-D conversion by director James Cameron), Robert Patrick was literally living out of his car. Working nights in an LA bar and days on a handful of forgettable Roger Corman straight-to-video features, work was slow and money was scarce. With a drinking and drug habit escalating, Patrick scored a brief part in “Die Hard 2” as one of lead baddie William Sadler’s henchmen. Looking back at Patrick’s scenes, his face a blank slate of steely menace, one can see a glimmer of what Cameron saw in Patrick for the T-1000 role: a cold ruthlessness with zero regard for humanity.

In a career that spans three decades, the Marietta, GA native battled for years with the role that has come to define him. Along with mid-‘90s sobriety came a slew of juicy supporting roles, culminating in his memorable turn as the hapless gambling family man David Scatino on “The Sopranos” and a two-year run on “The X-Files” following David Duchovny’s departure. Along with “T2” (in theaters now), Patrick will appear with Heather Graham and the late John Heard in the upcoming outlaw saga “Last Rampage.”

Salon caught up with Patrick to discuss the iconic “Terminator 2” and how spirituality and self-reflection brought him out of the cycle of addiction.

Billy Idol got into a motorcycle accident. Blackie Lawless of W.A.S.P. was considered too tall. How did the T-1000 role find you?

Billy Idol was cast, but got into the accident and fucked his leg up. Ironically, I think he was riding a Harley at the time, like Arnold does in the movie. That paved the way for a young Robert Patrick to get an audition with the great casting director Mali Finn. They were after a particular look, and my agent sold me, at the time, as a cross between David Bowie and James Dean. I walked in to the audition wearing all black. That got Mali’s attention, and she said, “Let me see you create an intense presence.” She said, “Whatever you’re doing right there, I want to get it on video.” I didn’t realize, but James Cameron was looking for an unknown. I had done about 7 movies for Roger Corman at that point, and “Die Hard 2.” I was doing a play at the time of the “T2” audition, and I was good on my feet. Basically what you see on-screen is what I came up with in the audition. I hadn’t even seen the script yet, but once I read it, I knew my instincts were right on.

That came up on the spot. Jim said, “I want you to wag your finger at them, like no-no-no.” I went with it, but the whole time we were shooting, I was battling with how self-aware was the T-1000? We were trying to leave no charismatic imprint on the role, other than just relentless pursuit. Portraying something without a lot of dialogue, it became all about physicality and body movement. I had to think about, “How would this thing run? How would he move?” That was the battle, and I seriously considered, “Would he wag his finger like that?” The theory that Jim and I were going with was that the T-1000 was the baddest fucking thing walking the earth. He didn’t have to act like a badass. A cool monotone seemed more inhuman and threatening to us. There’s a complete lack of compassion, like HAL 9000 in "2001." “What are you doing, Dave?” We kinda stole from that.

Had you seen “The Abyss” before the audition? Did that help you to wrap your head around what [Cameron] was going for?

I had seen it, and I loved it. I was already a fan of Jim Cameron going in. I was aware of the technology he planned to use on “T2,” and once I was cast and he showed me the storyboards, I was blown away. It looked so cool. The artistry of it was imaging how a bullet hitting something made of liquid metal would look on-screen. If it took a bullet wound, instead of being rigid, it would be fluid. Even talking about it 26 years later, it’s still fun to think about.

I read the Hollywood Reporter 30th Anniversary of “Predator” story a few months back, and it sounded like Schwarzenegger was like a big brother who played too rough on set. What were your off-screen interactions with him like?

He was wonderful to me, and everybody that I saw him interact with. He was very complimentary, and would give me a thumbs-up when he witnessed some of the physical stuff I was doing. He admired my work ethic, and appreciated my commitment to the role. I stuck to myself a lot purposefully. It was kind of a method thing, in the sense that I didn’t want to be buddies with anyone. Even when I walked to set, I walked like the T-1000. I didn’t want to lose the ability to portray it, so I kept it close to me. I didn’t fuck around or kid around with many people on the shoot. I don’t remember having much downtime, or time to relax with people. But Arnold was great. He was a lot of fun to watch work and a lot of fun to work with. He was always very professional.

Was this the period in your life when you were battling drug and alcohol addiction?

I was actively participating in drugs and alcohol when I got the role, unbeknownst to anyone that was hiring me. I was a consumer. I smoked two packs a day. Being an ex-athlete, and realizing that I was taking on one of the most athletically challenging things of my life, I was going to have to eschew all that. I set it all down; cold turkey. I consumed no alcohol or drugs, from pre-training, shooting, and right up until I wrapped. I didn’t smoke any weed, or anything to alter my mood. I should have stayed sober, but being the alcoholic I was not aware I was at the time, as soon as I completed “T2,” I went right back to my old ways. I wasted about four years after that. I got sober right after I did “Striptease” with Demi Moore. I’m really grateful, because the next movie I did where I was completely sober was “Cop Land,” which is one of my best performances.

For a long time, I never thought I had a problem. I thought I was just like everyone else. Everyone I was with was doing the same things I was, and I didn’t realize that we all had a problem. It took me a long time to realize I was abnormal. I’m grateful you asked the question, because I would like to say that a lot of that behavior was tied into my insecurities, which were a lot more prevalent when I was a youngster. I’m 21 years sober, and my life has benefited greatly. I have a sponsor, and I try and live by example. I’m a devout Episcopalian, and it took me a long time to get honest and get to know myself. The thing that was really lacking in my life was spirituality. My brother is in the music industry, and he’s sober. I know he wishes he could have those years back that he spent under the influence. He’s lost a couple of really good friends lately.

Was “Die Hard 2” your first encounter with big, Hollywood egos?

It was, but not Bruce Willis! He was fantastic to me, during the brief interactions I had with him. It was my first big, studio movie. Jim saw it on the big screen when it came out, so that benefited me greatly during my auditions for him. I’ve never really had that many problems with people, and I’ve worked with a lot of big people. For me, the bigger the people, the nicer and more secure they are. One of the nicest guys I’ve ever worked with was Matt Damon. I played his daddy in “All the Pretty Horses.” He’d say, “Hey, I’m going to craft services. Can I get you a coffee or anything?” The only people I have problems with when working on movies are the really insecure people that act out in a bad way.

I’ve read that Cameron can be pretty rough on-set. Is he like the Bobby Knight of directors, in that he’s really tough, but gets the job done?

Everybody’s got their own personalities, and that’s what makes life great. We’re all so different. Jim is an intense guy, and if you’re not ready for an intense guy, you might have a problem with him. I dealt with it in a really funny way, by resorting back to a military mindset. He would explain the setup, and I would take it as an order. I would say, “Yes sir,” and try and achieve what he wanted me to achieve. No back-talk. He’s only a couple years older than me, but I gave him that respect because he was my commander and leader. “T2” is basically me following orders the whole time.

Did you experience a Mark Hamill syndrome after “T2”? Drugs and alcohol aside, did you feel boxed in by this iconic role?

Absolutely, and to this day, I’m still processing all that. I did feel boxed in, and I couldn’t get work. For about the first year and a half, I couldn’t get a job. I kept getting offers to play another robot. I just couldn’t do it, even though I didn’t have any money. Budweiser wanted to do a commercial with me as the T-1000, but I couldn’t do something like that to cheese up the legacy of “T2.” I got paid scale on “T2,” so I really was broke. At one point, I had to look around and say, “Fuck! Was this a fluke?” I started drinking again, put on weight, then got really angry with myself for losing my physique. I grew my hair long, and by changing my look, I thought that maybe if I don’t walk into the audition room looking like the fucking T-1000, someone might hire me. Then I finally got a job! I did this thing called “The Cool Surface” and then “Fire In the Sky.” When the director hired me, he had no idea I was the guy from “T2.” He said, “Wait a minute — you’re that liquid metal guy?” There were some good movies in there, like “Cop Land,” but there’s a lot of stuff you probably wouldn’t want to see.

Then “The Sopranos” happened, and I thought, “Fuck, there’s great TV happening.” I had never really tried that. Those “Sopranos” episodes were great, and suddenly Hollywood looked at me in a different way. I went on to do “The X-Files,” and I was off and running. Now, I do everything: studio movies, TV and independent movies.

Is “T2” the one you want to be remembered for, or are there projects closer to your heart?

I would love for people to always remember me from “T2.” I would also love if people appreciated some of the other movies I did as well. I’m an actor, and the only thing I have that’s going to leave any kind of a legacy is my body of work.