One dead in Charlottesville. Ten dead or missing at sea. Zero words spoken by Donald Trump 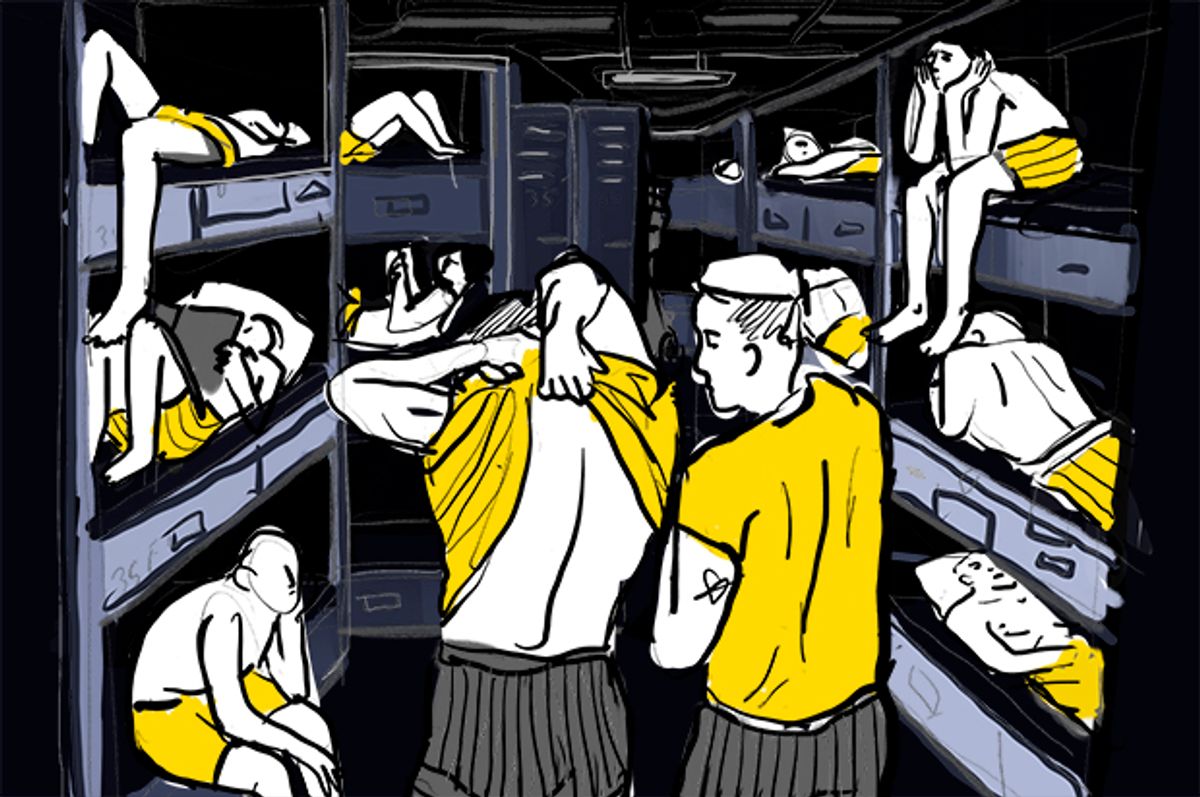 Let me describe for you the chandelier above Trump’s bed in his bedroom in Trump Tower. It’s a gigantic circular thing, looks to be about four feet in diameter, made from strands of cut crystals strung from the circumference of the circle to a gathering point at the center, which is strung with even more cut crystal in a smaller circle, below which hangs a single crystal ball that’s got to be five, maybe six inches around. Below the chandelier is the Trump bed itself, one of those gigantic “California King” things, at the top end of which stands an elaborate gilded headboard, swirls of gold-filigreed wings surrounding what appears to be a crest or mirrored circle, below which stretches a deeply cushioned white panel of some sort — silk, maybe? — with four king-size pillows artfully arranged against it. At the other end of the Trump bed is a gilded bench, more gold filigree supporting more white cushioning, atop which perches a decorative array of coffee-table-size books and what looks to be a pile of what’s known in the trade as “shelter magazines.” Let’s not bother with the rest of the room, except to say that mirrored walls play a large role, and there are at least two marble columns in evidence. Oh, almost forgot the coffered ceiling above the bed, painted with what appear to be cherubs or angels, flying around the chandelier as if it were the sun. I’ve been to Iraq, and I’ve been in four Saddam Hussein palaces over there, and that room in Trump Tower would fit right in with the decor of any one of them, right down to the flying cherubs and about umpty-eleven yards of gold leaf.

Now let me describe to you the “bedroom” typically occupied by enlisted sailors aboard a United States Navy destroyer such as the USS John S. McCain, which was involved in a collision with a tanker off the coast of Singapore last Sunday. It’s called a “berthing compartment,” and it was one such berthing compartment on the McCain that was flooded in the collision with the tanker, taking the lives of 10 sailors, the bodies of only two of whom have been recovered, the other eight having been declared missing and presumed dead. A similar berthing compartment was struck on the USS Fitzgerald on June 17 in a collision with another tanker, causing flooding that took the lives of seven sailors. A berthing compartment is less of a room than it is an array of triple-stacked bunks, arranged along a central access area that’s about three to five feet wide, depending on the arrangement of the bunks. The bunks themselves are spartan affairs, maybe 24 inches wide with about 24 inches of headroom with a single drawer beneath each bunk for storage. Depending on its location within the ship, on the other side of the walls of the berthing compartment can be either the sea — which was the case in the compartments on both the McCain and the Fitzgerald — or perhaps a fuel tank, or a ship’s magazine stuffed with ammunition for its guns, or maybe the shafts of the ship’s screws. According to a friend of mine who is retired from the Navy, if you’re unlucky enough to be berthed there, the shafts “make loud rumbling, grinding noises all day and all night — remember, these are war ships, not cruise ships, so they keep moving, they’re always on patrol, 24 hours a day, seven days a week, they never stop, the noise never stops, and some of the bunks are ‘hot bunks,’ where one guy sleeps, and when he goes on duty, another guy takes the same bunk, so there’s no privacy at all, just the relentless duties of standing watch.”

Now, I don’t know where Trump was sleeping on either June 17 or August 20. He might have been in his bedroom at the White House, or he might have been at one of his golf clubs, or one of those nights might have been the one he stopped off to stay in Trump Tower. I’m not interested enough in the president’s peregrinations to track them, but I can guarantee you that he wasn’t in a two-foot by seven-foot bunk with two feet of headroom surrounded by 20 or more other bunks, listening to the screws of a destroyer churn relentlessly through the sea, or up against the ship’s hull with only a few inches of cold-rolled gray painted steel between himself and a crowded shipping lane somewhere in the Pacific. We don’t want him out there on a naval destroyer, of course. We want him in the White House, taking care that the laws are faithfully executed, and upholding and defending the Constitution, and resting himself up so he can arise the next morning and subject himself to whatever form of video or cartoon-illustrated intelligence briefing they’re providing for him these days.

In short, we want this president, like every other president before him, to be doing presidential type things. But I can guarantee you that last week, and the week before that, and the week following June 17, there was one presidential type thing that this president wasn’t doing, and that was deigning to speak out loud about the loss of the lives of the brave sailors serving on the two destroyers, or the loss of the life of Heather Heyer in the white supremacist terrorist attack in Charlottesville. No, Trump turned, as he always does, to thumb-thwacking his condolences on Twitter. About the casualties on the Fitzgerald, he tweeted, “Thoughts and prayers with the sailors of USS Fitzgerald and their families. Thank you to our Japanese allies for their assistance.” About the USS McCain, he thumb-thwacked: “Thoughts & prayers are w/ our @USNavy sailors aboard the #USSJohnSMcCain where search & rescue efforts are underway.” About Heather Heyer, he waited four days after her murder and then tweeted this bit of dandy doggerel: “Memorial service today for beautiful and incredible Heather Heyer, a truly special young woman. She will be long remembered by all!” So nice he added the exclamation point to crank up the authenticity of the four-day-late sentiment.

Trump had no less than three major occasions to speak of the loss of the lives of the sailors who patrolled the Pacific under his orders. He could have mentioned them in his speech last Monday at Fort Myer before an audience of military men and women, when he announced his big “new” Afghanistan “strategy” which amounted to a recycling of Obama’s and Bush’s Afghanistan strategies. He could have mentioned the sailors who died aboard the Fitzgerald and McCain when he ranted and raved to an audience of adoring supporters the next night in Phoenix. He could have said something about those who gave their lives in service to their country the following day when he addressed an audience of military veterans when he spoke to the convention of the American Legion in Reno. He could have mentioned Heather Heyer anytime he opened his mouth in the vicinity of a microphone since she died at the hands of a white supremacist two weeks ago in Charlottesville.

But he didn’t. He didn’t say one fucking word about any of them. He didn’t acknowledge their sacrifice. He didn’t acknowledge their service. In the case of Heather Heyer, he could have paid tribute to the fact that she died exercising her rights under the First Amendment of the Constitution he is sworn to uphold and defend. But he didn’t. He kept his mouth shut about the dead and instead mostly talked about himself, which is really the only thing he knows how to do.

This is because our president doesn’t care about anyone other than himself. To the extent that he pretends to care about anyone else, it’s about people like him. He cares about billionaires. He cares about generals. He doesn’t care about sailors being killed in their bunks on patrol in the Pacific. He doesn’t care about citizens being killed walking down the street of an American town protesting white supremacy and neo-Nazis and their torch-lit anti-Semitism. He cares only about Trump, and for that reason, and for that reason alone among all of the other reasons you or I could think of, he is not fit to serve as commander-in-chief, and he is not fit to serve as president of the United States.