Why tourists go to sites associated with death and suffering

By Daniel B. Bitran 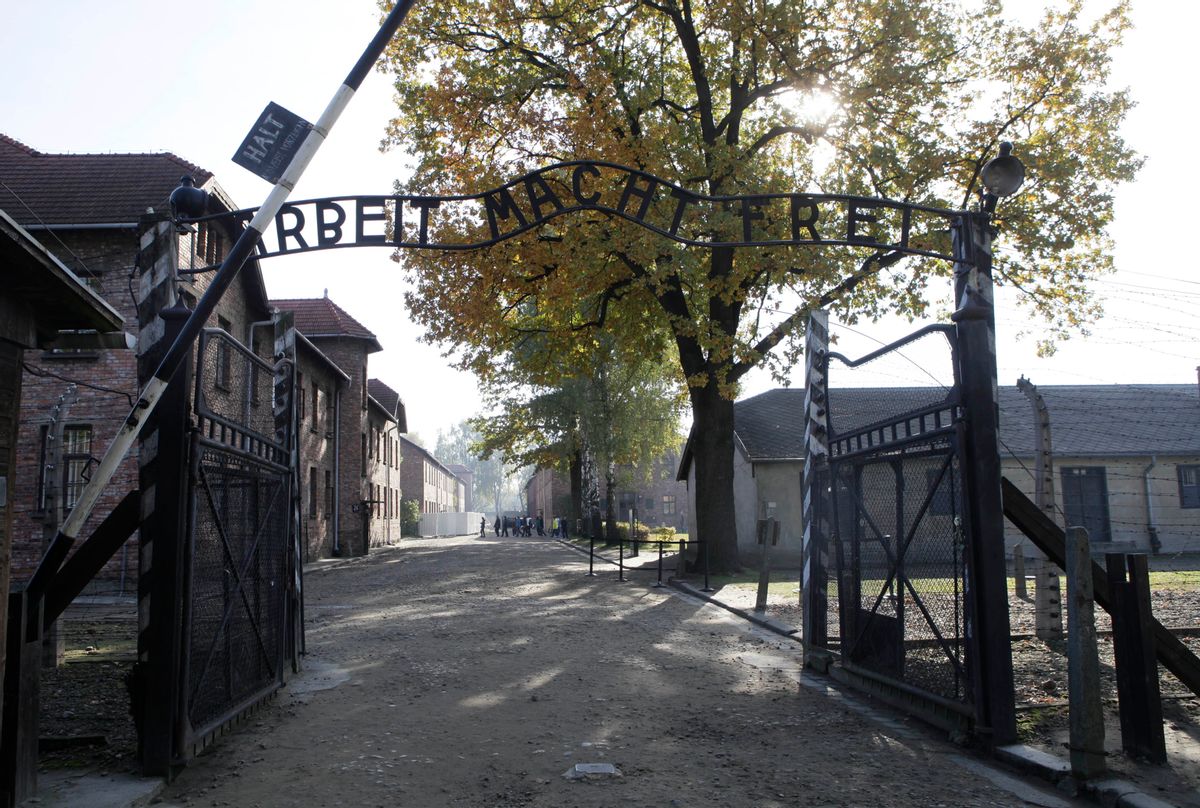 FILE - In this Oct. 19, 2012 file photo the entrance with the inscription "Arbeit Macht Frei" (Work Sets You Free) gate of the former German Nazi death camp of Auschwitz is pictured at the Auschwitz-Birkenau memorial in Oswiecim, Poland. A 94-year-old former SS guard at the Auschwitz death camp is going on trial Thursday, Feb. 11, 2016 on 170,000 counts of accessory to murder, the first of up to four cases being brought to court this year in an 11th-hour push by German prosecutors to punish Nazi war crimes. (AP)
--

On a beautiful summer day in 2016, as I walked with a group of college students along a well-trodden path sprinkled with needles and cones from majestic pine trees, our mood was somber and morose. The chirping of birds and the burning off of the dew on the grassy hills by the rising sun in this idyllic setting did not help either.

We were cognizant of what had happened here not too long ago.

This place — the Ponar Forest — is the site where 72,000 Jewish men, women and children from Lithuania’s capital, Vilnius, and nearby villages were massacred by the Nazis and their collaborators.

I am an educator of the Holocaust, and my travel course takes students through Central Europe to a number of Holocaust sites. The aim is to provide students with a hands-on learning experience.

However, some could well argue that this course is just another form of “dark tourism” — an interest in locations that are associated with human suffering and death.

What is so problematic about dark tourism? And are there redeeming features that make it worthwhile?

In January 2016, Otto Warmbier, an American college student, was arrested in Pyongyang, North Korea, for allegedly stealing a political propaganda poster. He was sentenced to 15 years of hard labor after a one-hour trial. A mere 17 months later, Warmbier was released to his parents in a vegetative state. He died a few days after.

Warmbier was on a trip advertised by Young Pioneer Tours to destinations that, they said, “your mother would rather you stayed away from.” This tragic incident vividly illustrates the perils associated with certain locations.

This then is what is referred to as “dark tourism.” It involves traveling to sites associated with death, natural disaster, acts of violence, tragedy and crimes against humanity. It could also include travel to dangerous political hotspots.

While data about the number of people embarking on dark tourism are not readily available, there are indications that it is becoming more popular. Over the past 20 years there has been a dramatic increase in the number of peer-reviewed articles on dark tourism. From 1996 through 2010, between three and seven papers appeared annually; from 2011 to 2016, that number increased to between 14 and 25. My own Google search of “dark tourism” yielded nearly four million hits.

Some scholars have argued that dark tourism is akin to voyerism: that is, fulfilling a desire for the forbidden. Other researchers though have found little evidence that people are interested in death per se. A commonly reported motive seems to be learning about past events, a curiosity that drives an interest in such sites.

Of course, it is hard to say with certainty what the real motives might be. Studies rely on self-reported data, and respondents in such studies like to be perceived in a positive light. This is especially true if the questionnaire touches on a sensitive subject that may reveal a disquieting or troubling characteristic.

Ethics of travel to some spots

Nonetheless, there is an important ethical dimension to dark tourism. Take the case of tourism in North Korea. Proponents have argued that anti-American sentiment may be decreased by the people-to-people contact enabled by such tourism, or that such visits may create a subversive effect. Proponents believe through such exposure North Koreans may come to appreciate the liberties enjoyed by people in the developed world and begin to question their own ways of living.

Indeed, the past decade has opened up North Korea to tourism, allowing citizens from most countries to visit. Critics, however, argue that the average North Korean does not interact with tourists; the guided tours are well-scripted, allowing engagement with the regime and not the people. Moreover, tourism legitimizes the regime while enriching it at the same time. In North Korea, for example, it is estimated that tourism is a US$45 million per year industry.

The question that emerges then is whether it is ethical to promote a repressive regime that is repeatedly cited for human rights violations. This question is germane to all tourist locations that have questionable human rights records, from China to Hungary.

And what of places of human suffering from disasters such as the Chernobyl nuclear power plant in Ukraine, or from fascist regimes that are no longer in existence such as the killing fields of Phnom Penh, Cambodia? Are they free from ethical constraints?

Few would doubt that it is immoral to benefit from others’ calamities, no matter how far removed these incidents may be from our present time or place.

So how do we in particular, as Holocaust educators, escape the trappings of dark tourism?

I strive to provide my students with an educational experience that pays tribute to the social, cultural and artistic aspects of European Jewry. For example, we pay a visit to the Polin Museum in Warsaw, which tells the history of Polish Jews. At the same time, however, going to the former concentration camps of Auschwitz, Majdanek or Treblinka does privilege places of human suffering and death.

How then do we maintain our intended purpose?

An important point of emphasis in our Holocaust travel course is the need to respect the sites we visit. My students are told clearly, especially in places of death and martyrdom, that exhibits and artifacts are to be inspected visually. Never should they reach out to touch or take anything.

Students can, at times, fail to understand the criminal meaning of some acts and get into a great deal of trouble. In 2015, for example, two teenagers were arrested for taking found objects at Auschwitz. More recently, another student stole some artifacts from Auschwitz in order to complete an art project for her graduate degree.

When places of death and torture are respected from the perspective of valuing the sanctity of life and not seen as a source of titillation resulting from a voyeuristic need, then these behaviors, I believe, will not occur.

Indeed, the atmosphere at the Auschwitz museum cafe may appear to be Disneyland-like, with visitors casually resting over their cups of coffee or ice creams. In fact, however, it is the attitude or intent of the visitor that ultimately determines dark tourism’s presence.

Even in Auschwitz, then, a visit per se is not a sufficient criterion for dark tourism. Snapping a smiling selfie at such a site, however, should be of some concern.

Daniel B. Bitran, Professor of Psychology, College of the Holy Cross

MORE FROM Daniel B. Bitran