Arya versus Sansa, the other battlefront on "Game of Thrones"

Sisterhood may be powerful, but sibling rivalry is poisonous. In this match-up, anything can happen 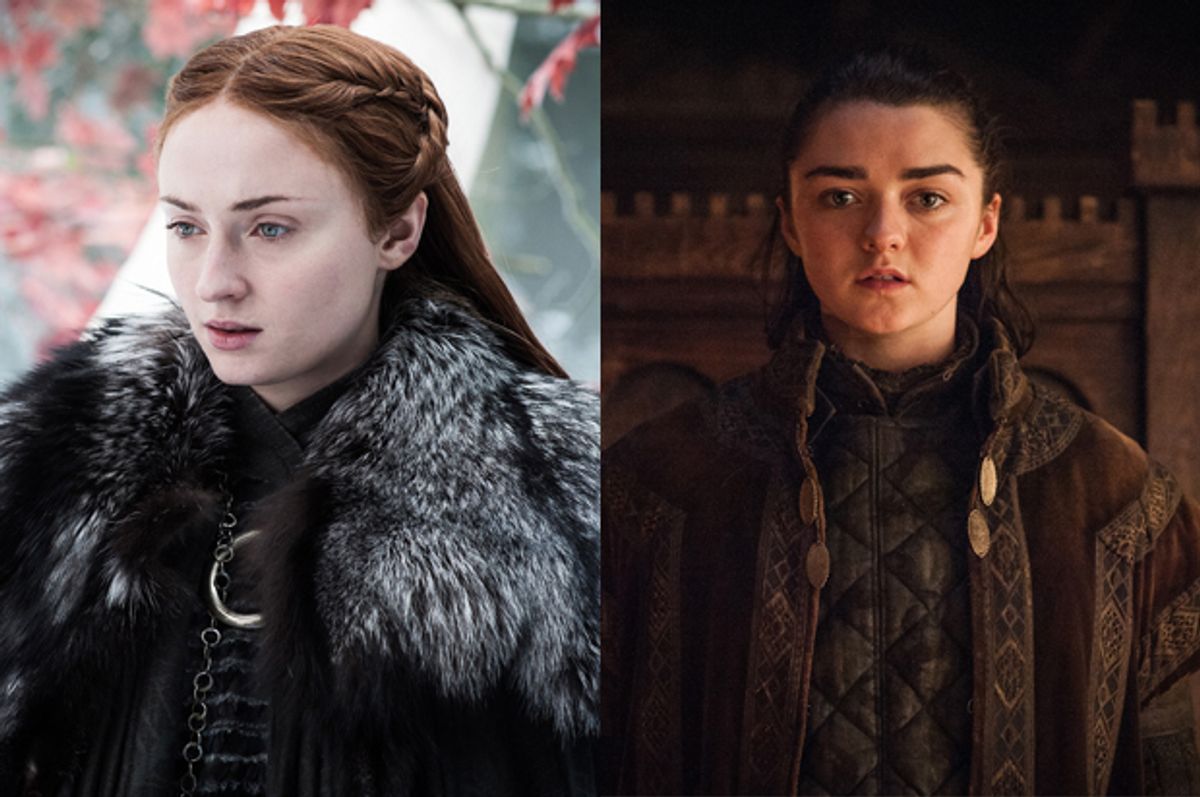 As “Game of Thrones” careens toward the seventh season finale, the action in King’s Landing is designed to draw the lion’s share of our attention. The quieter second front inside the walls of Winterfell is intensifying too, as Arya Stark (Maisie Williams) and her older sister Sansa, the Lady of Winterfell (Sophie Turner) square off in dark rooms.

Arya suspects Sansa desires power in the North and is willing to wrest the seat away from Jon Snow to get it. Sansa appears besieged by her sister, who threatens Sansa’s life in "Beyond the Wall" before, curiously, handing her the blade that was used in an attempt to murder their brother.

Lurking in the wings waits Petyr Baelish (Aidan Gillen), the man who has been manipulating the Starks since the beginning and who may, indeed, be aggravating a festering emotional wound between the sisters to achieve his own ends.

Depending on how a person views these characters and the Winterfell intrigue subplot in general, the outcome of the Arya versus Sansa spat may be more exciting than any armistice negotiations. The meeting between Jon Snow and Cersei Lannister is a crucial turn, but the resolution of the sisterly chill in Winterfell may only be achieved with the demise of a major character.

D.B. Weiss and David Benioff wrote the finale, and how they handle this situation and its denouement may improve our view of a creatively uneven season, or add more kindling to the criticism bonfire. This seventh season has featured some of the greatest moments of “Game of Thrones,” including the technical marvel of Daenerys’ attack on the Lannister army. It also showcases many of the writers’ laziest indulgences. And few opportunities can bring the latter into relief like plotting the machinations of a Big Death.

“Game of Thrones” actors, directors and producers love to tease the audience with the promise of something shocking happening, only to yank the rug out from under our feet at the last second. In pre-season interviews, Turner played up the possibility that her character might not be trustworthy, despite her ladylike appearance. And in the penultimate episode Arya implies as much, taunting Sansa with a death threat that makes the younger Stark seem homicidal.

If this is a misdirect made to confuse the audience as to who is the hunter and which party is the prey, it’s also a puzzling and somewhat clumsy one. Then again, there’s something fascinating in this dysfunction in the way that it plays with the fans’ desire for the long-suffering Starks to band together naturally and easily to overcome their foes.

The remaining Starks were destined to regroup after years of believing each other to be dead, and out of all of their journeys Arya’s has been the most singularly focused. Thus in this season of homecomings, the return of Arya Stark to Winterfell was highly anticipated. Unlike Sansa, Arya spent much of her time in charge of her fate; unlike Bran, she knew what she had to do in order to become the person she wanted to be.

The Arya encountered in season 7 is extremely different, in some respects, from the child who went to King’s Landing with her father in the series’ opening episodes. But the heart of her hasn’t changed much; she’s still stubborn and holds a grudge. She’s also sure, in a way her sister claims not to be, that people don’t really change.

It’s possible that she’s right about Sansa, despite the older Stark’s protestations. Sansa may not have transformed, but she’s definitely learned from her enemies, making her as much of an asset to the North as she is a threat to her half-brother (or, actually, cousin) and his hold on power.

The varied reactions to the tension between Arya and Sansa demonstrates the substantial debt the series’ producers owe to George R.R. Martin’s character development.  “Game of Thrones” has been off-book since the end of season 5, but if this conflict moves people in the least, it’s because Martin constructed a firm foundation for each figure, granting them palpable flaws and frailties that ensure no one is purely good or completely irredeemable.

Therefore, we think we know the hearts of Arya, Sansa and all the Starks, and the Lannisters, the Greyjoys and the other nobles deemed worth following. And this ersatz sense of intimacy inspires people to assign psychologically-informed motivations to their actions that may not have existed in the writers' room.

Viewers rooting for Sansa may be appalled at Arya’s refusal to forgive what she sees as her sister’s moral failings during her time as a hostage, exemplified in a letter Littlefinger dredged up for Arya to find. Team Arya, meanwhile, argues that the Sansa the younger Stark remembers is still the girl who coveted pretty things and a pretty life and would do anything to get it, including selling out her own sister to retain the affections of a miniature tyrant.

There’s also the consideration that the same incident, their father’s public shaming and unexpected beheading, represents an ungentle fork in the road fate laid out for them that took each through extreme, challenging territory that, to paraphrase Sansa, the other could not possibly imagine. But Arya may lack the ability to accept that two family members can weather a shared trauma differently, especially when subjected to different circumstances.

Naturally this view of the Sansa/Arya conflict assumes that the “Game of Thrones” writers are writing with a deep level of insight as they move these players into position for the endgame they planned long ago. But rarely have this show’s producers demonstrated much of an affinity for the profound, especially when it comes to writing women and especially this season.

It’s more likely that they saw an opportunity to instigate a fight to distract viewers from an ending they hope we don’t see coming. Television writers rarely pass up the chance to wring drama out of two women fighting. Here, the backstory of the rivalry between Arya and Sansa allows us to accept it.

But there’s also the common memory of their father’s emphasis on loyalty -- which he idealized as a bulwark even thicker than blood. And to quote a line from a seventh-season trailer that has not yet been uttered: "When the snows fall and the white winds blow, the lone wolf dies, but the pack survives.”