As climate change warms the Northeast, some snowshoe hares stay brown all year 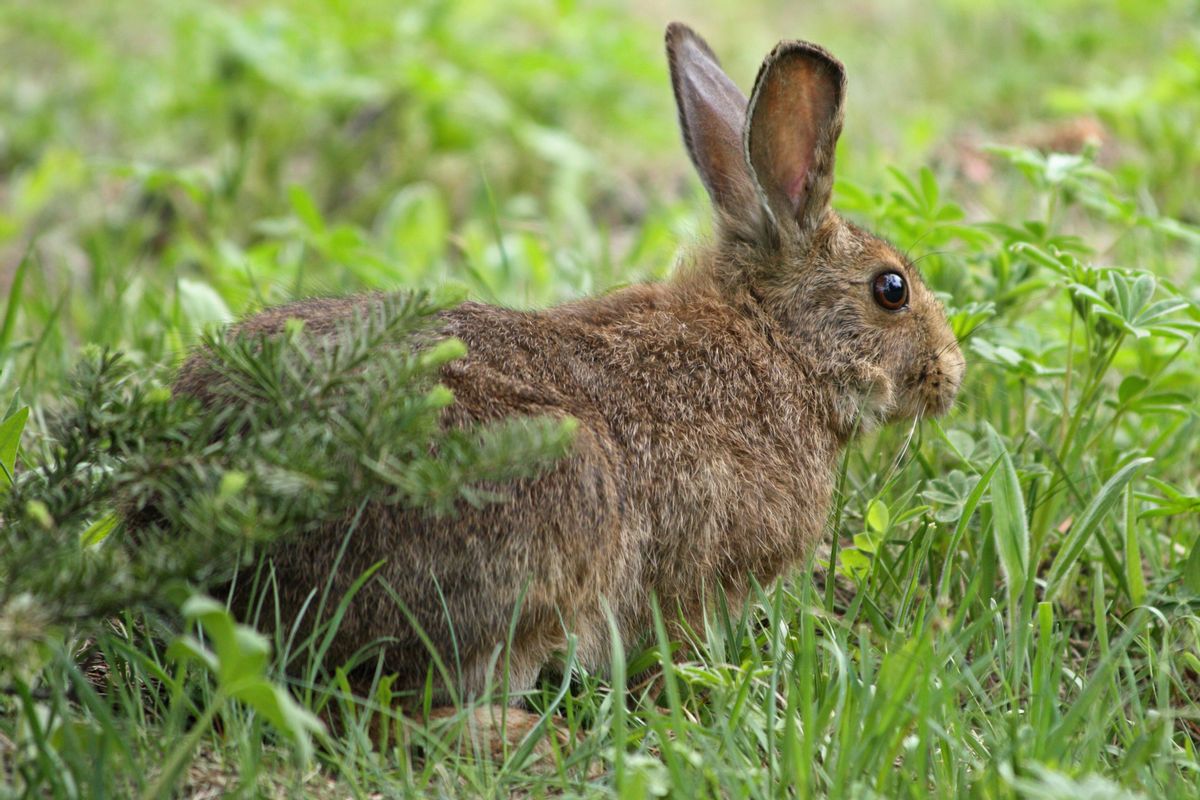 The quintessential image of a snowshoe hare (Lepus americanus) is a pure white bunny — although it is a hare, not a rabbit– nestled in powdery snow, gazing out from under the overhanging branches of a balsam fir. I can almost see my breath and hear sleigh bells just thinking about it.

But in Pennsylvania, powdery snow has a short life expectancy during our winters’ freeze-thaw cycles. In southern Pennsylvania, it’s not unusual for snowstorms to turn completely to rain, and it can happen almost anywhere in the state. As a result, in much of Pennsylvania it’s rare to sustain complete snow cover throughout winter, and will become rarer as climate change results in warmer temperatures across the state.

And balsam firs occur only in tiny, relict patches scattered across northern Pennsylvania, left over from retreating glaciers. Our forests are dominated by trees that shed their greenery every winter, such as oak and hickory. Conifers are more common to our north in New York state, New England and Canada.

For millennia snowshoe hares’ pure white coats have kept them warm and protected them from predators. But if snowshoe hares are going to make it in Pennsylvania, they will have to have to leave that balsam hiding spot and rethink their thick white winter coats. That appears to be what they are doing. In a recently published study, my colleagues and I found that snowshoe hares have adapted to the warmer winters of Pennsylvania — but it’s unclear whether they can continue to change as quickly as the climate.

Laura Gigliotti, Michael Sheriff and I recently published a study comparing physiological characteristics of snowshoe hares from Canada’s Yukon with those in Pennsylvania. We documented several interesting differences between the two groups by tracking movements of 70 Pennsylvania hares with radio collars, fitting some of them with temperature sensors and measuring characteristics of their winter coat.

As in all other studies of snowshoe hares, the ones we tracked sought out habitats with dense vegetative growth. Hares in Pennsylvania were most likely to rest in locations thick with shrubs and small trees beneath the forest canopy, where you could see little beyond 30 feet (10 meters). Our measurements indicated that these areas had at least 80 percent visual cover. We never found hares resting in areas with less than 20 percent visual cover. Even though Pennsylvania hares rarely have access to the same kind of ground-hugging cover that conifers provide their northern cousins, they appear to use native vegetation to hide effectively from predators.

In northern climates, hares select habitats that provide both hiding cover from predators and protection from cold temperatures. However, in Pennsylvania we found that snowshoe hares’ resting spots were not any warmer than locations we chose at random. It appears that for our hares, winter temperatures aren’t much of a concern.

Reinforcing that fact, we also found that Pennsylvania snowshoe hares produce relatively light-duty fur coats. The downy hairs of their underfur were 58 percent less dense than those of their northern counterparts, while their guard hairs (long hairs that protect the insulating underfur) were 32 percent less dense and 20 percent shorter. Our temperature sensors indicated that Pennsylvania hares produced less body heat than hares from the Yukon, which suggests that they have slower metabolisms.

Hares of a different color

Our most fascinating discovery was that some snowshoe hares in Pennsylvania do not change color from brown to white in winter. We captured three individual hares in January that had brown coats except for some white coloration around the nose, feet and ears. Although this phenomenon has been documented in the Cascade mountain range in the Pacific Northwest, it had never been documented in eastern North America until now.

We were not able to test the hair density of individuals that retained a brown coat in winter, so we can only speculate about why they had this unusual adaptation. We have two hypotheses: first, that the hares may have kept their summer coat because they did not need the insulation; second, that there may be some reduced predation risk for hares that retain a brown coat in an environment where persistent snow cover is unpredictable.

All of these physical and physiological differences help snowshoe hares survive in the warmer climate of Pennsylvania. Our findings are intriguing, although more range-wide studies of snowshoe hare could help us better understand how snowshoe hares contend with warmer winter conditions.

Snowshoe hare populations reach their highest densities in early successional habitat, which has dense vegetation that provides both food and cover to hide from predators. Creating suitable habitat by applying best management practices to timber harvests or controlled burns, in the right amounts and locations, could help snowshoe hare populations persist despite climate change.

Unfortunately, research in Wisconsin has concluded that the duration of snow cover is a bigger problem for snowshoe hares than the availability of forest cover. If this is true, based on projected climate change in Pennsylvania, we predict snowshoe hares’ range will continue to contract northward. We don’t have enough information to say whether snowshoe hares, even those of a different color, are adapting fast enough to persist in Pennsylvania.

Like many other species, snowshoe hares are found across a range of climatic conditions. Understanding how a species copes in different environments can help us understand where it will continue to thrive in our changing world.