The more political someone is, the more likely he or she is to think that vaccines are unsafe 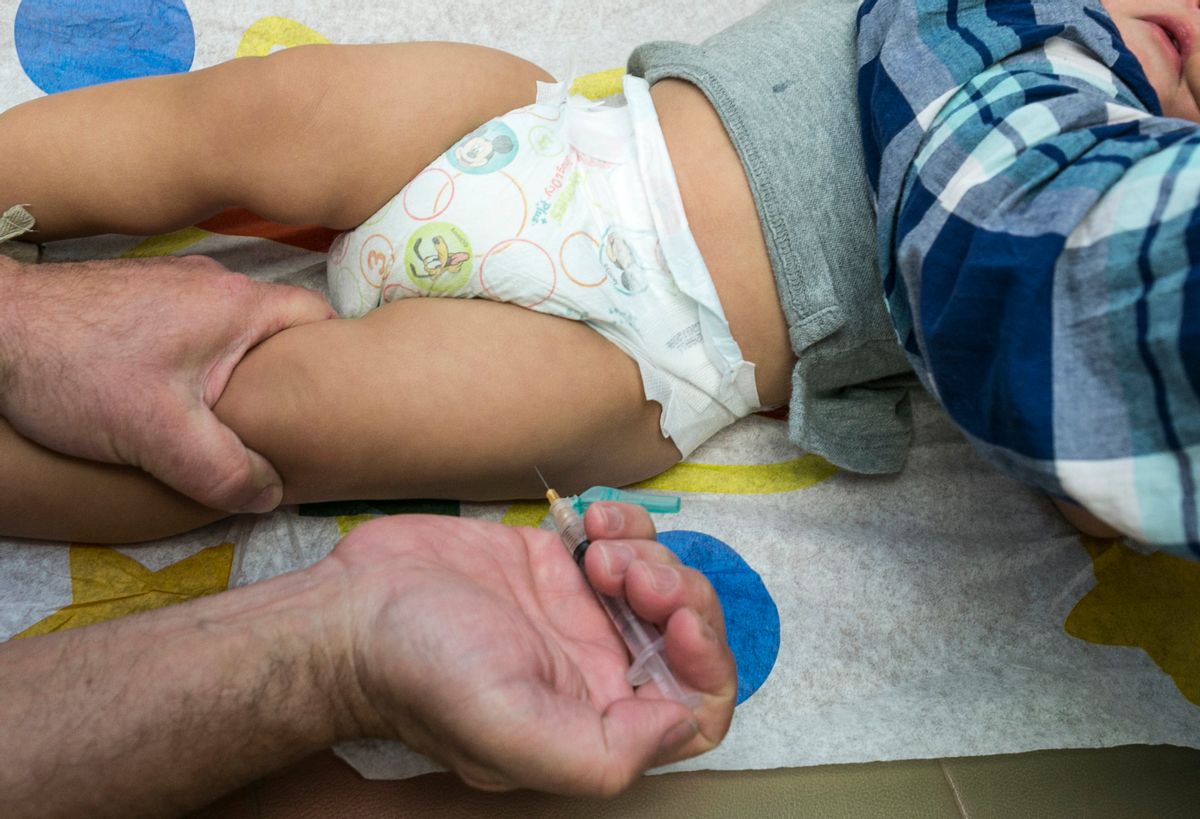 FILE - In this Jan. 29, 2015 file photo, a pediatrician uses a syringe to vaccinate a 1-year-old with the measles-mumps-rubella (MMR) vaccine in Northridge, Calif. (AP Photo/Damian Dovarganes, File)
--

When health officials learned that the 2015 measles outbreak was caused by clusters of unvaccinated children, Americans once more wanted to understand why some parents do not vaccinate their children. In our highly polarized culture, media commentators and even academics began to connect opposition to vaccination to either the left or right of politics.

So a question arises: Who is more likely to be opposed to vaccination, liberals or conservatives? As a sociologist who studies infectious disease, I took a look at this. The answer seems to depend on what question you ask.

Because the outbreak started in the wealthy, liberal enclave of Marin County, California, and because some of the best-known “anti-vaxxers” are Hollywood actors, some right-leaning media outlets connected opposition to vaccination to liberals and related it to other “anti-science” beliefs like fear of GMOs, use of alternative medicine, and even astrology. Other writers have opposed such a caricature and have argued that opposition to vaccination is actually either bipartisan or a specifically conservative problem. Academic research on the topic is also conflicted.

While historians have shown that there is a long history of opposition to vaccination in America, the contemporary anti-vaccination movement got its major boost in 1998 when Andrew Wakefield published faulty research in The Lancet that falsely claimed that the mumps, measles and rubella (MMR) vaccine was related to autism.

As to whether liberals or conservatives are now more likely to be opposed to vaccination, some researchers have suggested that, while anti-vaccination beliefs have spread to libertarians on the right, the anti-vaccination movement originates and finds its strongest support in the political left. A later article by the same researchers similarly argues that Centers for Disease Control and Prevention (CDC) evidence shows that states that voted for Obama in 2012 have higher rates of nonmedical vaccination exemptions.

When relating the answers to these questions in the Pew surveys to people’s political views, I find an interesting divergence. The more conservative and also the more liberal someone is, the more likely he or she is to believe that vaccination is unsafe.

To examine this issue, I used a statistical technique called logistic regression that allows you to examine how the probability of a certain outcome will change depending on the characteristics of a survey respondent. I used it to examine whether someone is more or less likely to think that (a) vaccines are unsafe and (b) that vaccination should be a parent’s choice depending on what political beliefs they hold.

I did this while controlling for respondents’ level of education, income, race/ethnicity, age, gender, and parental status. I used the category of “moderates” (what statisticians call a “reference category”) to compare liberals and conservatives with. Let’s first look at people’s personal beliefs about vaccine safety.

What I found is that the more political someone is, the more likely he or she is to believe that vaccines are unsafe. Those who are “very conservative” are one-and-a-half times more likely to believe this than moderates.

When we look at whether people think that vaccination should be mandatory or a parent’s choice, a different story emerges.

What explains this divergence? First we have to realize that there is a difference in the overall number of Americans who believe that vaccinations are unsafe versus the number who believe it should be a parent’s choice. The Pew surveys indicate that 8 percent of the U.S. population think that vaccines are unsafe, while 28.2 percent think it should be a parent’s choice.

Maybe it’s not about vaccines, but about who’s in power

Beliefs about U.S. vaccination policy and the role of parents’ choice may have more to do with what Americans believe about the proper role of the government and which political party is in power than what they think about vaccines.